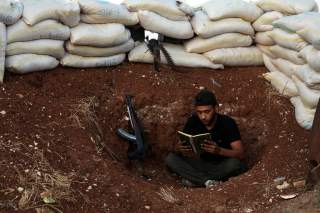 The recent coordinated bombing on the Syrian regime by America, Britain, and France—three nations that have struggled to achieve common strategic objectives in the Middle East—was not only remarkable for who took part, but also for who did not. Where were the Arab states? Nowhere to be found, because these nations are caught in a psychological malaise that is the fundamental cause of the crippling situation in which the Arabs currently find themselves.

Ultimately, this defeatist mentality is the result of a complex mix of historical defeatism, internal squabbling, distracting embroilments, and endemic corruption that has stifled development. After losing successive battles, starting with those against Israel between 1948 and 1973, the Arabs still inherently believe themselves to be militarily incapable. The sense that Iran is powerful and on the rise is belied by its third rate military and shattered economy. And instead of concentrating most of their military resources on the larger and more strategically important issues of Syria and Iraq, the leading Arab states are bogged down in a justified, but no end inter-Arab war in Yemen, a conflict with minnow Qatar, and a domestic insurrection on the Sinai.

The situation can be compared to the Napoleonic Wars, with the Arabs in the role of Prussia (and other European monarchies) and the Iranians as the French under Napoleon. The Prussian military had been defeated by Napoleon in 1806 at the twin battles of Jena and Auerstedt. A grand coalition of all the major European powers set out to defeat Napoleon's rising French imperial army. These powers had superior military might and numbers, but were hobbled by disorganization, inefficiency, mediocre commanders and a system that didn't allow personal initiative and flexibility. But above all else, the European powers, led by King Frederick of Prussia, didn't think they could actually vanquish Napoleon, and this psychological weakness led to their humiliating defeat on the German plateaus.

The vanquished mentality that has gripped the Arabs and the larger Sunni Muslim world since the creation of Israel in 1948 has resulted in some strange and surreal realities. The true threats to the region—Iran and Russia—are mostly operating without impunity in the Arab world. The Arab nations and their traditional Western allies—the United States, France and UK—are at odds and can’t muster a coordinated credible response to any vital issue—from the consequences of the catastrophic U.S. invasion of Iraq in 2002 to the disastrous JCPA Iran nuclear deal in 2016. And the best regional Arab "ally" on the ground is Israel who alone has consistently kept the military pressure on Assad, Hezbollah, and their Iranian patrons.

A look at the main Arab hotspots makes the results of this malaise tragically clear. In Iraq, the Iranians have succeeded in installing a nominal Shia-led government that indirectly fans the fires of sectarianism and eschews inter-sectional rule. And it has funded and armed Shia militias that now number in the tens of thousands. These Shia vigilante brigades continually hold the nation gripped in a near civil war even after the defeat of ISIS. Yet the Arab states have failed to manifest any credible response to the crimes of these non-state terrorist entities.

In Syria, Iran and its main ally, Russia, have largely been able to steer the course of history free of resistance. They have propped up Assad and provided him with everything he needs to commit crimes against humanity and hold his own people hostage. The countless mass atrocities attributed to the Assad regime—with nearly half a million dead and millions of refugees—are the consequences of Iranian and Russian actions. And again, no credible Arab response has been mounted.

Iran is also winning in Lebanon. The Iranians are practically destroying the Lebanese nation by using Hezbollah as a tool to supposedly fight Israel and further its own sectarian Shia agenda—an agenda that is foreign to Lebanon's multi-confessional political system of governance. The magnitude of the Arab defeatist mentality is best put on display in this small nation: the Sunni Prime Minister, Saad Hariri, is being forced to publicly support and work with Hezbollah, the party that the UN Lebanon Tribunal identified as having killed his father, Rafic Hariri, in a cowardly car bombing in the middle of Beirut in 2005.

The truly mystifying part of all these Iranian successes—carried out with almost no resistance from the Arab states—is that they were only able to take place due to a misperception of Iranian power on the part of Arab governments whose inherent weaknesses continue to color their viewpoints. The fact is that Iran’s military is mediocre at best and its finances in dire straits. Were the Arabs able to rise from their stupor, learn from their mistakes, and put together a concerted effort to rollback the Iranians, they would quickly realize the advantages of their far superior firepower and economic means.

Were they able to do so, the dismal parallel already drawn to the Napoleonic Wars would come full circle to a happy ending. For inevitably, Prussia and the other European monarchies finally defeated Napoleon at Waterloo in 1815. Then the nail in the coffin came fifty-five years later, when Otto von Bismarck, an astute scholar of warfare, led Prussia to victory in the 1870 Franco-Prussian war and secured the final defeat of any future French imperial ambitions.

In short, the Arabs, anchored on the Saudis and Egyptians, need their Waterloo in order to unleash a revitalized generation of Bismarcks. To do so will require a completely new outlook, but fortunately, it is one based on reality. The defeats of the past do not foreclose the victories of the future. The internecine bickering and small-scale skirmishes can be concluded and put aside. And the Iranian incursion can be seen for what it is—the spread of an inferior force that has only been able to get this far due to the insecurity and malaise of its rightful and more powerful opponent. Nothing less than the fate of the Middle East and the wider Arab and Muslim worlds hangs in the balance.

Nawaf Obaid, PhD, is a Visiting Fellow at the Intelligence & Defence Projects at Harvard’s Belfer Center for Science & International Affairs.

Image: A Free Syrian Army fighter reads the Quran in the rebel-held town of Dael, Syria May 30, 2018. REUTERS/Alaa Al-Faqir