Welcome to the Republican Crackup 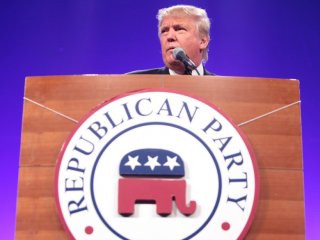 Last night Fox News went to war against Donald Trump. Only a few days earlier, Rupert Murdoch had sent out a tweet admonishing Republicans to stop sniping at Trump. The GOP needed a truce: “If he becomes inevitable party would be mad not to unify.” In line with Murdoch’s edict, as Isaac Chotiner noted in Slate, Fox’s coverage of Trump became fulsomely flattering, with Bill O’Reilly waxing enthusiastic about him.

Roger Ailes, we were told, had become sick of Senator Marco Rubio. As the debate went off the rails and Murdoch’s edict was blatantly ignored, in Chotiner’s words, “The only conclusion, in the end, is that neither Murdoch nor Ailes is exerting real control over the network. In short, it’s a mess, a lot like Thursday’s debate was.” But perhaps Murdoch took his eye off the ball during the interval between his tweet and his latest marriage to former supermodel Jerry Hall this week at Spencer House.

Welcome to the Republican crackup. The predictably vulgar Donald Trump did himself no favors during the debate by taking on Rubio’s insinuations that he’s challenged when it comes to the size of his private parts. The thin-skinned Trump responded: “I guarantee you there’s no problem, I guarantee.”

When it came to guarantees, however, Trump started trimming his stands, indicating that he’s ready to compromise on immigration—he’s receptive to negotiating the height of his vaunted wall and “softening,” as he put it, on the issue of issuing visas to highly skilled workers. Rubio looked tired and wan, but he got in a lick against Trump when he noted, ““You argue that you’re here to fight for the American worker, but when you have a chance to fight for the American worker, you’re hiring workers from overseas and you’re making your clothes overseas.”

Rubio also tried to pummel Trump on foreign affairs. He said, “The next president of the United States is going to have eight years of a mess of a foreign policy to clean up. That’s why it can’t be Hillary Clinton, and, quite frankly, it can’t be someone who simply has not shown the intellectual curiosity or the interest in learning about these very complicated issues.” Maybe so, but Trump has Rubio’s number. Rubio is a con without the artistry. What has Rubio himself contributed other than rodomontade about resuscitating the very Bush-Cheney doctrine that originally brought America to grief in Iraq?

Already the neocon claque that surrounded Rubio, the beaming little boy-con, is beginning to emigrate back to the Democratic Party. As Yale University professor David Bromwich emailed me today, “these people are Republicans of convenience even if the convenience has lasted four decades. Bill Kristol used to describe himself as a ‘Scoop Jackson Democrat’ until people stopped knowing who Scoop Jackson was. They love two things, war and Israel, and Trump baffled them by his apparent indifference to both.”

The response of many neocons to Trump’s unexpected rise is to denounce the American people. Bertolt Brecht wrote a poem after the June 17, 1953, uprising in East Berlin which was crushed by Soviet tanks. Some neocons appear to espouse the sentiments mocked by Brecht:

“The Secretary of the Writers Union
Had leaflets distributed in the Stalinallee
Stating that the people
Had forfeited the confidence of the government
And could win it back only
By redoubled efforts. Would it not be easier
In that case for the government
To dissolve the people
And elect another?"

Thus, in an impassioned essay in the American Interest, Eliot A. Cohen, a leading neocon and former Bush State Department official, decries the “moral rot” of America. What this implies for the project of exporting the American democratic model abroad is left unsaid. Quoting William James, Cohen inveighs against the softness of American culture. Militarism and moralism are synonymous. Trump himself, says Cohen, could have used a dose of the strenuous life: “Trump might have become a less upsetting figure if he had not wriggled through the clutches of the draft in the 1960s.”

But when it comes to martial valor, which Republican president told America to go shopping after 9/11? Which administration turned the war in Iraq into a theatrical show where Bush in 2003 could pretend to once more become a fighter pilot and announce “Mission Accomplished” on the deck of the USS Abraham Lincoln?

Since those heady days, America’s internal decline has become palpable. The Washington Post reports today that Memorial Bridge, the gateway to Arlington Cemetery, is rapidly decaying and will be reduced within a few years to a footbridge. Viewed from a bridge, F. Scott Fitzgerald wrote in The Great Gatsby, the city is “always the city seen for the first time, in its first wild promise of all the mystery and the beauty in the world.” But as the capital of the free world, as it used to be known, literally crumbles to pieces, the Republican Party may follow suit with a tumultuous and violent convention in Cleveland in July.