The West Continues Its Destructive Meddling in Libya 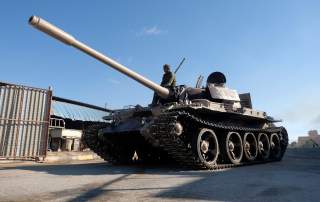 The United States and its Western allies can’t seem to stop meddling in Libya’s affairs, despite the horrid record of their previous attempts. There are signs that Libya’s prolonged internal chaos might finally be drawing to a close. Field Marshal Khalifa Haftar, the leader of one of the two strongest factions in that fragmented country, has launched a major offensive to occupy Tripoli and oust the rival Government of National Accord (GNA). Fighting has been ferocious, with more than 120 already dead, hundreds wounded, and thousands fleeing the capital. By mid-April, it appeared that Haftar’s Libyan National Army (LNA) was poised for victory, although the offensive has since stalled.

Civil wars typically end when one faction is militarily victorious. That outcome occurs more often than negotiated settlements between the warring parties. Although the Western powers might prefer the latter scenario, any resolution may be preferable to the ongoing bloody chaos. Libya has suffered from civil strife for eight years–ever since the United States led a NATO campaign to assist rebels determined to overthrow longtime dictator Muammar el-Qaddafi.

After Qaddafi’s ouster and death, Washington and its allies expected the country to make an orderly transition to a stable democracy. But as in so many other countries, such naïve hopes proved unfounded. Libya came to resemble Somalia on the Mediterranean, with numerous armed militias vying for power. The ensuing instability displaced millions of people, with hundreds of thousands trying to flee the country in overcrowded boats to reach sanctuary in Europe. That flow, in turn, has exacerbated social and ideological tensions in the recipient countries.

Despite the calamitous outcome of their initial regime change war, the Western powers have never ceased trying to be the architects of a peaceful, democratic outcome in Libya. Responding to concerted lobbying by the United States and its European allies, the United Nations Security Council recognized the GNA as Libya’s government in December 2015, even though no expression of the domestic popular will had occurred. Former congressional aide Daniel McAdams later expressed scorn for that process and Washington’s supportive stance. He contended that it was a major stretch of logic for the United States and the other Western powers to bless the GNA as Libya’s legitimate government. McAdams observed acidly that it is “a governing body that was not selected by the Libyan people, but rather created by the United Nations and sent into Libya on a ship from Tunisia.” The GNA government was very much a creature of external power brokers, and McAdams skewered the hypocrisy at the root of U.S. policy. Noting that U.S. planes had begun to bomb ISIS and other targets in Libya, he contended that the United States was now “bombing Libya to consolidate the power of a non-elected government that the U.S. installed because the previous government [Qaddafi’s] was not elected.”

Haftar and his supporters based in the eastern city of Benghazi showed no inclination to recognize the GNA either. Multiple battles have taken place between GNA and LNA forces over the years, culminating in the latest LNA offensive to take control of Tripoli.

Even though Haftar’s conquest of Tripoli would likely bring the war to an end, the United States and its allies expressed opposition to his offensive. Western-dominated or Western-influenced institutions, including the UN Security Council, the G7, and the European Union, all passed resolutions demanding that the LNA cease its offensive. Western (especially European) governments have been pushing for a political settlement for years, with France taking the lead in that effort. French president Emmanuel Macron successfully induced Haftar and his opponents to sign a cease fire agreement in 2017 and an accord in 2018 setting the timetable for nationwide elections. Given that those elections were supposed to be held in December 2018, the effectiveness of such agreements may be open to some doubt.

One point is clear, though; both the United States and its allies were adamant about preventing Haftar from gaining power. In one sense, Washington’s hostility was puzzling. Haftar was once a valued Central Intelligence Agency asset who lived only a few miles from CIA headquarters in Langley, Virginia. The CIA even backed him in a failed coup against Qaddafi in 1988. Yet, when the 2011 revolution broke out, U.S. officials, for reasons that are not entirely clear, chose to support other Libyan players. Although Haftar has given indications that he has little respect for democratic norms, and may well intend to become Libya’s new dictator, such considerations have rarely inhibited U.S. leaders from embracing authoritarian figures in other countries.

The backing that Haftar is receiving from Egypt and Saudi Arabia likely does not trouble Western governments unduly, but allegations that he is receiving support from Russia (which Moscow denies) might be a different matter. Even the possibility that Vladimir Putin could be fishing in troubled North African political waters is enough to agitate U.S. and European officials, as well as alarmists in the broader foreign policy community.

Perhaps that is one reason that President Trump has now seemed to shift Washington’s stance. In a telephone call to Haftar, the president "recognized Field Marshal Haftar's significant role in fighting terrorism and securing Libya's oil resources, and the two discussed a shared vision for Libya's transition to a stable, democratic political system," the White House said in its official readout of the call. Although Trump did not endorse the military offensive, such a statement suggested a noticeable change in the administration’s previously hostile view toward Haftar. Adam Schiff, chairman of the House Intelligence Committee immediately denounced Trump’s action: “Trump has endorsed Gen. Hafter in Libya, an authoritarian attacking a United Nations backed government.”

It was unwise for the United States and its allies to seek to thwart Haftar’s possible victory in Libya. By the same token, it is an unwise move if the Trump administration is now contemplating switching sides and backing Haftar’s bid for power. The Western powers have made a thoroughgoing mess of Libya, beginning with their military intervention in 2011. Schiff and other compulsive meddlers should not perpetuate the Libyan civil war by insisting on an elusive political accord that brings to power a (probably imaginary) elected, democratic leader. Haftar may indeed prove to be another autocrat, but even that outcome is preferable to a continuation of the bloodletting and chaos. Both the United States and the European powers need to adopt a radically different approach—staying out of the power struggle entirely rather than backing either side in the latest stage of the conflict. Western meddling has caused enough suffering in Libya already.

Ted Galen Carpenter, a senior fellow in security studies at the Cato Institute and a contributing editor at the National Interest, is the author of twelve books and more than 800 articles on international affairs. His latest book is Gullible Superpower: U.S. Support for Bogus Foreign Democratic Movements (2019).