The West Is Falling for Putin’s Real Play in Ukraine 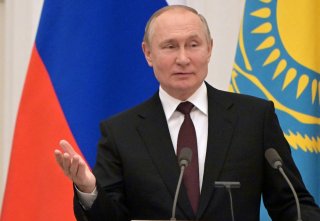 We’re missing Russia’s real play in Ukraine. It may not be a military strike but something else. A flurry of reports today indicated that airlines might halt international flights to Ukraine as early as tomorrow because insurance companies won’t extend coverage under current conditions. The result would be a de facto no-fly zone over the entire country.

Ukraine’s economy has already taken hit after hit. Foreign investors are heading for the hills as their citizens flee to the airport, following the advice of U.S. and other officials who have told everyone to leave. Ukraine’s currency is trading at record lows. Its ability to raise capital on international markets is nearing zero.

Consider the chronology. Russia masses troops and advances a series of maximalist political demands, demanding the recognition of a sphere of influence in Eastern Europe and a veto over Ukrainian sovereignty. Western countries reject this blackmail. At the same time, they issue stern warnings to their citizens, citing hair-raising intelligence about an impending attack. They add the caveat that President Vladimir Putin “has not made a final decision,” but that’s not the part people hear.

Anxiety grows in Ukraine. Concerned about the potential loss of life from a massive Russian military assault, U.S. officials go a step further. They speak openly about the kind of intelligence almost never shared publicly—possible false flag attacks, staged atrocities, thousands of possible deaths. The disclosures raise eyebrows. The New York Times admiringly observes that “after decades of getting schooled in information warfare by President Vladimir V. Putin of Russia, the United States is trying to beat the master at his own game.”

But Moscow is listening and watching, too. Even if Western officials are rationing the revelations carefully enough to protect sources and methods, the Kremlin knows that at least some of what it puts out over discreet channels now stands a good chance of reaching journalists, and the public, through a White House or State Department press briefing.

Jump from there to the mind of an actuary at a company that insures aircraft flying to Ukraine. These actuaries know nothing about Ukraine but see tanks everywhere.

Suddenly, Ukraine’s already cash-strapped government needs to pony up a few hundred million dollars or face the imposition of a no-fly zone. Not one Russian fighter had to take to the air for the threat calculus to change.

Russia’s stated demands are political. Moscow is trying to crater Ukraine’s economy and put President Volodymyr Zelenskyy under enough pressure to crack, or for his government to fall. The airline insurance debacle, which no one seems to have predicted, unfolded over the course of a few hours. With nerves on edge, and well-meaning Western officials releasing scary-sounding intel tidbits into the churn of social media, more moments like it are sure to follow.

This is the Russian play for now—to turn the over-riding concern over an invasion, and the megaphone of global communications into a weapon. The world’s attention is fixated on the seemingly endless images of Russian tanks, trucks, missiles, and helicopters streaming through the snow-covered countryside to converge on Ukraine. The world will soon move on if they don’t cross the border. Actuaries aren’t as menacing as artillery. But Ukrainians still have to buy groceries, pay the rent, send their kids to school, and do their best to live their lives. It will all be that much harder with their economy in freefall.

Economic crisis saps morale and rearranges politics, as we learned after the 2008 crisis. With guns aplenty aimed at Ukraine, a pipeline set up to publicize deadly speculation, and history’s greatest rumor-mongering machine installed on the phone in everyone’s pocket, Moscow is targeting Ukraine with more than just its military.

Forget mud and tanks. It’s time to talk about propaganda, panic, and pressure. Western governments should carefully calculate the second-order effects of information they publicly release with an eye to preventing panic. They should also take what measures they can to protect the Ukrainian economy. Finally, they should work with social media companies to tamp down the storms of misinformation and disinformation that are so easily kicked up in a crisis.