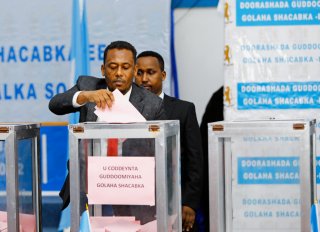 On Thursday, Somalia’s lower house elected former Minister of Commerce Adan Madobe as the new speaker. He won decisively with 64 percent of the vote from the 275 new members of the Lower House and was sworn in on April 14, 2022.

This comes after more than a year’s worth of attempts by the former President Mohamed Abdullahi Mohamed, also known as (Farmaajo), to delay the election process, including two failed coups. Though Madobe’s ascent to the presidency was a major milestone, it came at a high price as political violence displaced tens of thousands across various regions, most notably in the capital, Mogadishu. The lengthy process left outside partners such as the EU and the United States fatigue as they issued toothless sanctions and visa bans as punishment to Farmaajo. Now, after the swearing-in of the new parliament, Somalia is at a crossroads with the upcoming presidential election. The last mile of the election demands hands-on management from the United States and the EU to avoid the collapse of the Somali state.

The election’s postponement resulted from Farmaajo’s passage of universal suffrage, also known as One Person One Vote (1P1V). 1P1V had several flaws from the get-go. First, it begged the question of how to deal with Somaliland, as delegates are unable to visit Somaliland, let alone represent them in 1P1V. The next hurdle was how to register voters without a credible census count. Above all else, the issue of security was most prominent, with the government unable to secure voting sites. Farmaajo exploited these shortcomings and chose not to address security and voter registration. As the process wore on, U.S. and EU inaction emboldened Farmaajo to chip away further at democratic norms. He enlisted the current UN Somalia special representative James Swan and his ally, African Union special representative Ambassador Francisco Madeira to help do his bidding. Madeira was viewed as Farmaajo’s right-hand man, and he was instrumental in dismantling Somalia’s democratic and security institutions by expediting Somalia’s withdrawal from African Union Transition Mission (ATMIS) and creating a security vacuum.

On April 18 the terrorist group al-Shabab claimed responsibility for shelling Somalia's parliament while it was working to set a date for the election of both house speakers and their deputies. This latest attack came one day after a member of the Federal Electoral Commission (FEIT) was attacked by a landmine blast. Similarly, on April 27, Somalia's police commander and the director of the National Intelligence Agency were accused of attempted assassination along with preventing the newly elected members of parliament from accessing the election venue.

Along with widespread fears regarding physical safety, there is also concern about a peaceful transfer of power. Since Farmaajo came to power, he has eroded two crucial pillars in Somalia’s state-building: security and a broad political consensus. In order to protect against political violence and election tampering, the United States and the EU should impose severe sanctions on Farmaajo and his allies. For example, freezing Farmaajo’s assets (and the assets of his allies), revoking his EU and U.S. citizenship, and imposing visa restrictions are vital first steps. It goes without saying that it is crucial to have a secure environment where parliamentarians are able to vote without fear. To secure the election process, the United States and EU must help move election committees, presidential candidates, and parliament members to secure areas—such as Halane, where Somalia’s international partners are currently staying—until a new president is elected. The United States and EU can also assist Prime Minister Mohamed Hussein Roble by providing additional security measures, such as incorporating Somali, U.S., and British special forces into election security.

For Somalia, a post-civil war country where there is strong precedence of political violence and destruction, it is critical to secure the political process to ensure that Somalia avoids a repeat of past failures.

Guled Ahmed is a Non-Resident Scholar at the Middle East Institute.