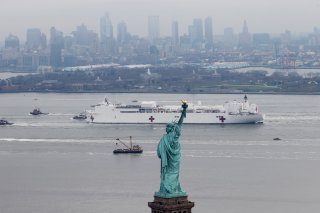 A slow-motion catastrophe is playing out in the Western Hemisphere. No, it’s not the coronavirus pandemic or the alarming collapse of Venezuela’s healthcare system, which will be overrun by coronavirus victims. It’s the world’s newest oil power, Guyana, and its still-disputed results from the country’s general elections in early March.

Controversial elections and now a growing concern about the coronavirus reaching its territory, demonstrate that oil is not the source of all happiness and tranquility. In these difficult times, the international community must find the bandwidth to monitor the political situation and play a constructive role in finding a solution.

While Guyana held its election on March 2, this election was several years in the making. President David Granger, who assumed office in 2015, lost a no-confidence vote at the end of 2018. After initially delaying elections, he eventually succumbed to international pressure to hold elections, demonstrating an enduring truth about Guyanese politics—the legitimacy conferred by the international community often trumps that of the Guyanese people.

After initial results showed Granger had won re-election, Irfaan Ali of the opposition People’s Progressive Party, questioned the legitimacy of the election results and a member of Granger’s own coalition requested a recount. Granger is alleged to have inflated his coalition’s numbers around Georgetown, the country’s capital and most populous area. To pre-empt Granger, the opposition posted what it believed to be preliminary results on social media.

Disagreements and verbal clashes with Georgetown ended in the Organization of American States, the Commonwealth of Nations, and other international elections observers leaving Guyana. However, a delegation from the Caribbean Community (CARICOM) stayed to complete its work—a fortunate fact, given its legitimacy in Granger’s eyes. Yet, an injunction against the recount and a looming travel ban related to the spread of COVID-19 have seen the CARICOM team leave without first finishing its business. President Granger, a supporter of CARICOM, stated on March 17 that he was “deeply disappointed that the CARICOM Initiative . . . had stalled.” There are plans for a recount in the near future, but it is still unclear whether it will take place under the auspices of CARICOM. Meanwhile, Guyana remains in limbo.

The danger, of course, is that Granger is now in a position to inaugurate himself under the pretense that Guyana needs a strong and decisive leader to confront the looming effects of the coronavirus. The Guyanese government has already passed some common-sense measures to combat the spread of the virus, including closing schools until April 20 while the University of Guyana will be closed through the month of March.

However, after CARICOM’s mission departed, Granger also issued a decree regarding the coronavirus permitting the use of police at the discretion of the minister of public health, establishing a public health cover to quell any protests. Worse, if Granger forges ahead and declares himself president while handing his public health minister a blank check, the world could prove too distracted to play a constructive role.

Layered on top of this complexity are Guyana’s newfangled oil wealth and its location in an increasingly volatile region. By 2024, oil could lift Guyana’s per capita income from $5,000 to $19,000 per year, nearly the same as Poland. The IMF expects the economy to grow by 85 percent this year. By 2030, the government’s share of earnings from oil could reach $10 billion in real terms, representing more than double Guyana’s current GDP.

There is another reason why the international community should pay more attention to this Caribbean country: Venezuela. The two governments continue their long-standing dispute at the International Court of Justice, which is a major source of tension. Also, Venezuelan refugees have streamed over the border (around forty thousand of them are now present in Guyana), and transnational organized crime groups have taken advantage of Guyana’s understaffed defense forces to smuggle everything from weapons to illegal gold.

Importantly, Venezuela makes claims to some of the waters in which Guyana made its oil discoveries. In December 2018, the Venezuelan Navy approached ExxonMobil’s survey team in an effort to intimidate them. It will be important to monitor how Caracas reacts to Guyana’s new status as an oil exporter.

In a hemisphere never bereft of significant events—including the recent announcement that the U.S. government will charge Venezuela’s de facto President, Nicolás Maduro, with drug-trafficking—it is easy to overlook countries such as Guyana. While the president lacks the bandwidth to focus on Georgetown, there are other institutions, such as the U.S. State Department’s Bureau of Western Hemisphere Affairs, that must maintain focus on a transparent recount of the March elections.

One encouraging sign that the international community has not forgotten Guyana is the British government’s recent statement, which warned that “Any government sworn in on the basis of non-credible results will face strong international condemnation. If the situation continues to deteriorate, this international response will include a range of serious consequences for those concerned.”

The recent re-election of OAS Secretary General Luis Almagro, who has placed democracy and human rights at the forefront of his agenda for the region, means that the OAS can work in conjunction with the State Department, the British government, the Commonwealth of Nations, and CARICOM to ensure President Granger allows transparency and democracy to prevail in Guyana.

The discovery of oil should be a game-changer for the people of Guyana, but only if the country continues the Caribbean community’s rich tradition of democracy and installs a transparent government to manage it.

Ryan Berg is a research fellow at the American Enterprise Institute (AEI), where his research includes Latin American foreign policy and security issues. Wilder Alejandro Sanchez is a researcher who focuses on geopolitical, military, and cybersecurity issues. Follow them on Twitter: @RyanBergPhD and @W_Alex_Sanchez.