Western Nations Are Repeating the Mistakes of 1914 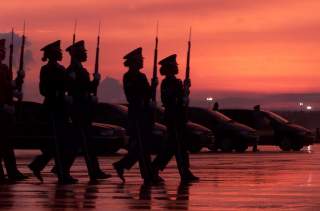 This year saw the centennial anniversary of the end of the World War I, in which some sixteen million Europeans died, two great European countries were destroyed, and other countries were crippled. This year may also be seen by future historians as the last year of the period between the cold wars, when after twenty-nine years of relative quiet, the world’s major powers once again moved into positions of deep and structural mutual hostility.

World War I also engendered the dreadful scourges of Communism and Nazism, and thereby led to World War II, which very nearly finished off European civilization. As a result of these catastrophes, almost all of the political and cultural elites that led their countries into war in 1914 were swept away, and in the Russian and Austrian cases, destroyed. Historians differ concerning the precise balance of causes and of blame for the disaster of 1914, but on one thing all are agreed: nothing that the great powers could conceivably have gained from going to war remotely compared to what they risked losing.

During World War I, the British and French, later joined by the Americans, portrayed the war as one of civilization against German barbarism. One hundred years later, one can certainly say that on balance the British and French systems were better than the German; but one must also admit that an Algerian subject of the French Empire or an African subject of the British Empire might have a different perspective—and also that the Russian Empire made a pretty odd member of a supposed alliance for democracy. As it turned out, the real barbaric threat to European civilization did not come from any of the European ruling establishments of 1914. It came from the hatreds and tensions generated within European societies by the social and economic changes of the previous decades, which the war then released. One of the reasons why the conservative elites of European countries before 1914 encouraged aggressive nationalism in their societies was because they thought that this would divert mass support away from socialism, and thereby preserve the old European order. They were most disastrously mistaken.

I fear that in their enthusiasm for a new cold war against China and Russia, the Western establishments of today are making a mistake comparable to that of their forebears of 1914. I fear that the historians of the future will judge us by a similarly harsh standard. This is not primarily because of the threat of world war, but because this new cold war is serving—and in certain quarters is deliberately intended to serve—as a distraction from vastly graver threats that will eventually overwhelm us if they are not addressed. Existing Western political elites (on both sides of the political divide) are desperately unwilling to address these threats because that would require radical changes to their existing ideological positions. In their obsession with their own righteousness and civilizational superiority, the Western elites are also falling into the moral trap warned of by Hans Morgenthau (a cold warrior who opposed Soviet aggression, but also a German Jew deeply acquainted with the civilizational fantasies that had helped bring on the disaster of 1914-18):

“Political realism refuses to identify the moral aspirations of a particular nation with the moral laws that govern the universe . . . the light-hearted equation between a particular nationalism and the counsels of Providence is morally indefensible, for it is the very sin of pride against which the Greek tragedians and the Biblical prophets warned rulers and ruled. The equation is also politically pernicious, for it is liable to engender the distortion in judgement which, in the blindness of crusading frenzy, destroys nations and civilizations.”

The historians of the future may also note the multiple ironies involved in the idea of the United States leading a new “league of democracies” against an “authoritarian alliance.” In Asia, of course, this anti-Chinese alliance would include as key members Vietnamese communists, murderous Filipino authoritarian populists, and above all Indian Hindu neo-fascists. Even in Europe, the most bitterly anti-Russian regime, Poland, is ideologically similar to Russia. In the United States, we may devoutly pray that in 2020 Donald Trump will be defeated and replaced by a more convincing leader of the “free world.” Additionally, all the evidence now suggests that in 2022 France will elect a president from the National Front.

Even if they do not lead to catastrophic war, diverting domestic discontent into external hostility very rarely works because the factors that created the discontent remain unchanged. Does anyone who has interviewed the “Yellow Vests” in France seriously think that their actions have been triggered by Moscow manipulation? Does anyone who has seriously studied the crisis of the white working classes in the United States (Robert Putnam or Thomas Frank, for example) write that the reason that they have voted for Trump is because they have been swayed by Russian propaganda? The people who claim this would do better to address a much more important link between developments in Russia and the United States, and a far more important contribution to the rise of Putin and Trump: the rising death rate among working class males in Russia in the 1990s and the United States in recent years. This death rate has increased for the same reasons: diseases and addictions fueled by economic, social and cultural insecurity, and despair. In Central America, a far more terrible version of these pathologies is driving millions of people to seek to move to the United States, driving in turn the radicalization of parts of the U.S. population; yet total U.S. aid to Mexico in 2017 was less than that to Ukraine or Egypt, and a fraction of that to Afghanistan. Does any truly responsible national establishment neglect its own neighborhood in this way?

Looming behind these problems is the even graver danger of climate change, which threatens to damage the United States and the West incomparably greater than anything that the Chinese or Russian governments could or would wish to inflict on the region. In a tragicomic irony, amidst the hysteria over a minor clash between Russia and Ukraine in the Sea of Azov, and barely noticed by most of the U.S. media, there was one example of close U.S.-Russian cooperation: the United States and Russian governments combined to block adoption of the latest UN report on climate change.

This is not to say that there are not real threats from Russia and China, and real areas (notably trade) where the United States needs to push back. But these are all limited issues that are either negotiable or containable. None of them justifies trying once again to restructure the national strategies and institutions of the United States and Europe around the principle of a cold war. If Nikita Khrushchev had not transferred Crimea from the Russian Soviet Republic to the Ukrainian Soviet Republic in 1956, then everyone would recognize the Sea of Azov as Russian, and the issue would not even exist. In the South China Sea, the United States is pushing back against China in the name of an international Law of the Sea—which even the United States does not recognize. If the Chinese were ever so mad as to use their position in the South China Sea against U.S. trade, then the U.S. Navy could block Chinese trade to the whole of the rest of the world. And so it goes.

There were of course deep factors pushing the European states to war in 1914. The one that actually led to war, however, was Serbian nationalist claims to Austrian-ruled Bosnia, leading to the assassination of the Archduke Franz Ferdinand in Sarajevo. It seems highly probable that not one in a hundred of the British soldiers who died in World War I had previously ever heard of Serbia’s claims, or of Sarajevo. In the name of God, let us not make this mistake again.