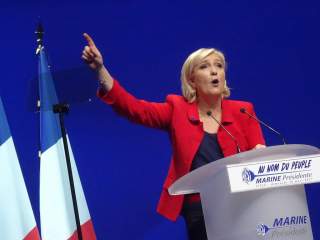 The pundits and the pollsters might have pronounced Marine Le Pen dead, but I never did. I was feeling too tentative after the shocks of Brexit and Donald Trump, and as round two of France’s presidential election began a couple of weeks ago, events suddenly seemed to justify my caution. Le Pen’s opponent, European Union action figure Emmanuel Macron, visited a Whirlpool dryer plant only to be booed, and then had to watch as Le Pen showed up unexpectedly and mugged for selfies with admiring workers. It was precisely the contrast she wanted to strike—the awkward Davos suit versus the tricolor-cockaded woman of the people—and for a brief moment observers wondered whether another Trump-like figure was about to arrive.

Then came the televised debate last Wednesday. Le Pen melted down. She was too sneering, too unsubstantial, too contemptuous of Macron for France’s relatively pacific public square. The taste she left in the French mouth was even more acidic than they’d expected, and it lingered into the voting booth on Sunday, guaranteeing that the result would be a trouncing. In the end, Macron won 66 percent of the vote, rallying behind him every part of France except the deindustrialized northeast, where Le Pen marshaled her most fervent supporters amidst the carapaces of that region’s once-proud blast furnaces. Given the choice between a shiny new drill and a wrecking ball, the French selected the former. They might be beleaguered by terrorist attacks and skeptical of further immigration, but they just weren’t prepared to elect the daughter of Jean-Marie Le Pen just yet.

Macron’s most alluring electoral draw was that he wasn’t his opponent—43 percent of his voters named anti–Le Pen sentiment as their strongest reason for supporting him. Had the hated woman in question been named Hillary and not Marine, the diagnoses of nationwide sexism would have already been issued. Surely, though, Le Pen was failed by men. Macron declined to self-destruct with an expenses scandal or a deplorables-caliber gaffe like she needed him to. François Fillon, the standard-bearer for the center-right Republican party who was eliminated after the first round, refused to hand over his conservative voter base—he endorsed Macron. The eliminated far-left candidate Jean-Luc Mélenchon at first looked like he might lapse from communism into Souvarine-style anarchism after he declined to back Macron, raising fears that his voters might decide to abstain and watch the left burn. Yet in the end they mostly sprung for the pampered banker.

That was how Le Pen might have won: diminish Macron while uniting the French right with reluctant far-left votes or at least abstentions, a shaky joining of the political termini in revolt against the establishment. It didn’t work. Macron’s “centrism” (I hate that word—centrists are just as ideological as the rest of us) now has its mandate, yet it was the poles of the spectrum that were clearly on his mind as he recited his victory speech in front of the Louvre. “I know the divisions in our society led to some extreme votes,” he said. “I respect them.” Maybe he does, but can this wunderkind really mend French civic life and stop its politics from swinging around the edges? He comes to office during a time of crisis freighted with the divergent expectations of millions of voters, circumstances that, as Barack Obama can attest, tend to backfire on you rather quickly.

The similarities between our forty-fourth president and Macron are so glaring that the former even endorsed the latter, but Macron also brings to mind Tony Blair. Both are neoliberal institutionalists chirpily speaking the language of modernity; both seemed initially to have emerged out of a mist and garnered people’s attention precisely because they were so little known. It’s a more flattering comparison than it sounds: Blair, after all, won three general elections and transformed his country. But Blair also had a fearsome parliamentary majority behind him, one so loyal he was able to march it into George W. Bush’s Iraq War. Macron will enjoy no such advantage. His political party, En Marche!, is just over a year old and still largely a cult of personality centered around him. It’s likely to win seats in the National Assembly next month, if only because the detested Socialists will be vacating them, after which it will be forced to deliver on a mandate for great change with a governing corps consisting largely of novices.

Macron is determined to liberalize France’s fossilized economy, and he may find success if he’s able to collaborate with Republicans in the legislature. But more likely is a period of confusion and slip-ups as two new parties—Le Pen’s National Front will win seats, too—check in with unsettled agendas. A disoriented government isn’t going to produce the vast societal rectifications that the restive French are craving, which will mean more electoral uncertainty, perhaps even another presidential run for Le Pen. European leaders didn’t seriously think populism died on Sunday, did they? Le Pen made it to the top two and raked in twice as many votes as her father mustered back in 2002. Geert Wilders commands the second-largest party in the Dutch parliament. Great Britain is exiting the European Union. The Visegrád Four are increasingly EU averse. Donald Trump is president of the United States. That’s a remarkable scorecard of political change in only two years’ time.

The same Eurocrats who swore nationalism would never be competitive are now pronouncing nationalism dead because it failed to conquer France in a single swoop. In its place they’ve presented Macron, a political savior oozing hope who promises to heal our wounds and cleanse our divisions. It’s worth noting that the American version of that movie didn’t end so well.