Wexit: George F. Will Votes Leave on the GOP 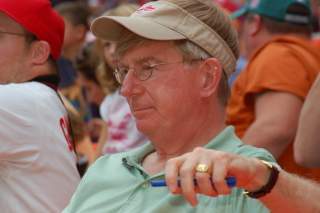 When people think “syndicated columnist,” they might well think of George F. Will. The Pulitzer prize-winner has written for over 450 newspapers around the world and his biweekly column in the Washington Post is a go-to read for principled conservatives of the William F. Buckley, Jr. mold who argue that the entire industry has been hijacked by liberal elites. Will is also a big presence on cable news; before signing a contract with Fox News Sunday as a weekly talking head, he was a regular on ABC’s This Week, where he consistently espoused the conservative viewpoint.

So when Will spoke to the Federalist Society last week and divulged that he was no longer registered as a Republican in the state of Maryland, much of the political world raised its eyebrows. The reason for his abandonment of the GOP: Donald Trump, a man Will has railed against for the better part of a year. Trump, Will wrote, is a “impetuous, vicious, ignorant, and anti-constitutional man.”

Will expounded on his very personal Wexit from the Republican Party to Chris Wallace of Fox News this past Sunday:

After Trump went after the Mexican judge from northern Indiana, then Paul Ryan endorsed him. And I decided that, in fact, this is not my party anymore. I changed my registration to unaffiliated 23 days ago. I hardly made an announcement. I just mentioned this in a meeting with the Federalist Society. So the long and the short of it is, as Ronald Reagan said when he changed his registration, I did not leave the Democratic Party, the Democratic Party left me.

The question now is simple: outside of the National Review, does anyone in America really care? Or as Sam Tanenhaus, the former editor of the New York Times Book Review, put it in a tweet, “a journalist's quitting a party is news? Isn't this the root of the problem Trump has exposed?”

If Will’s announcement was meant for public exposure or self-promotion, then he succeeded with flying colors. But if by moving out of the Republican Party Will hopes to bring more bleeding-heart conservatives along with him, then his strategy will fail just as every other anti-Trump strategy has collapsed in a pile of dust over the past twelve months.

The simple fact of the matter is that the same Republican voters who enthusiastically supported Ronald Reagan, George H.W. Bush, and George W. Bush no longer seem interested in the conservative intellectual arguments of the likes of George Will, Andrew McCarthy and Jonah Goldberg. After several decades, the same arguments start to get stale and moldy.

After the news of Will’s resignation as a Republican broke, I asked a friend—an undecided voter leaning towards Trump—what he thought. The answer I got was instructive: “Who’s George Will?”

And therein lies the point: if a columnist as big in conservative circles as George Will doesn’t get the attention of average Americans who are sick and tired of abstract arguments about lower taxes, then it’s tough to see any mandarin on the right changing the conversation. For Republicans and Republican-leaning independents, this election isn’t about listening to the theories of a George F. Will. Instead, it’s about rebelling against Washington elites.

Who represents that better than Will?

Image: George Will at a baseball game. Photo by Scott Ableman, CC BY-NC-ND 2.0.