What the Allegations Against Chairman Milley Really Mean 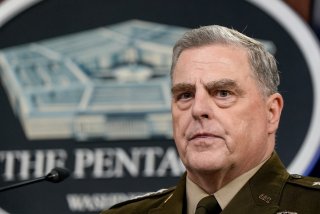 A senior Senator has called on the Chairman of the Joint Chiefs of Staff to resign or be fired on the basis of undocumented claims from unnamed sources. Since Chairman Mark Milley is certain to be asked about his meeting on January 8 with senior officers from the National Military Command Center when he testifies before the Senate Armed Services Committee Tuesday—and because Senator Marco Rubio’s allegations of Milley having interfered with the chain of command in a way that could have increased the risk of nuclear war display such elementary ignorance of the basics of the command, control, and conduct of the U.S. military in preparing for, preventing, and executing military attacks—a brief summary of the basics may be in order.

First, as Commander in Chief, the President has the sole authority to order American military officers to conduct lethal strikes, including nuclear strikes. His order goes to the Secretary of Defense and from him to the military commander responsible for their military subordinates and weapons that conduct the attack. As the presidentially-selected, congressionally-confirmed leader of all American military forces, the Chairman of the Joint Chiefs of Staff has responsibility for assuring that the 1.4 million uniformed service members who operate everything from missile silos to nuclear-armed submarines are able and ready at every moment of every day and under all conceivable conditions, including when under attack, to execute presidential commands.

In order to allow the Commander in Chief to have a robust menu of feasible nuclear options to deter adversaries from attack or coercion, and to ensure that his specific order is executed, successive Presidents and Congresses have passed laws directing successive civilian Secretaries of Defense and military Chairmen of the Joint Chiefs of Staff to build, maintain, and exercise a nuclear system that will under all conditions give the President feasible nuclear options. For seven decades, the system has worked. “Zero error” is a standard that is almost impossible for any complex system consisting of thousands of mechanical systems and tens of thousands of individual human beings, so the fact that there has been not one accidental or unauthorized explosion of a nuclear weapon for the past seven decades is an achievement for which we should pause and give thanks to generations of civilian and military leaders who have built and maintained this system—including successive Chairmen of the Joint Chiefs of Staff.

The foundational legislation that establishes the current command structure—the Goldwater-Nichols Act of 1986—designates the Chairman as the “principal military adviser” to the President and the Secretary of Defense. This responsibility is reflected in the established process of consultation that informs the President when he is considering a possible use of nuclear weapons. In this capacity, the Chairman has primary responsibility for helping the President and the Secretary of Defense assess the menu of military options and the likely consequences of each, including the enemy’s response and thus the options the President will have to consider at that point. This helps prevent what could otherwise be playing chess one move at a time. This role is recognized in the established, presidentially approved process for considering conventional as well as nuclear strikes, in which the Chairman is included at every level of deliberation.

Regular reviews of each of the “combatant commands” that have to stand ready to carry out Presidential orders are an essential part of the Chairman’s job description. The Goldwater-Nichols Act explicitly assigns the Chairman responsibility for “the preparation and review of contingency plans which conform to policy guidance from the President and the Secretary of Defense… preparing joint logistic and mobility plans to support those contingency plans and recommending the assignment of logistic and mobility responsibilities to the armed forces… establishing and maintaining, after consultation with the commanders of the unified and specified combatant commands, a uniform system of evaluating the preparedness of each such command to carry out missions assigned to the command.”

Thus, for example, in January 2020, when President Donald Trump was considering a surgical military strike to kill Iranian Quds Force Commander Qasem Soleimani, one can be sure that Chairman Milley provided his best military advice on potential responses and the options President Trump would have to consider for America’s next move—and that he convened the relevant senior military leaders to “review the process” to ensure that the command and control system was ready and able to execute a presidential order to attack.

Subsequent laws, including annual authorizations and appropriations for the Defense Department, directives from successive Presidents, and directives from successive Secretaries of Defense, have assigned responsibilities for creating, maintaining, exercising, and operating a nuclear weapons system that includes thousands of nuclear warheads and tens of thousands of uniformed individuals who prepare in order to ensure that the United States has at every moment of every day a robust and secure nuclear deterrent and that the President has executable nuclear options if he ever concludes that it is necessary to order a nuclear strike.

In sum: if the allegations made by Senator Rubio about Chairman Milley having convened on January 8 a review of command and control arrangements, including those for nuclear strikes, are correct, Chairman Milley would have been responsibly doing his job. The chorus line Milley is alleged to have sung at the January 8 review is: “do the process.” That is military-speak for reminding everyone in the chain of command and execution between the President and the use of military force that however tumultuous things may seem and whatever their personal feelings and views as citizens may be, they have taken an oath to follow orders in upholding the Constitution and defending the nation as non-political, non-partisan servicemen.