What America Can Do to Stop the Practice of Child Soldiers 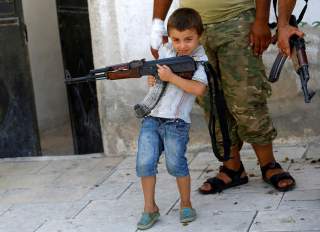 In February, President Donald Trump identified human trafficking as a key issue of concern for U.S. domestic and foreign policies, and stated that his administration would make it a priority to stop the epidemic. Yet on September 30, President Trump waived nearly all sanctions that would prevent certain countries that use child soldiers from receiving U.S. military assistance and weapons. Such a move diminishes the impact that U.S. policy tools can have on combating a particularly heinous form of human trafficking—the recruitment and use of children in armed conflict.

In a major opportunity to use powerful leverage to encourage foreign governments to stop the horrific practice of recruiting and using child soldiers, the Trump administration again proved unwilling to take this commitment seriously. The Child Soldiers Prevention Act of 2008 (CSPA) aims to encourage foreign governments to stop recruiting and using children in armed conflict by leveraging traditionally coveted U.S. arms transfers and military assistance. Specifically, the law requires the secretary of state to identify countries that recruit and use child soldiers, and prohibits these countries from receiving seven categories of military assistance that fall under both Departments of State and Defense accounts, to include: direct commercial sales, excess defense articles, foreign military financing, foreign military sales, international military and education training assistance, peacekeeping operations assistance (PKO) and Section 1206 assistance.

In 2017, the State Department identified eight countries that recruit and use children in their national militaries or government-supported armed groups: The Democratic Republic of Congo (DRC), Mali, Nigeria, Somalia, South Sudan, Sudan, Syria and Yemen. The president, however, can choose to waive the CSPA’s prohibitions—in part or in full—and allow these identified countries to continue to receive U.S. weapons and military assistance. The 2017 list itself was controversial and marked the Trump administration’s first missed opportunity to seriously address the issue of child soldiers, as the list omits Afghanistan, Iraq and Myanmar—three countries with notorious and perpetual use of child soldiers.

The Trump administration’s second strike on child soldiers is evident in the issuing of the national security waivers. In a presidential memorandum, Trump waived CSPA prohibitions for five of the eight countries identified on the State Department’s child soldiers list. In so doing, Trump effectively gave a pass to governments that routinely exploit children in their national militaries or government-supported armed groups.

Although Sudan, Syria and Yemen did not receive waivers, they are currently not slated to receive any sanctionable assistance from the United States in FY18.

Rachel Stohl is Director and Shannon Dick is Research Associate with the Conventional Defense Program at the Stimson Center.