What America Can Learn from Taiwan’s Digital Democracy 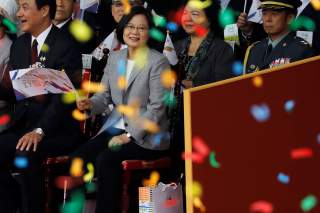 As Americans went to the polls for the midterm elections, newspapers reported cybersecurity concerns over voting systems and the constant hacker attacks spreading disinformation on digital sources of information on candidates and policy issues. The ongoing threat to the integrity of U.S. elections—and Americans’ faith in the process—is real, but digital tools of democracy are here to stay. Yet the peril is not intrinsic to the use of technology for democratic processes: it can be mitigated by the vigilance, diligence, and drive of the people and the government to protect their democracy. For example, American can look to Taiwan’s efforts to strengthen and innovate its digital democracy.

It might seem an interesting twist for one of the world’s oldest democracies to look at one of the newest as a role model (Taiwan transitioned to democracy in 1987). Taiwan’s citizens highly value their democracy, which exists in the shadow of mainland China’s claim to the island. More than 70 percent of Taiwanese view democracy as the best political system, according to a survey conducted in 2018 by National Chengchi University’s Elections Study Center on behalf of the Taiwan Foundation for Democracy. The same survey shows a high dissatisfaction with Taiwan’s democracy at present, indicating that the Taiwanese have strong expectations of their government and are not complacent. It is not a surprise that Taiwanese are using their love of democracy and their desire to improve it to innovate within their political system.

For instance, there was the Sunflower Movement in 2014, in which student protesters occupied the Legislative Yuan over dissatisfaction with the lack of transparency over deliberations on a cross-Strait trade agreement. That movement highlighted the importance of technology that helps citizens participate in their political system. The protestors used social media to disseminate concisely worded updates and press releases on their occupation. After the movement, a group of programmers called g0v (or gov dot zero), interested in tools to improve civic participation, was invited by the Executive Yuan to create the vTaiwan public platform for discussing domestic policy issues.

vTaiwan has become part of Taiwan’s broader efforts to create a digital democracy that encourages participating and transparency in governance. Citizens can use vTaiwan, which is publicly-funded and open-source, to submit opinions on policy issues in a collaborative process designed to generate a final consensus for the government to consider for legislation. Shepherding the process as facilitators are the digital minister, Audrey Tang, and the Public Digital Innovation Space (PDIS) team. vTaiwan has been used with success on some digital economy issues, such as ridesharing regulations. There are some obstacles to broad implementation, such as low participation by older citizens on the platform. But if the PDIS can expand access and usage, likely aided by the government’s digital infrastructure policy, vTaiwan and similar tools might make some aspects of governance more responsive and more accountable to citizens.

As for cybersecurity, a more formidable and likely an ongoing, evolving problem, PDIS is tackling the task of protecting digital political processes. Citing the need to secure the technology to ensure faith in the process, PDIS has ethical hackers test the platform for vulnerabilities before projects like vTaiwan are launched. Even so, Taiwanese use electronic voting machines and prepare for elections by learning about issues on social media—democratic tools which are subject to the same threats as in the United States. Looking ahead to Taiwan’s midterm elections on November 24, the government proactively appointed a task force in April to prepare for Chinese cyber-attacks, including social media propaganda campaigns and hacking. The preparation and vigilance will help Taiwanese citizens, and the government identify potential cyber manipulation and guard against it.

As more parts of the democratic process become digital, from gathering information on issues, policies, and candidates, to casting votes, to participating in policy-making itself, a culture of innovation and protectiveness will serve to secure Taiwan’s democracy from external and internal threats alike. Before the 2020 elections, Americans should consider Taiwan’s example, not only to ensure the integrity of the democratic process but to preserve the people’s faith in it. The U.S. government, across local, state, and federal levels, should ensure that all electoral processes are secure against interference—whether domestic or foreign—and keep verifiable paper trails for every electronic voting machine. Civil society organizations and schools should also help citizens to recognize propaganda in social media, online, and in the news, since the U.S. government itself is not immune to spreading false information. Finally, Silicon Valley and the U.S. government should consider the applicability of collaborative platforms like vTaiwan for increasing the average citizen’s participation in policymaking, especially at local levels, beyond just voting. The Taiwanese have demonstrated that a democracy under assail can strengthen itself with engaged, creative citizens. Americans must learn this lesson and demand the best of digital democracy.