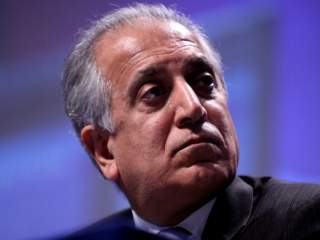 Dr. Zalmay Khalilzad, former U.S. ambassador to the United Nations, Iraq and Afghanistan, will speak at the Center for the National Interest in Washington, DC, on April 12, 2016. That talk is a part of the rollout of his new book, The Envoy: From Kabul to the White House, My Journey Through a Turbulent World. Khalilzad spoke at the Center for Strategic and International Studies (CSIS) on March 31 in an event moderated by CBS Anchor Bob Schieffer, and an event was held for Khalilzad at the National Endowment for Democracy (NED), with President Carl Gershman as moderator. These occasions are a testimony to the quality of the book, the respect Khalilzad commands from his colleagues, and the relevance of The Envoy for the future of American foreign policy in hot spots like Afghanistan and Iraq.

Khalilzad has had a remarkable career in public service—all the more so after having grown up in northwestern Afghanistan. In addition to three ambassadorial posts, he has also served in senior positions in the State Department and the Defense Department. Earlier, he taught at Columbia University after earning a Ph.D. from the University of Chicago. His new book combines autobiography with sophisticated insights into some of America’s greatest foreign policy challenges in recent decades.

Theory and The Envoy

Regarding erudite insights, the book makes a contribution to the academic and policy literature on bureaucratic politics; consider, for example, the piece by Graham T. Allison and Morton H. Halperin, “Bureaucratic Politics: A Paradigm and Some Policy Implications.”

In a transition from ambassador to Afghanistan to become envoy to Iraq, Khalilzad recounts that he had been tasked with convening conferences across Iraq to identify leaders who would be able to work with exile groups to form an interim government. “Sovereignty was to be transferred to this new administration as soon as possible. But the process had been suddenly abandoned when President Bush announced that Paul Bremer would be going to Baghdad instead, to head the Coalition Provisional Authority, which would serve as the U.S. occupation government in post-Saddam Iraq.”

A few hours after the announcement, Bush called Khalilzad, stating, “We all love you, Zal. We think the world of you.” Khalilzad politely replied how he appreciated the compliment but did not understand why the administration was shifting plans, from one to devolve power as quickly as possible to the Iraqis, to one that would amount to being an occupying force like the one that had ruled Japan after World War II.

According to the president, as told by Khalilzad, the problem was that if both Bremer and Khalilzad went to Baghdad, Bremer would be reporting through the Department of Defense to Donald Rumsfeld, and Khalilzad would be reporting through National Security Council Advisor Condoleezza Rice. Because Rumsfeld and Rice were not working well together, one could not have two senior officials in the field responding to principals in Washington who were at odds with each other. The president needed the Department of Defense to be in the lead, and that meant Bremer.

The bitter irony is that Rumsfeld describes serious problems in Bremer’s reporting among the White House, State and Defense during the time Khalilzad discussed his disappointment with the president’s decision. So despite the president’s wish to resolve a problem before it arose, his solution did not have the desired effect.

What is interesting is how Bush ripped a page from the playbook of academics. But just because they wrote in journals does not mean they were “only” scholars. Indeed, they also often served in high-level positions. This “inner-and-outer” aspect of American policymakers gives rise to a richness of theorizing. One of the oft-cited and frequently discredited principles in the bureaucratic literature is that “where you stand depends on where you sit.”

Brent Durbin states, “Perhaps the most-abiding concept from the bureaucratic politics model, and the shorthand many have used to define it, is that actors will pursue policies that benefit the organizations they represent rather than national or collective interests. This idea, that ‘where you stand depends on where you sit,’ is often called Miles’s law after the Truman-era bureaucrat who coined the phrase.” Bureaucratic politics often serves as a counterweight to realist theories about decisionmaking.

History and The Envoy

With respect to the realist school of thought, it is noteworthy that the Center for the National Interest is celebrating Khalilzad’s book. It seeks “original ideas and analyses on topics of international politics. . . particularly from a realist perspective or addressing realist concerns.” A book rollout at the Center, however, does not imply that the author or The Envoy fits the realist school of thought. Indeed, Khalilzad is hard to pigeonhole into any such place.

Hark back to the heyday of realism at the University of Chicago, where Professor Hans Morgenthau taught from 1943 to 1971. I learned a great deal from him in several meetings while at Northwestern University as an assistant professor in 1964. He epitomized the classical realist approach to international relations and use of traditional methods of diplomacy, including compromise because of limits on national power.

Morgenthau wrote a book entitled In Defense of the National Interest. He viewed American policy from the “Realpolitik” point of view and was critical of the utopian bent of American thinking on foreign affairs, such as the Wilsonian approach. Consequently, the Cold War balance of power meant that the United States lacked a preponderance of power to coerce the Soviets. Hot war and a negotiated settlement were the only alternatives, and Morgenthau preferred negotiations to war.

In a 2001 Foreign Affairs review of a biography of Morgenthau by Christopher Frei, Stanley Hoffmann wrote:

“Frei shows how Morgenthau developed his philosophy in the 1920s and 1930s under the influence of Friedrich Nietzsche and other German thinkers. His resulting pessimism and realism about the human appetite for power and evil led to a profound culture shock when he arrived in the United States, with its ‘naive’ political liberalism and optimistic faith in science.”

Hoffmann concluded that for Morgenthau, “the reconciliation between realism without illusion and idealism aimed at the preservation of life and freedom was the task of statecraft,” suggesting that Morgenthau, like Khalilzad, could not be placed easily into one camp or another.

Finally, and more recently, consider Barry Gewen, an editor at the New York Times Book Review, who wrote “Hans Morgenthau and Hannah Arendt: An Intellectual Passion” in the National Interest. Gewen imagined Morgenthau with a younger Henry Kissinger, who considered Morgenthau his mentor, as a dinner guest. The two converse animatedly about the events of the day: “Together, they were campaigners for a hard and grim reality against overweening American optimism.”

A book written by two scholars from CFTNI, Geoffrey Kemp and John Allen Gay, considers the prospects of war with Iran from a realist outlook. They provide a critique of President George H. W. Bush’s decisionmaking: despite its “tendency toward realism,” that Bush administration displayed an error in the closing days of Operation Desert Storm, which eventually resulted in the takedown of Saddam Hussein.

“Policymakers wanted to extract concessions that would ensure Iraq would not again threaten the peace, yet seemed to view regime change as the only further option, and one they did not wish to exercise given the risks of occupation. The wish for regime change led the administration to encourage rebellions in Iraq, yet it did not support them because of the costs, resulting in massacres and serious embarrassment, and further trouble with Iraq until the 2003 war. Other options for getting key concessions, such as further land attacks with goals short of regime change, do not seem to have been seriously considered.”

In view of the theoretical and historical settings, The Envoy contains additional policy insights from for the future of American foreign policy. Recall Bush’s decision that he needed the Department of Defense to be in the lead, and that meant Bremer to be head of the Coalition Provisional Authority, which would serve as the U.S. occupation government in post-Saddam Iraq. Khalilzad laments the Bush choice and states that:

“Looking back, my greatest regret is that I was unable to reverse the decision. It was inevitable that an American-led occupation, however benign its intentions, would lead to armed opposition. Arab nationalism, bitter memories of European imperialism, ethnic and sectarian enmities, and the vast weaponry and materiel from Saddam’s armories were a precarious combination. And it was not long before the country was ablaze.”

My own view is that Khalilzad takes too much blame for the failed policy, which was more a result of process gone amok than failures of individual policymakers. His mentor at the University of Chicago was Albert Wohlstetter, who “held to the maxim that you should identify and question your assumptions because it’s not what you don’t know that kills you but, rather, the things that you’re sure you know but that turn out to be wrong.”