What America Needs in Its Next UN Ambassador 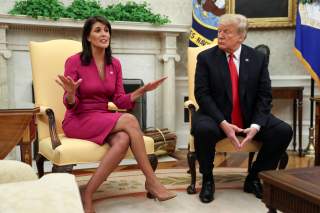 With the sudden resignation of Nikki Haley as the U.S. ambassador to the United Nations, President Donald Trump must now nominate—and push through confirmation—a replacement for one of his more popular advisors. Given the intensely partisan situation in Washington and consequential midterm elections only weeks away, this will be no small task; especially as many Republican foreign-policy operators publicly opposed Trump as a presidential candidate.

The ambassadorship to the United Nations is unlike any other in the U.S. government. It is a cabinet-level position that gives the ambassador more access to the president and his national-security team and heavier influence on policymaking.

Whereas many ambassador roles are given to career foreign-service officers or supporters of a presidential campaign, the UN ambassadorship is often filled by more politically-inclined individuals who closely oversee the president’s international agenda. The position is often seen as a stepping-stone to higher offices in the government, with former ambassadors including George H. W. Bush, Madeline Albright and Susan Rice.

Ambassador Haley brought with her significant political acumen and executive experience as a former governor, but she lacked traditional foreign-policy experience. She is believed to have higher political aspirations as well. Her tenure at UN headquarters, therefore, focused on the standard Republican platform positions: toughness on Iran, countering Middle Eastern and European initiatives against Israel, trying to rally allies against terrorism and human-rights abuses, and pushing for operational and budgetary reform in the organization.

While this may have been satisfactory for a traditional Republican presidency, President Trump’s time in office has been far from traditional by any measure.

Ambassador Haley at times seemed to be operating independently of the president and was on occasions ignominiously contradicted by the White House. While she was praised for some of her actions and was a strong defender of President Trump, it never seemed to be a comfortable match.

Given that the Trump administration is not a traditional presidency, the next U.S. ambassador to the UN should not be a conventional appointment. This not only would make sense for Trump’s “drain the swamp” brand of leadership, but it could be hugely beneficial for the United States—and the UN—by bringing outside-the-box thinking and initiative to the international bureaucracy.

The new ambassador will likely be nominally of the Republican-conservative persuasion, but Trump should nominate someone who is not beholden to the Beltway’s policymakers.

One of the defining characteristics of the Trump campaign was Trump’s rejection of both the neoconservatism of George W. Bush and the internationalism of Hillary Clinton, and it won him votes in the primary and general elections. These brands still dominate in the foreign-policy ranks of both parties, despite glaring failures over the past two decades and unpopularity with voters. A nominee who does not see the job primarily as a resume-builder for their political future will be less susceptible to the establishment-driven pressures to conform.

The UN has always been a highly idealistic organization made up of like-minded internationalists who allow their idealism to blind them to human realities like corruption, greed and violence. This culture influences U.S. policymakers, especially those who work for the State Department, and it can entangle Americans in affairs that are not within U.S. national interests. In 2011, the Obama administration used UN Resolution 1973 as a pretext for military action against Muammar el-Qaddafi’s forces in Libya, without identifying U.S. national-security interests or articulating America’s goals. In the end, Americans had few interests there, and the results of U.S. intervention were disastrous for the region.

America’s new ambassador needs to bring a dose of realism to the United Nations and safeguard U.S. sovereignty by using the organization to pursue American foreign-policy objectives as a part of a broader national-security strategy. For the U.S. government, the UN should be another tool for protecting the rights and interests of American citizens. The interests of the collective international body should never be seen as superseding those of the United States, and the American mission must act as the representation of Americans to the UN, not as a liaison between UN headquarters and Washington.

The raison d’etre for creating the UN following World War II was to have a forum for nations to bring concerns and openly communicate in an attempt to prevent future violence. This is still a viable goal in the twenty-first century, but for the United States, it must be within the context of America’s interests and what its leaders believe that they can achieve. Thus, President Trump must nominate an ambassador who has as much experience and passion for America’s governing principles as they do with international affairs—someone who will use America’s membership in the UN to advance the nation’s economic and security goals.

Robert Moore is a public policy advisor at Defense Priorities. Having spent nearly a decade working defense and foreign policy issues on Capitol Hill, Robert has extensive knowledge of, and experience with, the policymaking process, including how Congress shapes U.S. national security. He most recently served as the lead staffer for Sen. Mike Lee on the Senate Armed Services Committee. He also advised Lee on matters of foreign relations, intelligence, homeland security, and veterans affairs. He previously worked as part of Sen. Jim DeMint’s national-security team.