What are the Philippines and Malaysia Doing When It Comes to China? (It's Called Bandwagoning) 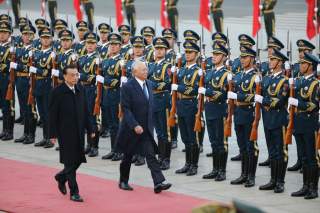 International relations experts have noted that neighboring states typically engage in balancing behavior against a would-be regional hegemonic power. That response would seem to be instinctively logical. Any power that attempts to dominate a region is likely to appear threatening to neighboring states. Their natural response is to try to counter the strength of that emerging hegemon and, if possible, to band together with like-minded neighbors for such a strategy. As I have written elsewhere, the behavior of Japan, India, Vietnam and other countries in Asia regarding China’s growing clout fits that pattern.

But balancing is the usual response of large and midsize powers. For small, relatively weak countries, the choice may be more complex and difficult. In some cases, there may be a greater incentive to appease the emerging hegemon, to bandwagon with it, rather than seek to balance it. The recent behavior of two countries in East Asia, the Philippines and Malaysia, is consistent with a bandwagoning strategy.

Early on in his tenure as Philippines president, Rodrigo Duterte stated bluntly that Manila’s foreign policy would not necessarily follow Washington’s wishes, despite the existence of the longstanding bilateral security alliance. Although U.S. policymakers initially thought that statement might be just for domestic consumption to placate hypersensitive Philippine nationalists, they quickly discovered that they were dealing with a leader determined to pursue his own policy agenda.

Duterte went on to indicate that he wished to work with both Russia and China, adding that that there would be no further military exercises with U.S. forces because such actions angered China. Then in October, he was in Beijing concluding an agreement with China (in exchange for a $24 billion aid package), and stating that it was China, Russia, and the Philippines against the world. He later tried to walk back some of his dramatic moves, insisting, for example, that the much-touted separation from the United States was only from U.S. foreign policy, not a severance of the entire relationship. Apparently he would still like his country to enjoy the protection of the U.S. military alliance in the event of trouble. And he would like to preserve a robust economic relationship with America.

But Duterte’s actions make clear that he believes that China is now at least as important a player as the United States for his country. He is no longer willing to have the Philippines be a convenient forward staging area for the U.S. military and a geostrategic pawn in a containment policy directed against China.

The Malaysian government has not been as ostentatious as the Philippines in its rapprochement with Beijing, but the actions of Premier Najib Razak certainly suggest a policy tilt toward China. During a six-day visit to Beijing in late October and early November, Razak signed 14 economic agreements worth $34.25 billion. In addition, his position on the territorial disputes in the South China Sea is that they should be addressed through “dialogue”—essentially echoing Beijing’s preferred approach. If those actions were not enough to hint at a growing Sinophilic orientation, Razak bluntly rebuked Western powers that had criticized his rapprochement with China—especially those countries, he charged, that had previously exploited populations in the region as colonial masters.

The question naturally arises: why are we seeing manifestations of a bandwagoning strategy now? There are a number of possible factors. The recognition of China’s growing power and a belief among some smaller states that attempting to counter it is both more hazardous and costly than learning to live with it. Another consideration is possible resentment against the United States and its allies as the incumbent hegemonic network. That certainly seemed to be the import of Razak’s comments.

And finally, there may be fading confidence in Washington’s willingness and ability to protect small security clients in East Asia. Christopher Layne’s recent excellent piece in this publication documented the perils of extended deterrence with regard to nuclear weapons. But extended deterrence—protecting third parties—is hard even at the non-nuclear level. Small client states have reason to wonder whether the United States would risk war with China to defend them from attack, much less to risk an armed conflict to back their positions on some lesser matter such as territorial claims in the South China Sea. Indeed, they might wonder whether the United States would be willing to jeopardize its overall relationship with China—America’s largest trading partner and the holder of nearly $1.2 trillion in U.S. Treasury debt—to back some minor client.

A bandwagoning strategy may make sense to an Asian nation caught in that position. The good news for Washington is that such behavior is likely to be confined to small states. Large powers like Japan and India seem firmly wedded to a balancing strategy. And when it comes to international power relationships, those are the countries that truly matter.