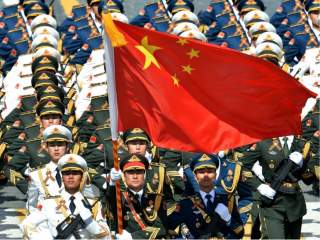 On Saturday, at the opening of China’s annual meeting of the National People’s Congress, President Xi Jinping took on Taiwan, the self-governing state that Beijing considers its thirty-fourth province.

“We will resolutely contain the ‘Taiwan independence’ secessionist activities in any form,” he said to NPC delegates from Shanghai. “We will safeguard the country’s sovereignty and territorial integrity, and never allow the historical tragedy of national secession to happen again.”

Taiwan analysts are now poring over Xi’s words to figure out whether he will push the issue in the near future. At first glance, his statements do not look as threatening as his other utterances on the topic, yet he introduced a new element in official thinking that may signal he is indeed planning to coerce the island. And his pronouncements come at a sensitive moment, just after Taiwan’s electorate resoundingly rejected closer relations with Xi’s People’s Republic. It’s not clear how far he will pursue his expansive claim to the island of twenty-three million people.

Many say they have heard all this before. “I don’t see anything new here,” said Robert Manning of the Atlantic Council to The Nelson Report, the Washington insider newsletter. Chinese leaders are expected to make ritualistic statements on Taiwan, and as Richard Bush of the Brookings Institution notes, “This is the stage of a sumo match when the wrestlers stomp around the ring, throwing sand or whatever they throw.”

Xi’s sand-throwing comments, his first on Taiwan since its historic January 16 election, could have been worse. After all, he did not repeat or amplify his October 2013 statement. “Increasing mutual political trust across the Taiwan Straits and jointly building up political foundations are crucial for ensuring the peaceful development of relations,” he told a Taiwanese envoy then. “Looking further ahead, the issue of political disagreements that exist between the two sides must reach a final resolution, step by step, and these issues cannot be passed on from generation to generation.”

Those words are now seen as the first public indication that Xi was committing himself to settle the Taiwan issue during his tenure as China’s leader, and they rattled many in the Taiwan-watching community. So far, however, Xi has not forced the issue of “reunification.”

People on Taiwan prefer the term “unification,” and the subtle difference highlights a major gap in perceptions. The Chinese Civil War, the struggle that started in the late 1920s between Xi’s Communist Party and Taiwan’s ruling Kuomintang, has in fact never ended. True, in 1949 the Kuomintang’s Chiang Kai-shek lost a full-scale military struggle to Mao Zedong and the Communists. Mao established the People’s Republic at the same time as Chiang fled to Taiwan and continued his Republic of China there.

After Chiang’s military failure, the ROC, as he called his state, included only the main island of Taiwan and scattered islets. Nonetheless, then as well as today, both Beijing and Taipei claim to be the legitimate government of all China.

In reality, the Communist Party rules the Chinese state and the Kuomintang is the governing party on “Taiwan.” Beijing, as noted, talks about “reunification,” but the word, is misleading because in fact the People’s Republic of the Communist Party has never exerted effective sovereignty over Taiwan.

Words matter for the two contestants in the ongoing Chinese Civil War, and Xi Jinping in his comments Sunday implied that Taiwan left the People’s Republic. He not only used the term “secessionist activities,” he also vowed to “never allow the historical tragedy of national secession to happen again.”

“When did the historical tragedy of national secession happen the last time?” asked the University of Miami’s June Teufel Dreyer in an e-mail to the National Interest. “Very strange.”

Strange indeed. In fact, if anyone seceded, it was Mao’s Communists, who left the Republic of China when they proclaimed their state in 1949 with a new name, new flag and new constitution.

“My gut tells me this is not just standard fare for domestic consumption but perhaps laying down a marker for more concerted action of some kind in the coming months,” said a U.S. government official speaking without attribution to the Nelson Report.

At the moment, everyone assumes the target for such action would be Taiwan. There, the electorate on January 16 decisively rejected Eric Chu, the candidate of the ruling Kuomintang, which had favored close relations with Beijing. More significantly, the ruling party lost control of the Legislative Yuan, the first time that had ever happened.

Beijing is obviously apprehensive. The Democratic Progressive Party of Tsai Ing-wen, the president-elect, wants good relations with Beijing but does not believe Taiwan is part of a greater Chinese nation. She and her party were carried to victory by voters who see themselves as “Taiwanese,” not “Chinese.” “Yes, Taiwan and China do have a special historic relationship, but Taiwan has developed its own identity and character,” said Gerrit van der Wees, editor of the Washington-based political journal Taiwan Communiqué, to the National Interest.

Because of that separate Taiwanese identity, nobody in Taiwan advocates “secession.” The victorious DPP believes that Taiwan, in Dreyer’s words, “is already an autonomous state and can’t secede from something it was never part of.”

Xi knows all that, so perhaps his words about secession were directed to another restive area, Hong Kong. Hong Kong is a “special administrative region” of the People’s Republic where many are now openly advocating independence from Beijing. Just as in Taiwan, increasing percentages of those in Hong Kong do not see themselves as “Chinese.” Increasingly harsh statements from Beijing are only fueling “localist” Hong Kong identity. The same dynamic is evident in the “minority” regions of Tibet and Xinjiang.

Xi’s Communist Party, therefore, is losing its grip on areas it considers its own. It demands that people on its periphery accept Beijing’s sovereignty over them, but that line has not been working recently. Taiwan Communiqué’s van der Wees says Xi Jinping needs “a new paradigm,” but it’s unlikely Xi, an insecure leader, can relinquish Beijing’s territorial claims, no matter how outdated or outlandish they may be.

“The Taiwanese people have more than earned self-determination,” Arthur Waldron told me recently. They have, but as the University of Pennsylvania professor says, Xi is “intoxicated” by his power and capable of “highly dangerous folly.” “The unelected and cossetted Beijing leadership,” Waldron notes, “is poorly educated, poorly informed, insulated from public opinion in China, lacks judgment, and may therefore make a terrible mistake.”