What Both Sides of the Sharia Debate Are Missing 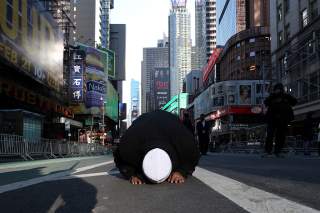 The past few years have seen a plethora of articles on the subject of sharia and its conformity or lack thereof with American law. Islamophobes have been busy whipping up emotions against Muslim Americans by arguing that the latter are engaged in imposing sharia law on an unsuspecting populace and that, therefore, sharia law should be banned in the United States as a preemptive measure.

Muslim apologists, on the other hand, have argued that there is no contradiction between sharia and the principles of the U.S. Constitution. They argue that sharia is a way of life that above all, they say up to 95 percent, encompasses prayer, fasting, charity and other noble acts that most Americans would find unobjectionable.

This has become a dialogue of the deaf, for the simple reason that the positions are either far removed from reality, in the case of the Islamophobes, or, in the case of Muslim apologists, largely irrelevant as far as American audiences are concerned. I am not interested in responding to Islamophobic arguments, because this has been done and done well by a number of serious scholars of the subject. My major concern in this article is to point out that the arguments made by fellow Muslims in defense of their position are also flawed, and to lay down a more effective strategy for combating Islamophobic views in the United States.

Muslim Americans must recognize that our non-Muslim fellow citizens are not concerned about those aspects of sharia relating to personal piety and moral conduct, for this does not impinge, except marginally, on the public sphere. What they are worried about—wrongly, I believe—is that there is a conspiracy among a segment of Muslims in this country to promote and impose sharia law, slowly but surely, on the American populace in place of laws based on the Constitution and America’s social and political values.

Many Americans take this argument seriously, despite the fact that Muslims make up only 2 percent of the country’s population and, therefore, lack the demographic heft to impose their religious preferences on others. Muslim writers and publicists should, however, begin to take this concern seriously, however ridiculous it may sound, because it has begun to influence the debate about the place of Muslims in America despite its obvious inanity.

Representatives of Muslim communities in America should begin by differentiating the personal-piety dimension of sharia from what is commonly referred to as “sharia law.” The legal aspect of sharia embraces both criminal and civil law, with the latter relating primarily to issues of marriage, inheritance and divorce. What some Muslims consider to be criminal law sanctioned by Islam is in reality inherited from tribal customs of centuries past, practiced in the Arabian Peninsula, now one of the most backward parts of the Muslim world.

The vast majority of predominantly Muslim countries no longer follow what many in the West consider to be Islamic criminal law. Only a few antediluvian regimes, Saudi Arabia foremost among them, implement the barbaric punishments that have given Islam such a bad name in the West. Those who elect to speak for Islam should make this point clear. They should also point out that the vast majority of Muslims in this country are not interested in having their hands cut off for stealing, nor in being stoned to death for adultery. Many Muslim scholars have contextualized such punishments, and argued that they are not applicable in modern societies.

As far as civil law is concerned, it should be made clear that there is no inherent contradiction between U.S. law and Muslim practices relating to marriage, inheritance and divorce. Where there seem to be apparent conflicts, they can be reconciled without much difficulty. All that is needed is some creative thinking, based on the premise that those living in the United States must obey American laws—something that Muslim Americans have been doing without complaint.

While according to Muslim traditionalists bigamy, even polygamy, is permissible, no one has argued that it is a religious obligation for Muslim men to have more than one wife. If the law of the land prohibits polygamy, it does not in any way come into conflict with this provision, which, even according to the most conservative interpretations, merely tolerates polygamy but does not mandate it.

Similarly, Muslim marriages are based on civil contract; they are not meant to be sacred and irrevocable, as in some other religious traditions. This is why, as under American law, divorce is permissible and increasingly frequent. It is true that, according to traditionalist interpretations, Muslim men have certain advantages over women in the process of divorce. But there are provisions that allow women to initiate the divorce process as well. Therefore, there is no religious impediment to Muslim women in America initiating the process of divorce under American law and taking full benefit of the provisions protecting their financial rights.

Likewise, traditionalist interpretations of Islamic precepts regarding inheritance discriminate against daughters in comparison to sons. However, in practice this should not contravene American law. In the United States a person is free to leave his or her assets to anyone he or she desires. This allows traditionalist Muslims to fashion their wills in a way they believe conforms with Islamic precepts. Others can basically do what they want with their assets: leaving them to sons and daughters in equal portions, donating to charity, or disposing of them in any other way. There is also the concept of hiba in the Islamic legal tradition, according to which Muslims can gift a part or all of their assets in their lifetime to whoever they choose. This conforms to the American practice of giving assets as gift, which is perfectly legal under American law and can be used by traditionalists Muslims to make gifts to daughters without contravening what they consider to be Islamic provisions.

Given the lack of contradiction between what many Muslims consider sharia practices and American law relating to civil matters, there is no reason for Muslims to be concerned about violating Islamic precepts while following the law of the land. Neither is there any reason for the vast majority of Americans to fear that there is a conspiracy among Muslims to impose sharia law on an unwilling majority.

This is a phony controversy, conjured up by parties with a vested interest in dividing the nation along religious lines, thus eroding the fundamentally secular nature of the American political system. It is unfortunate that important figures in the United States have fallen victim to the superficial attraction of this polemic. For their part, Muslim Americans must also understand that the secular character of the American constitution, which guarantees fundamental rights of all individuals regardless of religion, is the best guarantee for their security and prosperity, as well as for their freedom to practice their faith.

Image: A Muslim man kneels on Broadway Ave. as he takes part in afternoon prayers during an "I am Muslim Too" rally in Times Square, Manhattan, New York, U.S. February 19, 2017. REUTERS/Carlo Allegri.