What Caused the International Impasse Over Iran's Missile Program? 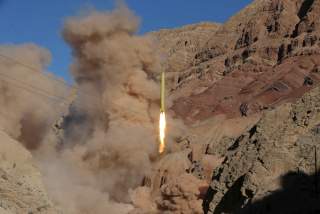 In the later days of the negotiations between the P5+1 (the five permanent members of the Security Council and Germany) and Iran over the country’s nuclear program, another in a long line of standoffs emerged. Iran’s negotiators argued that since the deal was supposed to eliminate all nuclear sanctions against Iran, the language against Iran’s missile program in a 2010 Security Council resolution should be stricken when the Council passes a new resolution endorsing a nuclear deal. They argued that since the resolution's language addressed the missiles in the context of their use as a potential nuclear delivery mechanism, they should be considered nuclear sanctions. The United States, a geopolitical adversary of Iran, disagreed. America’s European allies sided with the United States. Critically, Russia and China sided with Iran.

The fissures among Iran’s interlocutors led to a compromise that sets the current debate about the Iranian missile and SLV programs. In the last few weeks, after Iran’s testing of a Space Launch Vehicle (SLV), a number of experts have weighed into the technical and legal dimensions of the current row, but important political issues underpinning this debate need to be understood to put those valuable contributions to the debate in the proper context.

Anatomy of a Compromise

The compromise made in the context of the nuclear deal meant that the new resolution endorsing the agreement, called the Joint Comprehensive Plan of Action (JCPOA), would address the Iranian missile program but significant changes would be made in comparison to the 2010 resolution it supersedes.

“Decides that Iran shall not undertake any activity related to ballistic missiles capable of delivering nuclear weapons, including launches using ballistic missile technology, and that States shall take all necessary measures to prevent the transfer of technology or technical assistance to Iran related to such activities;”

While the new, superseding resolution 2231 says:

“Iran is called upon not to undertake any activity related to ballistic missiles designed to be capable of delivering nuclear weapons, including launches using such ballistic missile technology, until the date eight years after the JCPOA Adoption Day or until the date on which the IAEA submits a report confirming the Broader Conclusion, whichever is earlier.”

There are several key differences in the new language. The term “decides,” binding language referencing the UN Charter’s article 25 that demands members “carry out the decisions of the Security Council,” is swapped for the non-binding term “calls upon.” Therefore, there is no binding mandate being produced that Iran could theoretically violate. The superseding resolution also introduces an expiration clause.

Critically, the section “ballistic missiles capable of delivering nuclear weapons” is swapped for “ballistic missiles designed to be capable of delivering nuclear weapons.” Under the previous language, the United States and its allies successfully lobbied the UN to base its assessment of Iran’s compliance on a definition—any missile with a range of 300 kilometers and a payload capacity of 500 kilograms—in use by the Missile Technology Control Regime (MTCR). Effectively, testing any conventional missile of that basic level of competence would be deemed a violation. While some experts have defended the applicability of the MTCR’s definition as the “prevailing international standard,” Iran has long argued that the MTCR itself lacks the needed level of international legitimacy.

The MTCR is not an international convention but an export control regime; it is an exclusive club—or an “informal political understanding—of thirty-five missile-capable countries whose members have an interest in monopolizing this sensitive technology. Iran is not even a member. Therefore, treating it as a regulatory body or an independent source of expertise is somewhat problematic. The language in the superseding resolution essentially canonizes that objection. As experts and Russian officials have pointed out, whether a missile is “designed” to be nuclear capable involves adjudication of intent and cannot simply be gauged by examining its general competence alone.

The superseding resolution also removes any specific reference to SLVs that carry payloads such as satellites. The United States argues that Iran’s Simorgh SLV is threatening because the technology involved is “virtually identical and interchangeable” with those used in ICBMs. Many non-proliferation experts have disagreed with Pompeo’s position. In a recent assessment, IISS scholar Michael Elleman called that the notion that test launches using the Simorgh’s technology can directly supply Iran with ICBM capability “misguided.” He says such launches “will not significantly shorten the time or reduce the expenses needed to create a militarily viable long-range missile.”

Despite the missile issue being raised in the context of its potential use as a nuclear weapon delivery mechanism, Iran’s implementation of the JCPOA never subdued western objections. When Iran tested a ballistic missile after the passage of resolution 2231, the United States, Britain, France and Germany wrote a letter to the UN Secretary General claiming that Iran is “in defiance” of the new resolution because the tested missile was “inherently capable of delivering nuclear weapons.”

The United States, despite violating the superseding resolution by abandoning the JCPOA, has regularly reiterated this position. Pompeo recently claimed that resolution 2231 “calls upon the Iranian regime not to undertake any activity related to ballistic missiles capable of delivering nuclear weapons.” But, as explained above, these claims reflect the language used in the superseded resolution, 1929, not 2231. The U.S. media has been overly deferential to the State Department on this matter. Covering Pompeo’s statement, the Washington Post, Reuters, The Associated Press and The Hill parroted Pompeo’s reimagining of the superseding resolution's language or claiming the resolution opposes any ballistic activity.

As explained, the superseding resolution’s language was a compromise representing political arrangement, rather than a unified outlook, between the veto-wielding members of the Security Council. It was understandable that these western countries are unsatisfied with the outcome they were forced into, but their claims simply are not supported by the language in the newly adopted resolution, either in its letter or spirit.

For now, the two sides are in a tactical stalemate. The UN committee overseeing implementation issued a report saying that Iranian testing threatened the “constructive spirit” of the JCPOA but deferred to the Security Council on the interpretation of language—where Russia and China’s position makes any future follow up action unlikely. Iran will likely continue its missile and rocket tests, the United States and the Europeans will likely continue to object. Meanwhile, the barrage of thinly veiled threats from the United States against Iran, coupled with its broader campaign, will reinforce the position of missiles in Iran’s deterrence calculations.

While European statements present their position as an objective advocate for stability and arms control, their alignment in the Middle East’s geopolitical power struggle shapes the contours of this debate to a greater extent. China and Russia’s support for the Iranian position is often depicted as a craven ploy to cash in on arms transfers but their involvement in the region, while controversial, is not nearly as partisan as that of their western P5+1 partners who are closely allied with Israel, Saudi Arabia and other Sunni power. Europe’s direct role (or acquiescence) in the region’s arms build-up has put advanced weapons systems, including missiles and weapons of mass destruction, in the hands of Iran’s adversaries.

Israel developed nuclear weapons and ICBMs with significant European support and Saudi Arabia acquired advanced missiles from China with a range of 2,500 kilometers. Saudi Arabia is also in the process of purchasing nuclear uranium enrichment technology from the United States. Washington, even under the Obama administration, claimed Iran’s indigenous development of this technology is subterfuge for uranium weaponization. Europe has also become a pipeline for a massive flow of advanced arms systems in the region. The Middle East, awash in conflict, has also become the most lucrative arms market in the world and western firms and governments have aggressively embraced this destabilizing phenomenon.

Simply put, the European effort to play the well-intentioned non-proliferation activist regarding Iran is undermined by their role as permissive arms dealers to Israeli prime minister Benjamin Netanyahu and Saudi crown prince Mohammed bin Salman. In this context, Iran sees European policy as an effort to restrain Iran’s ability to develop a cheap missile deterrent leaving the qualitative military edge of its foes unchallenged and advancing the hegemonic aspirations of its allies such as Saudi Arabia.

In order to reach a modus vivendi with Iran on missiles, European leaders must decide whether they will continue to seek primacy in the Middle East for their Sunni and Israeli allies or accept that Iran is also a fixed element in the region with legitimate interests and influence. The latter would lead it to seek a more stable security structure in the area that accounts for the security interests of the many actors in the region.

Since leaving the JCPOA, U.S. officials have tried to minimize their differences with European powers as being tactical and not strategic. That is, of course, a vast oversimplification as the Europeans still consider the JCPOA an indispensable supporting pillar to the global nuclear non-proliferation regime. But as the drama surrounding security developments in the region unfold, Europe’s bifurcated policy framework leads to a practical set of policies that vaguely align with America’s more naked power projections.