What is Causing China's Recent War of Words on Washington? 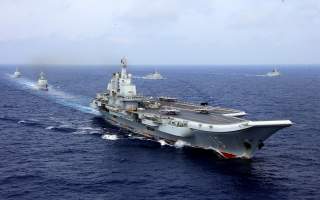 There is a gathering hysteria about the China threat. It's coming from Beijing.

While bipartisan concern about China mounts in Washington, officials describe the People’s Republic of China (PRC) as a rival, not a threat. Beijing is less restrained, as suggested by an emerging pattern of bellicose rhetoric and provocative behavior. China is raising the decibel level on U.S. and allied actions or possible actions, from the South China Sea to South Asia, and from Taiwan to technology and beyond.

One irony of this development is that for years Sino-centric spin doctors have deployed the hackneyed phrase “so-called China threat” to disparage American, Japanese, Indian and other foreign threat perceptions. The currently prevailing narrative of the Chinese Communist Party (CCP) and state media reinforces the notion that America and its allies are hyping the military challenge posed by People’s Liberation Army (PLA) modernization and supporting measures. China wants America to know about that modernization program. Consider that China Central TV this week reported that the PLA Rocket Force conducted a mock intercontinental ballistic missile (ICBM) strike and hinted that Beijing could debut its advanced DF-41 ICBM later this year to mark the seventieth anniversary of the PRC.

Whatever one thinks about the Trump administration’s overdue U.S. effort to better compete with China, officials in Beijing more than Washington are reaching for the verbiage of brinkmanship.

Beijing’s menacing overtones apply especially but not exclusively to defense-related operations and programs. By contrast, Chinese officials and supporters offer more nuanced rebuttals over economic issues. For instance, arguments against U.S. tariffs and trade pressure or attempts to restrict the flow of high-technology or improve vetting over foreign investments can be brushed aside by accentuating the win-win aspects of commercial and financial dealings—or conversely, the opportunity costs of sanctions. This applies to everything from China’s One Belt, One Road Initiative (“the project of the century”) and Made in China 2025 (a means to “gain reciprocal benefits”) to the potential espionage and security role of telecommunications giants such as Huawei (which can help China become “a more open country”). Although even in these typically cooperative areas, the language of war is creeping in. In advocating for Made in China 2025’s strategy to achieve primacy in tomorrow’s leading-edge technologies, one commentator opined that “China’s manufacturing sector faces a protracted war that’s similar to the Anti-Japanese War (1937–45) it fought.”

The CCP enjoys structural advantages over democracies in forging whole-of-society policies. The U.S. policy proclivity of segregating security from economic goals and vice versa gives Beijing greater latitude to seek strategic advantage. But China’s increasingly blunt warnings intimate a level of confidence that may work against policy integration and allows for greater rhetorical intemperance. Not to put too fine a point on it, but officials in Beijing don't appear to care as much as they once did about how the world perceives their behavior—something that highlights the limits of name-and-shame tactics for exacting costs on China misdeeds.

Official U.S. documents have danced around the issue of what the PRC constitutes vis-à-vis the United States. Once a strategic partner and responsible stakeholder, however, increasingly China is portrayed as a strategic competitor or rival. Whereas the Obama administration’s 2014 National Intelligence Strategy said “China has an interest in a stable East Asia, but remains opaque about its strategic intentions” the Trump administration’s 2019 National Intelligence Strategy finds China "a concern, though opportunities exist to work with Beijing…” Even a new China Military Power report produced by the Defense Intelligence Agency throttles back when describing the PLA's mandate to “fight and win” future wars. The unclassified intelligence report refers to ways China poses a “concern” and speaks gently of China’s “preference” for transforming regional security. "Since at least the 1990s,” the report observes, “Beijing has repeatedly communicated its preference to move away from the U.S.-led regional security system and has pursued its regional security initiatives in support of what it views as a natural transition to regional predominance." One can appreciate the need for intelligence to remain objective, but the implications of what the Chinese intend to do with this “preference” is left to the imagination of the reader.

Fortunately, Beijing seems peculiarly eager for Western-style bluntness. At least many officials and pro-China commentators appear to be working hard to change the perception of peaceful rise. From Beijing’s perspective, primary threats center on issues of sovereignty and domestic security that could question CCP legitimacy. So, China has ratcheted up its assertiveness over issues that come close to its periphery or internal core issues.

For example, consider the incident involving USS Decatur at the end of last September. The U.S. Arleigh Burke-class guided-missile destroyer was conducting a legal freedom of navigation operation (FONOP) near Gaven Reef in the Spratly Islands archipelago off the coast of the Philippines, Malaysia, and Vietnam when a PLA Navy (PLAN) Luyang-class destroyer deliberately crossed within forty-five yards of its bow. Evasive measures were taken to avoid a collision as a result of the PLAN’s intentionally reckless maneuver.

In an era dominated by “Xi thought,” it is no surprise that China’s baring of teeth starts at the top. And shortly after the bow-crossing maneuver, Xi Jinping encouraged the PLA’s Southern Theater Command to make more assertive responses to FONOPs in the South China Sea. Xi commanded the military to focus on its “battle-winning ability.” Meanwhile, the day before Xi’s speech, State Councillor General and Defense Minister Wei Fenghe declared that Beijing would never relinquish “one single piece” of its territory. Wei warned that “repeated challenges” to China’s sovereignty over Taiwan would trigger a military response.

China has cranked up the volume even further after those admonitions from CCP General Secretary and Chairman of the Central Military Commission Xi and Defense Minister Wei.

In early December, Senior Colonel Dai Xu, president of China’s Institute of Marine Safety and Cooperation, suggested that the PLAN should ram U.S. ships sailing in international waters. As Dai reportedly said, “If the US warships break into Chinese waters again, I suggest that two warships should be sent: one to stop it, and another one to ram it. . . . In our territorial waters, we won’t allow US warships to create [a] disturbance.”  Dai did not bother explaining how ramming a U.S. combatant would avert a “disturbance.”

Speaking in Shenzhen on December 20, retired Major General Luo Yuan, the deputy secretary-general of the Chinese Academy of Military Sciences, advocated “asymmetric counterattacks” against America’s vulnerabilities. Because, according to Major General Luo (sometimes identified as Rear Admiral Luo), one “soft spot” of the U.S. Armed Forces is its risk aversion, he recommended sinking two aircraft carriers to shock America by killing ten thousand crew members. “We’ll see how frightened America is,” said Luo Yuan, who, as with Dai Xu, is no novice when it comes to lobbing rhetorical grenades.

At the end of December, after another U.S. destroyer, USS McCampbell conducted a FONOP off the Paracel Islands, the PLA spokesman denounced the lawful ship movement as “a grave violation of Chinese law and relevant international law” and “a grave threat to regional peace.”

U.S. Chief of Naval Operations, Admiral John Richardson, visited Beijing in mid-January to engage counterparts in establishing standard rules of the road to reduce tension and mistrust. However, in the midst of the high-level military discussion, China's chief of staff Li Zuocheng issued a thinly veiled threat to the United States or others who assist Taiwan. Warned Li, China would defend its claim to Taiwan “at any cost” to guarantee its sovereignty. Perhaps Li thought he could evoke President Kennedy’s exhortation to “pay any price,” but when delivered to the top naval officer of a strategic competitor, the phrase sounded far more ominous. Admiral Richardson could have walked out of the meeting or issued a direct rebuttal to the effect that Washington will never remain idle while someone seeks to alter the status quo through force. Instead, the American submariner adopted a more statesman-like and stoic response, explaining that “We don’t see any kind of limitation whatever type of ship could pass through those waters.” On Twitter, Admiral Richardson underscored the benefits of direct communications, but he stopped short of suggesting the PLA would fundamentally alter its rhetoric or behavior.

Meanwhile, Taiwan responded with live-fire exercises while China flew both fighter and surveillance aircraft to let Taipei know it was watching, thus continuing the resurgence of the Taiwan issue to the upper echelon of regional flashpoints. China is doubling down on pressure against Taiwanese president Tsai Ing-wen, whose Democratic Progressive Party suffered a severe defeat in local elections held in November. Government websites boasted of testing a gigantic gravitational bomb, as well as a PLA assault exercise, both of which seemed to have Taiwan in the crosshairs. China’s psychological pressure also includes a broader crackdown on freedom in Hong Kong (“Today Hong Kong, tomorrow Taiwan” goes the phrase), including an apparent ban on serious history books such as Robert Bickers’ Out of China: How the Chinese Ended the Era of Western Domination.