What China Can Teach America about the North Korea Threat 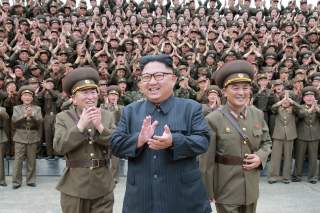 North Korea successfully tested an intercontinental ballistic missile on July 4. Less than a month later, it successfully tested a second ICBM, one with an extended range. In the same month, the Defense Intelligence Agency concluded that the Hermit Kingdom may have as many as sixty nuclear weapons, and that it has succeeded in producing a compact nuclear warhead for ICBM-class missile delivery. These developments demonstrate that North Korea, a member of the nuclear club since 2006, has the potential capability to strike the continental United States, in addition to Guam, Alaska, Hawaii and U.S. allies in the Asia-Pacific region. In fact, after the president reacted to the latest development of missile-ready weapons with the language of “fire and fury,” the North Koreans threatened to strike Guam.

Amid heightened tensions between North Korea and the United States, the possibility of military conflict has become increasingly likely. North Korea’s nuclear capability and repeated provocations rightly concern the United States and the global community, and the regime is a human-rights violator of an unimaginable magnitude. But our good options are few. To navigate the geopolitical terrain, we should apply lessons of history that may provide insight to our situation. One analogy is especially salient: China in the 1960s.

Analogical reasoning can be imperfect because it relies on superficial similarities to frame an environment and prescribe (or proscribe) action. Often, analogy selection is more a function of an analyst’s experiences than the objective strategic environment. But taken with caution, the parallels can be instructive.

China acquired nuclear capability in October 1964 under Mao, who was on the brink of starting the Cultural Revolution that claimed several million lives. Chinese acquisition initially surprised and frightened many American and Soviet defense analysts, but most recognized the need to consider the strategic implications of China’s nuclear capability.

In fact, in 1961, three years prior to Chinese acquisition, the Air Force had prepared three contingencies to deal with Chinese nuclear development. The Phase III contingency assumed Chinese capability to attack the United States. In this condition, the Air Force concluded that U.S. strategy “must apply the same sanction to [Chinese] aggression that now apply to Soviet aggression in Europe: any overt major aggression leads to general war.” In other words, deterrence should obtain, and it did.

During China’s 1963 development phase, General LeMay—chief of staff of the Air Force and the first commander of Strategic Air Command—suggested to the Defense Secretary the need for joint U.S.-Soviet measures to secure Chinese acquiesce. LeMay and his fellow chiefs apparently did not recognize the depth of the Soviet-Sino split, believing Moscow was better positioned than Washington to pressure Beijing. However, the joint chiefs did recognize it “unrealistic to use overt military force” to effect Chinese acquiescence. Most of their civilian colleagues agreed.

“The U.S. will have the ability to destroy Communist China . . this great asymmetry in . . . capabilities and vulnerabilities makes Chinese Communist first-use of nuclear weapons highly unlikely except in the event of an attack,” Rostow wrote in the memorandum.

Despite Mao’s apparent madness (later, he allegedly boasted that China’s population could absorb nuclear bombing), Rostow believed that Mao would internalize the clarity of nuclear deterrence. Indeed, for Rostow the Chinese had demonstrated “prudence in the use of military force” in the Korean War.

However, some observers did not share this analysis. The U.S. ambassador to Taipei noted that American restraint could prompt a “crisis of confidence” among key allies. His Taiwanese contemporaries favored “strangling the baby in its crib,” just as President Abe currently favors bolstering Japan’s independent defense capability and bilateral security cooperation with the United States. Of course, close proximity can inflate a threat environment, as does an adversary’s reputation for provocation.

The North saber-rattles, but it also calibrates risks to avoid conflict. One need not conflate provocation with miscalculation. Recall that Mao risked intervention in the Korean War despite America’s qualitative superiority, but never issued nuclear threats after China acquired the bomb. The Kim family’s first order preference is to survive, and indeed for over sixty years it has. After all, the measure of rationality is the stability of ordered preferences. Kim is not suicidal, far from it. He understands that his first use of a nuclear weapon would merely invite his demise.

A U.S. first strike on North Korea would be preventive, not preemptive. A preemptive strike occurs in the face of imminent and immediate attack; North Korea does not yet meet that standard. A preventive strike seeks to maim an adversary before she becomes more powerful. Preventive strikes not only destabilize security environments, but also violate international law.

A successful preventive strike would require that the United States eliminate North Korea’s second-strike capability–i.e., its ability to absorb an incoming strike and credibly retaliate. The North knows this, and takes great care to assure the invulnerability of its second strike forces. A U.S. strike might eliminate 95 percent of the North’s arsenal, but what of the remaining 5 percent? The United States cannot risk the partial survival of nuclear forces, because the North can then deploy those weapons against U.S. allies or the homeland.

Richard Fontaine, former associate director at the National Security Council for President George W. Bush, considers a possible strike against select targets, while Washington communicates to Pyongyang that the strike is limited. Risk assessment cautions against such an operation. Just as a comprehensive strike risks the survival of second-strike forces, a selective strike gambles with North Korean retaliation.

Instead, suppose a U.S. strike neutralizes the North’s capacity to retaliate, perhaps destroying the delivery systems but not the entire nuclear program. Or a surgical strike decapitates the North’s leadership and paralyzes their command and control. Either scenario—or one in between—could invite the regime’s fall. But this would not bring about a peaceful end.

If the regime falls, then millions of malnourished refugees would flock to the Chinese and South Korean borders. This would produce a humanitarian disaster that we are ill prepared to address. At the same time, U.S. forces would advance across the 38th parallel to snatch loose nukes. And Chinese soldiers are likely to meet them at the weapons sites. In his recent book, Destined for War, Graham Allison describes this contingency as a potential catalyst for a Sino-American war. Beyond its arsenal, China has vital interests in the North. For a half century, China has supported the North to inhibit U.S. power projection across the Korean Peninsula. Beijing has no fondness for Kim, but it prefers to hold a wolf by the ears than to release it. China cannot permit a U.S. occupation of its southern buffer zone and will mobilize forces to prevent it, just as it did in 1950 when U.S. forces crossed the 38th parallel after driving the North Koreans out of the South.

Moreover, a U.S. strike might affirm the North’s self-perception of insecurity. It could eliminate the already dim possibility that North Korea would one day surrender its arsenal. In fact, rogue states are then more likely to accelerate their procurement programs. It might also discourage eventual political transition or reform, because the Pyongyang elite may rally around the flag rather than grow apart or defect.

If the military option is not credibly on the table, any more than it was with China, then what should the United States do about North Korea? It should suffer no illusions about the North’s eventual democratization or convergence into the global order as a responsible stakeholder. It should also not think regional players like China have the capability, interest, or wherewithal to address the issue alone. Of course, the latest round of Security Council sanctions, which required Chinese support, is welcome news. But sanctions alone do not suffice the North Korean dilemma if those sanctions are independent of a broader strategy.

The United States should leave open the possibility of incremental reform in the long run, as President Nixon’s 1972 opening to China demonstrates. Despite his hardline instinct—indeed one that LeMay and Rostow shared—Nixon’s commitment to diplomacy realized grand-strategic gains against a larger adversary. “Strategic patience” and deterrence, which the recent flyover, THAAD and ICBM tests reinforce, have been—and still remain—the least bad option.

Dr. Lawrence Korb is a Senior Fellow at the Center for American Progress. He is also a senior advisor to the Center for Defense Information and an adjunct professor at Georgetown University, and formerly served as assistant secretary of defense (manpower, reserve affairs, installations, and logistics) from 1981 through 1985.

Yashar Parsie is an intern at the Center for American Progress, and studies political science at the University of Washington, Seattle.

Image: North Korean leader Kim Jong Un claps with military officers at the Command of the Strategic Force of the Korean People's Army (KPA) in an unknown location in North Korea in this undated photo released by North Korea's Korean Central News Agency (KCNA) on August 15, 2017.​