What the Chinese Communist Party Can Learn from Mexico 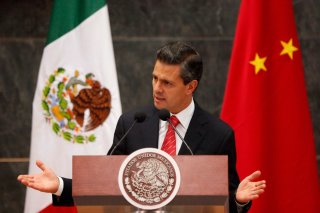 Why has the Chinese Communist Party (CCP) survived and thrived while the Communist Party of the Soviet Union (CPSU), along with the USSR itself, fell apart? There have been regular discussions on how the CCP compares to its Soviet counterpart, particularly given the CCP’s reported obsession with the Soviet Union’s collapse. Yet though the comparison is essential, it is also incomplete and fails to address the above question fully.

Perhaps a better approach to understanding the CCP’s longevity would be to look at Mexico’s Institutional Revolutionary Party (PRI), which governed the country without interruption from 1928 until 2000. Though there are differences in how both parties took power, particularly the PRI’s exploitation of Mexico’s illiberal democracy, various similarities exist. Learning about the PRI and its loss of power can provide a framework for understanding the CCP’s long-term predicament and how the CCP could potentially avoid the PRI’s fate.

Both parties have significantly different origin stories. The CCP began as a grassroots movement started by intellectuals that later won power with the support of the rural peasantry. On the other hand, the PRI had no such humble origins; it was a party founded by a political elite looking to provide stability after two decades of civil war, coups, and high-profile assassinations. The best way to comprehend the party is to understand the juxtaposition behind its name. It was revolutionary (at first), given its support for the 1917 Mexican Constitution and support from the working and peasant classes. Yet, it was also institutionalist-oriented, given that the party focused on a conservative “evolution” rather than a widespread revolution. This starkly contrasts with the CCP under Mao Zedong, which strove towards the idea of “continuous revolution” to protect their revolution from perceived reactionary forces. Mao’s efforts resulted in famine and purges until Deng Xiaoping’s rise ended Maoist sentiments within the CCP.

But despite differing origins, both parties eventually adopted a general authoritarian stance. This is not to say that they don’t profess any public ideology to justify their legitimacy. Instead, both parties utilized a mixture of favoring special interests and achieving domestic success (like continued economic growth) to maintain their grip on power. Consider, for example, how President Xi Jinping has enshrined his own Xi Jinping Thought into the state constitution, emphasizing preserving China’s rise and elevating himself to be equivalent to Mao and Deng. Indeed, Xi Jinping Thought is more ideologically focused than his predecessors, particularly its emphasis on Confucian values. But this ideology is less of an affirmation of the CCP’s principles and more of a reactive justification for the Party’s continued rule. Ultimately, both parties share many similarities in preserving their power and function as political parties without a solid attachment to their original ideologies.

The PRI and the CCP are authoritarian-oriented parties that, at their peak, desired to maintain their power through coercion and a solid economic track record. The need to hold onto power can go so far as to massacre dissidents, as seen in Tlatelolco in 1968 and Tiananmen Square in 1989. Both parties depend on fundamental special interests and critical support groups to keep them in power. In China, these manifest in party factions like the Shanghai Gang or the Chinese Communist Youth League, while Mexico’s PRI had sectoral groups and unions that were its electoral backbone. These special interests eventually led both parties to tacitly embrace corruption to ensure both patronage and personal wealth, though it manifests differently in the two parties. In China, corruption is centered around nepotism and rent-seeking, while in Mexico, corruption manifests mainly through organized crime, like the drug cartels, which tacitly supported the PRI. While both parties officially condemn corruption, especially with China’s anti-corruption initiatives or President Peña Nieto’s extradition of notorious drug kingpin Joaquín “El Chapo” Guzmán, their dealings with corruption suggest these initiatives are more focused on preserving party legitimacy and disciplining excessively-corrupt party members rather than promoting transparency.

Lastly, both parties share similar leadership succession rules—namely, the incumbents choose their successors. In Mexico, this process was called El Dedazo, where the president under PRI rule selected his successor. Of course, the party had to participate in the democratic process formally, but this amounted to a legitimacy-granting pretext. The elections were so one-sided that Nobel laureate Mario Llosa called Mexico “La Dictadura Perfecta”—the perfect dictatorship—for their democratic deceptions. In China, succession is more like a Russian nesting doll, with the CCP Party Congress electing the Central Committee, which then elects the General Secretary. In practice, however, the Central Committee predecessors select the next leaders, and the Central Committee is a rubber stamp. Interestingly, both parties enshrined term limits for the top position in their respective country’s constitutions. It is Xi Jinping who has relatively recently abrogated those term limits, allowing him to remain in power indefinitely.

The PRI’s Fall and its Lessons for the CCP

Though the CCP and PRI share several similarities, the comparison ends with the PRI losing control. In the 1970s, Mexico underwent severe economic turmoil, even defaulting on its foreign debt, undercutting the PRI’s legitimacy. This led to the PRI embracing neoliberalism under technocratic presidents Miguel de la Madrid and Carlos Salinas de Gortari, to the ire of the party’s left-wing base. The factional differences between the neoliberals and the left led to a party split in 1988, with the left forming the National Democratic Front (and later the Party of Democratic Revolution, or PRD). The split, combined with failed reform efforts and the 1994 Tequila Crisis, irrevocably damaged the party, leading to widespread losses in governorships and the legislature. Eventually, the PRI lost its seventy-two-year rule when the opposition National Action Party (PAN) won the presidency in 2000. The PRI remains, yet it is a shadow of its former self.

In China, the CCP is nowhere near losing its hold on power. However, the party’s lack of legitimacy beyond economic and foreign policy performance means that the CCP’s rule may be more fragile than most assume. China faces significant issues addressing the public’s general welfare, from healthcare to a durable safety net. Continued failures in handling various topics, such as handing over the Covid-19 pandemic, or job creation efforts for the country’s youth, can chip away at the party’s legitimacy over time. In the short term, China will continue its rise, and the CCP will maintain its grip on the state. But in the long term, when China’s sclerotic issues with demographics, corruption, and general welfare start to take a toll, the CCP’s legitimacy may weaken or even disintegrate completely, leaving them to share the PRI’s fate.

For the CCP to maintain its rule, the party needs to drastically reform its practices to maintain legitimacy. It must enforce term limits among party leadership and reform succession rules to ensure fresh leaders can develop within the CCP. It must also bolster welfare and reduce inequality, particularly in China’s interior, to reinforce its popularity with its power bases. Finally, it must continue its steady track record of economic growth through industrial policy and private-sector innovation to provide stable employment for its youth. If it can bolster its economic track record, it can maintain its popularity with the youth and prevent factional splintering between the Communist Youth and the rest of the party. The CCP is determined not to lose power like the Soviets, but if they want to see how they can lose their power, or how they can maintain it, they should look to Mexico’s PRI.

Heberto Limas-Villers is a management consultant living in Washington, DC. He was previously a graduate fellow at the National Defense Industrial Association focusing on naval policy and the defense industrial base.