What Comes Next for Syria? 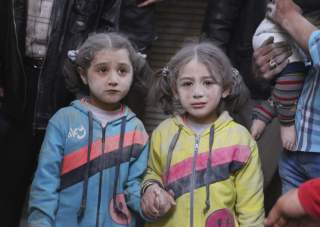 After over seven years of bare-knuckled combat, over a half a million deaths, over 11 million people either internally displaced or pushed into refugee camps, and whole swaths of Syria leveled to the ground, the endgame of Syria’s civil-turned-proxy war is finally in sight.

There is no denying the inevitable—through brute and indiscriminate force, steadfast resistance to all political negotiations, and a war strategy that can only be described as a catalog of war crimes, Bashar al-Assad has all but won the war against him. A local protest movement that spiraled into a nationwide armed insurrection against the family that has ruled Syria as its personal fiefdom for the last four decades is dying a slow, painful and ugly death. The Assad regime proved to be far more durable than the United States, Britain, France, and much of the Arab world believed when the first anti-government demonstrators took to the streets. The dominant belief in Washington was that, sooner or later, Assad would meet the same fate as Egypt's Hosni Mubarak, Tunisia's Zine Abidine Ben-Ali, and Libya's Muammar al-Qaddafi. Most people thought he would either die at the hands of his enemies, be removed by the men in uniform, or forced to run away into exile with his tail between his legs.

None of these predictions, of course, panned out. It’s difficult to dodge the conclusion that the West was woefully naive about Syria’s political dynamics. Assad had assets other Arab dictators didn’t—a core security force whose future and survival depended on Bashar staying in power; state supporters that viewed the Syrian autocrat as the only man who would protect Syria’s territorial independence against the whims of foreign sponsors. Furthermore, Assad’s opponents in the Sunni Arab world unable or unwilling to coalesce and build a viable and unified anti-Assad armed opposition.

The story of Syria, however, will continue—even if Assad continues to sit comfortably in the presidential palace on the mountain overlooking Damascus. There are still a lot of things we don’t know.

1. What will happen with the U.N’s Syria diplomacy?

The United Nations, to its credit, realized almost immediately that a comprehensive, intra-Syrian political resolution was the fastest and most peaceful way to end the dispute. The other option—military conflict—would tear the country apart, kill untold numbers of civilians, and reverberate throughout the broader region as millions of people crossed national borders to save their families from death or imprisonment. The U.N. appointed three of its most experienced and respected diplomats to manage the Syria portfolio on a full-time basis: the late U.N. Secretary General Kofi Annan, troubleshooter Lakhdar Brahimi, and long-time diplomat Staffan de Mistura. All three men wholeheartedly endorsed the same general peace framework, which entailed getting the Assad regime and the opposition around a table to agree to a mutually-acceptable transitional government on the road to free and fair presidential and parliamentary elections.

Bashar al-Assad, however, had no intention of playing ball. He directed his representatives to stall, lambaste the proceedings, defile the opposition as well-groomed jihadists in suits attempting to disguise their sympathy for Al-Qaeda and to reject any political formula that would require early presidential elections. Annan and Brahimi eventually lost their patience and gave up, blaming the combatants for refusing to seriously engage in the process and the U.N. Security Council for internal divisions. De Mistura has been in this thankless job for four years and is nowhere closer to a peace settlement than his predecessors were. And with the Syrian army on the offensive, De Mistura is now essentially a lonely man in the wilderness shouting at the trees. The U.N. peace process is dead—if it was even alive to begin with.

2. What will become of Idlib?

Syria’s northwestern province of Idlib is the last major area of the country controlled by the armed opposition. Assad, for obvious reasons, wants to retake the province and flush out or kill the roughly 70,000 fighters who have ruled Idlib in full since tired and demoralized Syrian army troops scurried away in defeat in 2015.

A military campaign in Idlib, though, will not be like previous pro-government offensives. Unlike the operations in Homs, Aleppo, Daraya, Douma, Deraa, and in the towns along the Golan Heights, there is nowhere for rebel fighters to run or evacuate. What remains of the anti-Assad rebellion doesn't have a choice to enter into a reconciliation deal which allows them to evacuate to another part of the country with their weapons. They have three options: fight to the death and risk perhaps the war's biggest humanitarian catastrophe (this is the choice Hayat Tahrir al-Sham is advocating); surrender unconditionally and accept Assad’s dominion; or hope for Turkey to carve out a safe zone that Assad’s men and Russia’s fighter-bombers won’t cross.

The residents of Idlib, a province whose population has doubled since the war, are meanwhile preparing for the absolute worse.

3. Who will take care of Syria’s post-conflict reconstruction?

Syria was once a beautiful nation filled with ancient history and breathtaking architecture. The war has pulverized much of that beauty; all you need to do is take a few looks at satellite images to witness the extent of the physical devastation. Entire city districts have been wiped out and reduced to rubble, rebar, broken cement, white dust, and detritus. Syria’s national healthcare infrastructure is gutted. Its economy will take perhaps a generation to recuperate to pre-war levels. And the country’s brain drain is as dramatic as that of any conflict in the contemporary era. In 2017, the World Bank calculated that Syria’s economy lost $226 billion in GDP between 2011 and 2016. In November 2017, the U.N. estimated that it would take at least $250 billion to fund Syria’s long-term reconstruction and rehabilitation—a figure that has likely only increased since the projection was made.

If Assad is looking for any handouts from the United States or the European Union, he will have to look elsewhere. The Trump administration has made it clear that no American money will be devoted to Syria’s reconstruction until a U.N.-certified political process is well underway. Ditto the European Union, which has followed Washington’s lead on Syria from the get-go. Russian President Vladimir Putin is understandably nervous about the lack of Western participation in post-war Syria because he doesn’t have the resources or the will to rebuild the nation on his own. Russian Foreign Minister Sergei Lavrov and Russian representatives at the U.N. are traveling to New York and Europe with a tin cup asking for handouts. Moscow has tried guilt-tripping the West, arguing that Syrians who were pushed out of their homes will only be able to come back to their country and restart their lives if they have something to come back too. The United States and the European Union remain unpersuaded: Russia, after all, helped break Syria. Now it has the responsibility to stick it back together.

The Syrian civil war is entering the final stage of large-scale combat, yet the end of the war will not mean the end of Syria’s trauma. The country will be a blistering sore for the region for years to come. Assad may have won the war, but he may not be equally committed to winning the peace.