What the Democrats Should Do on Trade 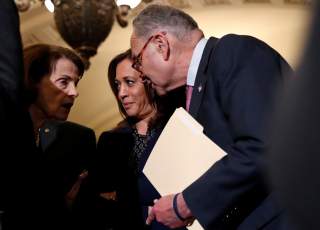 Reflecting on the Smoot-Hawley Tariff Act of 1930 six months after its passage, Senator Reed Smoot (R-Utah) declared: “The improvement since passage of the act has been a gradual and a healthy one, and in my opinion is one of the most healthy signs on the economic horizon.” History has not been kind to Smoot’s assessment. Even nearly nine decades after its passage, invoking the phrase Smoot-Hawley is a kind of shorthand for a legislative disaster. With the Trump administration pursuing the most aggressive protectionist agenda since Smoot-Hawley, the incoming Democratic majority in the House should work with pro-free trade Republicans in the House and Senate to avert a similar disaster.

Smoot-Hawley’s contribution to the worsening of the Great Depression was not a surprise. Over a thousand economists signed a letter warning of its disastrous effects. But just knowing how the bill was made ought to have been enough to estimate its impact. Smoot-Hawley was the product of a smorgasbord of legislative horse-trading, with members of Congress fighting for their own districts’ interests with little regard for the overall picture; the result was about nine hundred tariff increases that effectively ignited a trade war. Representative Cordell Hull (D-Tenn.) condemned the bill as having ensured “that the worst type of log-rolling and political pressure of conflicting interests will be continued.”

By March 1933, Hull had become Franklin Roosevelt’s Secretary of State, and he began the arduous task of reversing the economic and diplomatic damage done by Smoot-Hawley. To avoid the parochialism that guided their predecessors, the New Deal Congress sought to change the process by which the country set its trade policy. It did so by delegating authority over trade policy to the executive branch and independent agencies, a process that began with the Reciprocal Trade Act of 1934 and continued nearly through the present.

This shift of power over trade policy to the executive has, by now, created a new opportunity for the arbitrary raising of tariffs and unnecessary provocation of trade conflicts. Rather than Congress, the culprit is now the president, who has broken a decades-long pattern which saw the executive branch devoted to trade liberalization. Guided by a mercantilist economic worldview, the Trump administration has used its delegated authority to impose tariffs on a wide variety of goods, including steel and aluminum, as well as on imports from China.

After adding burdens with one hand, the administration offers to relieve them with the other, creating a mad dash of trade lawyers and lobbyists seeking exemptions that result in an opaque and unfair mess. Meanwhile, the president has expressed his desire to change the trade landscape even more dramatically, by threatening withdrawal from the North American Free Trade Agreement (NAFTA) and the World Trade Organization.

In a new policy study, we explain what members of the 116th Congress should do if they want to follow in Hull’s footsteps and fix America’s trade policymaking process.

First, Congress should clarify that the president doesn’t have unilateral authority to withdraw from trade agreements like NAFTA. For instance, much like the authority Congress retains to approve or disapprove of trade agreements negotiated by the executive branch, it should also take a joint resolution from the legislative branch to formally withdraw the United States from trade agreements already in effect or to alter any tariff reductions or other concessions contained in such agreements. Therefore, as House Democrats look toward negotiations over the administration over the proposed replacement for NAFTA, they should be eager to limit the president’s leverage by making it clear that he can’t withdraw from the agreement without congressional consent.

Next, Congress should establish a mechanism to approve or disapprove unilateral trade policy decisions the executive branch has been making. As a policy matter, numerous members of Congress in both parties are uncomfortable with the president’s unilaterally imposed tariffs. Creating an up-or-down approval process would protect against poorly considered import restrictions by adding a procedural hurdle before such rules can go into effect. On the process side, a congressional pre-approval process would provide much-needed accountability.

Likewise, in light of the thin justifications the administration has used to impose steel and aluminum tariffs, Congress should more tightly define “national security” under Section 232 of the Trade Expansion Act. The law should ensure that only genuine national security threats are covered while excluding products from countries with which the United States has mutual defense treaties. The new House majority also should change the process for making national security determinations. The defense secretary, rather than the commerce secretary, is better able to determine whether imports truly threaten national security. The Pentagon should be the primary decision maker.

For nearly ninety years, the United States has largely embraced a bipartisan policy in favor of open markets and global economic leadership. Today, that leadership faces a serious challenge from the Trump administration. The Democratic Party has an honorable history of reversing damaging protectionist trade policies. Working with some like-minded Republicans, 2019 will provide congressional Democrats another opportunity to stem the growing protectionist tide.

Clark Packard is trade policy counsel at the R Street Institute. In addition to his research and writing about trade policy, Clark does outreach work for the finance, insurance and trade department at R Street.

Philip A. Wallach is a senior fellow of governance at the R Street Institute, where he researches America’s separation of powers with a focus on the relationship between Congress and the administrative state. He also follows a wide range of regulatory policy issues, including the efficacy of the Trump administration’s deregulatory efforts.