What Did America Gain from Trump's World Tour? 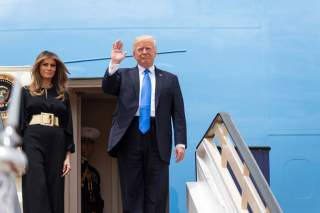 The White House has hailed the president’s maiden voyage overseas as a triumph of historic proportions. But what did Donald Trump actually accomplish on his first foreign-policy adventure?

There were ample doses of high-sounding presidential rhetoric; a fair amount of presidential strutting (and pushing too); evocative photo ops; pageantry; and remarkably few fumbles, stumbles and bumbles in the choreography for a complicated enterprise with so many moving parts.

But what of the substance? Did the trip advance U.S. foreign-policy goals, exploit new opportunities, set potential agreements in motion, or manage complex relations with allies? Did it provide any relief, let alone a reset, for a much embattled and beleaguered presidency? And above all, is America now back on the international stage, as Trump’s supporters maintain?

Here are five takeaways. They strongly suggest that the trip was not the “home run” he declared it to be, and indeed, many of the touted accomplishments remain works in progress.

1. Was the Channel Changed?

Briefly, if at all. The trip was surprisingly well orchestrated, given its complexity. And rarely are American presidents travelling to the Middle East (a region where U.S. ideas and plans usually go to die) accorded as warm a reception as Trump’s in Saudi Arabia and Israel.

But even without the breathless revelations about Kushner, Russia and the secret back channel, using this trip to deflect attention from the administration’s domestic travails would have been a heavy lift. Presidents can use foreign policy to try to project power during a time of domestic difficulties. Nixon empowered Henry Kissinger to facilitate Arab-Israeli diplomacy in the wake of the 1973 October War; indeed, Kissinger brokered three disengagement agreements during the height of the Watergate scandal.

But that was then—there was an urgency generated by the war, and of course Nixon had Kissinger. Given the cruel and unforgiving world the United States now confronts, there are no short-term heroics abroad that could conceivably rescue the president. From North Korea to Syria to dealing with Putin, there are no obvious candidates for transformative diplomacy. In fact, some of these challenges have already created headaches and may add to Trump’s woes at home. The special counsel will be a long movie, and combined with congressional investigations, the continued drip of leaks inside the Beltway and few anticipated legislative achievements, changing the channel and compartmentalizing what may or may not become known as Russiagate will be mission impossible.

2. What was Really Accomplished in Saudi Arabia?

Less than meets the eye. Unsurprisingly, the president proclaimed his first stop in Saudi Arabia to be “historic.” But when you dig deeper, much of what was trumpeted is tentative and very much open to question. With sleight of hand, the White House included in the arms deal many weapons that the Obama administration had already agreed to sell. Trump boasted about the “jobs, jobs, jobs” that the Saudis will create in a $20 billion investment fund with the Blackstone Group on infrastructure in the United States.

Moreover, the Saudis, already armed to the teeth, do not need many of these weapons. Nor are they likely to use them as part of a new “Arab NATO”—which the Saudis have been talking about for years but was given the silent treatment during the trip—in the campaign against radical Islamist extremism. The kingdom and its Sunni Arab allies have contributed almost nothing to these operations, and it’s not because they do not have the military wherewithal. Instead, the point of throwing all that money at American defense contractors and the president was to buy influence in Washington and cement Trump’s allegiance to the Saudi agenda.

The president has returned from Saudi Arabia with a handful of promises about Saudi Arabia’s renewed determination to fight the threat of radical Islamist terrorism—which its own religious establishment has done so much to empower. It’s unlikely that the royal family will rein in the extremist teachings of this establishment, and it remains to be seen whether the Saudis and their Sunni allies will crack down on terrorist financing. But what is likely is that the assurances Trump offered, while sweeping under the rug the contribution of Saudi Arabia and some of its Sunni Arab friends to jihadist terrorism, will embolden the Saudis to be much more confrontational with Iran—even though they have few if any good options to roll back Tehran’s influence in the region, and will look to the United States to be the tip of this spear. In fact, not long after Trump was wheels up from Saudi Arabia, it was clear that Riyadh and its Sunni Arab partners thought they had been given a green light to crack down even more heavily on their domestic opponents (whom they often label as terrorists).

It’s OK to be used as long as you get something of equal or greater value in return, but transactional Trump got nothing that would advance U.S. priorities on Iran or counterterrorism. Instead, he has lashed the power and reputation of the United States to an autocratic regime’s anti-Iranian, anti-Shia and antidemocratic agenda. The Saudis took the president to the cleaners, largely by selling the narrative that the United States had abandoned its friends in the region and appeased its enemies—and that Iran is the root of all evil in the region. In reality, the Obama administration earned the wrath of the Saudis because it wouldn’t depose Assad for them, wouldn’t stop berating Arab autocrats for their awful human-rights abuses and wouldn’t abandon its efforts to denuclearize Iran to avoid another potentially devastating war in the region—in short, because the former president put American interests ahead of Saudi interests and dared to defend, however meekly at times, American values.

Indeed, what Trump demonstrated in kowtowing to Saudi Arabia was not strength but weakness. And by dancing (with or without swords) to the Saudi tune, he risks dragging this country into more quagmires like Yemen and inflaming sectarian conflict throughout the region, as well as the Saudi-Iranian grudge match for regional domination. So much for an America-first policy.

3. The Peace Process: Is There a There There?

Certainly not yet. That Trump is looking to the seemingly intractable Arab-Israeli conflict for some kind of diplomatic breakthrough is an ironic testament to how desperate his situation has become. There are, to be sure, new elements in the peace-process mix—a new and unpredictable president who’s clearly gotten the attention of the Arabs and Israel by toughening U.S. positions on Iran and by claiming to want to resolve the Israeli-Palestinian conflict, as well as a growing alignment between Israel and the Sunni Arabs, particularly in response to a rising Iran.

What is uncertain, and frankly dubious, is whether any of this is sufficient to overcome the obstacles that have prevented a breakthrough in the conflict these many years. One obstacle in particular comes to mind: the inability and unwillingness of Netanyahu and Abbas to make the decisions on core issues, such as Jerusalem, borders and security, that would allow a would-be mediator to bridge the gaps. Trump keeps talking about the “ultimate deal,” by which he means a final peace agreement. But there’s not a shred of empirical evidence (yet) that either Israel or the Palestinians are willing to do this.

What can be imagined is some kind of interim process in which Israelis and Palestinians take a series of mutually reciprocal and sequenced confidence-building measures—and, as they do, the Gulf states would reach out to Israel with gestures of their own, including overflights and expansion of telecommunication links. But even this is a stretch. Because even if the process starts, it’s unclear where it leads. Israeli and Palestinian conceptions of how to end the conflict are wildly divergent, and Trump has refused so far to endorse the basic premise of a two-state solution. Based on what we see now, never has a U.S. president expressed more confidence in a conflict-ending agreement with so little seeming prospect of achieving one.

Hardly. While in Europe, Trump acted like a bull who had brought his own china to the shop. Our European allies were aghast that Trump refused to reaffirm America’s security commitment to its NATO allies, and instead treated NATO heads of state to another Trumpian tongue-lashing on their inadequate defense spending. This myopic view, as many analysts have pointed out, is wrong on many levels.

The larger problem is that Trump approaches the transatlantic alliance and America’s responsibility to preserve peace, security and prosperity in Europe as another real-estate deal—and appears to believe that the United States is doing Europe a favor by defending it.

Our European allies are not building contractors or plumbers that he can stiff or bully and browbeat into submission, especially by a president who has given America two black eyes in Europe and is weak and unpopular at home; they are sovereign governments that have to deal with their own domestic publics and parliaments who do not write the kind of blank checks to their militaries that the United States signs for its own. America defends Europe, not out of charity, as Trump seems to believe, but because it is vital to American security to prevent a hostile country from establishing its hegemony over the region. And it is equally important to have partners that are prepared, as NATO and the EU have demonstrated over the years, to tackle global challenges in cooperation with the United States.