What Do America's Allies Think of 'America First'? 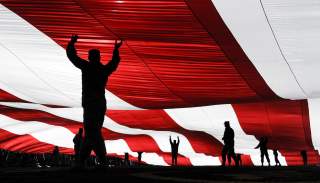 In the midst of increasing uncertainty over the strategic direction of the United States, President Donald J. Trump added a new wrinkle when he announced that Washington would be withdrawing from the Paris climate accord that was signed by over 190 nations in 2015. Predictably, international and domestic reaction was swift and vocal. European leaders expressed their disappointment and dismay, while the response at home only intensified the already-toxic political climate. When considered in isolation, leaving a nonbinding climate-change agreement is hardly the apocalyptic game changer that some alarmists have depicted. However, Trump’s Rose Garden announcement is the latest episode in a series of events that raises concerns about the continuation of the American-led international system that has served as the foundation for security and stability since the end of World War II.

In his first address to a joint session of Congress, Trump said, “My job is not to represent the world. My job is to represent the United States of America.” His speech alarmed many global leaders that are trying to understand the direction of U.S. foreign policy in the Trump era. National Security Advisor H. R. McMaster and National Economic Council director Gary Cohn recently coauthored Wall Street Journal op-ed, where they argued, “the world is not a ‘global community’ but an arena where nations, nongovernmental actors and businesses engage and compete for advantage.” The zero-sum nature of this passage implies that alliances and partnerships are transactional and ever-changing as circumstances and interests dictate. Such insights from the Trump administration’s brain trust help clarify the strategic thinking behind an ‘America First’ foreign policy that narrows and prioritizes U.S. national security and economic interests above other considerations.

Trump’s withdrawal announcement was scheduled for the week after returning from his first overseas trip, where he addressed the Arab Islamic American Summit in Riyadh and declared that the United States would adopt a “Principled Realism” based on common interests. In contrast to President Barack Obama’s 2009 Cairo speech, Trump avoided the sensitive issues of human rights and the promotion of democracy in his address. Unsurprisingly, his speech found a warm and receptive audience at the summit, where many countries are unable (or unwilling) to embrace U.S. or Western values but do share common economic and security interests. “Principled Realism” may also explain Trump’s decision to meet with Egypt’s President Abdel Fattah el-Sisi and Turkey’s President Recep Tayyip Erdoğan, despite domestic and international criticism regarding alleged human-rights abuses and authoritarianism.

After telling Arab leaders that “we are not here to lecture,” Trump took the opposite approach a few days later at the NATO summit where he publicly called on member states to contribute their “fair share” and “meet their financial obligations.” He (correctly) pointed out that only five of the now twenty-nine nations within the alliance—Montenegro is the newest NATO member—meet the goal of spending at least 2 percent of their gross domestic product (GDP) on defense. Although widely anticipated, Trump did not explicitly reaffirm America’s commitment to Article 5 of the treaty, whereby an attack against one allied state is an attack against all allied states. Charles Krauthammer lamented Trump’s omission because it risks undermining strategic deterrence in Europe. He argued that “if you’re going to berate, at least reassure as well. Especially given rising Russian threats and aggression.”

Trump’s visit fueled concerns that he is undertaking a fundamental realignment of American foreign policy where the United States is more comfortable working with autocrats than with its “traditional” allies and partners, while questioning the benefits of multilateralism. Leaders on the continent are scrambling to respond to this abrupt change in U.S. strategic direction and its implications for regional security and stability. After the G-7 summit in Italy, German chancellor Angela Merkel told a crowd at an election rally in Munich that “the era in which we could fully rely on others is over to some extent” and “we Europeans truly have to take our fate into our own hands” to “fight for our own future and destiny.”

Critics argue that Trump’s decision to withdraw from the Paris climate accord is a “gift” to Chinese president Xi Jinping. In addition to domestic pressure from its expanding middle class to reduce pollution, China is a major player in the clean energy sector and is projected to generate more than a quarter of its electricity from wind power by 2030. Beijing stands to reap economic benefits from the United States’ withdrawal from the climate-change agreement, which follows an earlier decision to abandon the twelve-nation Trans Pacific Partnership. Some countries that were involved in the TPP negotiations are now looking to join the Chinese-led Regional Comprehensive Economic Partnership, thus increasing its influence in the Asia-Pacific region. Sen. John McCain worries that cancelling the pact sends “a troubling signal of American disengagement in the Asia-Pacific region at a time we can least afford it.” By contrast, Beijing welcomed the decision as an opportunity to establish Chinese global economic leadership. Xi recently addressed the World Economic Forum in Davos, Switzerland and declared that “we must remain committed to free trade and investment. We must promote trade and investment liberalization.” Forbes contributor Kenneth Rapoza opines—with a sense of irony—that “China, governed by the Communist Party . . . is now the defacto leader of globalization.”

Moreover, China has found common ground with European leaders on the issue of climate change. Speaking alongside Chinese premier Li Keqiang the day after Trump’s announcement, European Council president Donald Tusk said, “We are convinced that yesterday's decision by the United States to leave the Paris agreement is a big mistake. . . . The fight against climate change, and all the research, innovation and technological progress it will bring, will continue, with or without the U.S.” Germany is fully committed to renewable energy; currently, 25 percent of its energy currently comes from renewable sources, and Chancellor Angela Merkel plans an increase to 40 percent by 2025. Meanwhile, newly elected French president Emmanuel Macron displayed his exasperation with the Trump withdrawal announcement by issuing a call to “make our planet great again” and encouraging “scientists, engineers, entrepreneurs and responsible citizens who were disappointed” by the withdrawal to make France their home.

Perhaps the greatest risk of an “America First” approach to foreign policy is that allies and partners follow suit by turning inward or seeking new security arrangements as they see the United States abrogating its global leadership responsibilities. In addition to increased ambiguity, such a development could impede existing and future collective security burden-sharing efforts. For example, Trump is currently considering whether to commit thousands of additional U.S. troops in Afghanistan and an important factor in the administration’s calculus is obtaining similar commitments from NATO and other partners. Unfortunately, his criticisms in Brussels and harsh rhetoric elsewhere make this a more difficult task to accomplish. Douglas E. Lute, a former ambassador to NATO who advised both Obama and President George W. Bush on Afghanistan, opines that “Trump has made it harder, not easier, to follow the U.S. lead. . . . Questioning U.S. leadership makes it more difficult for the allies to send troops into harm’s way.”

To be clear, we are in the early days of the Trump administration, and U.S. foreign policy is likely to evolve and mature going forward. At the recent Shangri-La Dialogue in Singapore, Secretary of Defense James Mattis encouraged nervous Asian allies and partners to “bear with us, once we’ve exhausted all possible alternatives, the Americans will do the right thing. We will still be there. We will be there with you.” However, Kori Schake argues that his remarks “were met with deep skepticism” because they appeared “at variance with the actions of the president.” While McMaster and Cohn contend that “America first doesn’t mean America alone,” the current level of international angst raises concerns that this premise may one day be put to the test.

Jim Cook is an Associate Professor of National Security Affairs at the U.S. Naval War College. The views expressed here are his own.