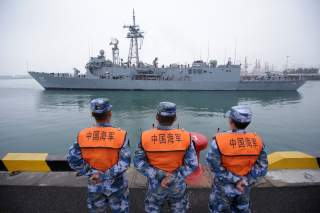 In April 2019, Secretary of State Mike Pompeo surprised many by using his appearance at the Arctic Council to talk about the looming threat of China in the Arctic. That apparently astonished many other participants, who were more eager to talk about the ever more apparent crisis of climate change. Some may have wished to discuss Russia’s increasingly bellicose disposition in the region (and related environmental risks), but Pompeo remonstrated on the alleged Chinese menace.

As it was recently noted in this space, the proposition of a threatening Chinese military presence in the Arctic is not completely ridiculous, and could be a troubling outgrowth of the ever increasing Russia-China quasi-alliance. Nevertheless, at present, a regular Chinese military presence in the Arctic remains a very low probability. The much graver “threat” would be if Chinese corporations moved aggressively into the delicate region, looking to reap the rewards of the now rapid melt underway. Several successive announcements from 2018, including that Beijing was officially embracing the “Polar Silk Road” concept and had committed to a nuclear ice-breaker program, have stoked such concerns.

Yet a much greater issue for the foreseeable future than any kind of Chinese militarization of the Arctic—which Russia would likely strongly oppose anyhow—is the potential for the reckless endangerment of the region’s delicate ecosystems by Chinese companies eager to make easy profits exploiting untapped natural resources. Already, many Russians are speaking up about the unrestricted growth of China’s logging industry in Siberia. Similarly poorly regulated and monitored practices could wreak havoc on Arctic fisheries—one of the last nearly pristine havens for aquatic life on Earth and home to myriad unique species. This edition of Dragon Eye examines a Mandarin-language survey of the possibilities for polar fishing by two Chinese fisheries researchers. The focus of the piece is on the key indicator of polar-class fishing craft and was published in an early 2019 edition of China Ship Inspection [中国海检], a magazine published by the China Classification Society.

At the outset of the analysis, the authors explain the rationale for their study. It is stated: “… against the backdrop of the decline of fisheries world-wide, the possibility to develop Arctic fisheries resources, and their unrealized potential has attracted high level attention in the relevant countries [在全球海洋渔业资源衰退的大背景下, 极地渔业资源的开发成为可能, 其潜在的渔业资源正引起着有关国家的高度关注].” It is noted that numerous constraints, not least the sea ice and the great distances from traditional fishing bases, as well as a paucity of good estimates on Arctic fish populations, imply that “a responsible structure to cooperatively develop and protect fisheries resources remains unclear” for the Arctic Ocean.

The article explains that Chinese fishing activities in the Antarctic, by contrast, are already quite well developed. Since national activities in the Antarctic are generally governed by the Antarctic Treaty, these Chinese fisheries experts assert this is a situation of “rules are in place, and therefore one may harvest [有法可农]” the relevant resources – in this case mainly Antarctic krill [南极磷虾]. Under an initiative apparently begun in 1984, China became an official member of the CCAMLR [Commission for the Conservation of Antarctic Marine Living Resources] Accord, which governs all fishing activities in the Antarctic, in 2007. Perhaps owing to the symbolic meaning of this catch for Beijing, it attained the status, according to this report, as an “important strategic plan,” in so far as it is “an effective method to guard … [China’s] maritime rights and interests.” Antarctic krill fishery boats are thus said to be part of the national “Made in China 2025” economic development plan.

More than just talk, this Chinese report claims that Beijing is delivering “breakthrough results” [突破性的成果] for its commitment to Antarctic fishing. Operating under CCAMLR rules, characterized here as the world’s most regulated fishery, China now operates more boats (four) than any other country. According to this report, South Korea and Norway each operate three boats, while Chile and Ukraine operate one boat apiece. The researchers report that Chinese boats have expanded their fishing areas in Antarctic seas and have critically increased the seasonal durability, from two months of fishing to nine. It is reported that eleven large Chinese fishing vessels are now capable of the arduous and lengthy mission. These special ships are apparently based in Liaoning, Shandong and Shanghai.

However, problems remain and this Chinese analysis suggests that the Chinese ships in the Antarctic krill fishery have just one-third the take of Norway (as reported for 2014). These inefficiencies are partially blamed on ships that are predominantly second-hand. Thus, these researchers announce with evident pride that a new fishing ship designed and built in China specifically for the Antarctic krill fishery was completed by China in August 2018. According to this rendering, this new ship called “Deep Blue [深蓝]” is the “largest long-distance” fishing vessel that China is now building and is packed with the “most modern equipment.” This analysis projects that the “Deep Blue” new Antarctic krill fisheries boat “represents the flag ship type for high end fishing boats and will play a significant role in the development of the health of the nation’s long distance fishing industry and also of China as a formidable maritime power [为代表的旗舰试高端渔船的建造将为我国远洋渔业的健康发展及我国建海洋强国发挥重要的作用].

Without exaggerating China’s ambitions in the Arctic, one can nevertheless easily see that decades of gradual development of the Antarctic fishery has prepared Beijing well if and when it becomes possible to fish regularly in the “High North” as well. The article states that the International Maritime Organization (IMO) has recently taken a hard look at how shipping needs to be regulated in the delicate Arctic domain, and is now evaluating regulations for Arctic fishing. It is duly noted that there is a “tendency toward the ever stricter responsibility to protect the environment [环保责任日趋严格化].”

A major recommendation of the Chinese study is that Beijing should invest heavily in fisheries research ships. The authors emphasize that other major maritime powers all have large fleets of fisheries-related research vessels. It is reported that the United States has nineteen such vessels, South Korea has twelve, and Japan has forty-two. Needless to say, these authors contend that some of China’s new fisheries research vessels should be ice-capable. Another recommendation is that China’s fishing fleet should “… completely draw lessons from the leading Arctic shipping technology countries Norway, Finland and Sweden … [充分借鉴挪威芬兰瑞典等极地船舶技术领先国家].” It also calls upon Chinese to “break the monopoly position” of the Scandinavian countries with respect to Arctic fishing innovations, including with respect to the safety and environmental aspects.

It’s a fair bet that most American national security specialists are not especially concerned about Chinese fishing in the Arctic. Yet, ultimately these fishing vessels could be more threatening to the fragile Arctic than any Chinese warships that might deploy to the region. Indeed, the former scenario is also rather more likely than the latter. The hints offered by this Chinese article do imply that Chinese fishing in the Arctic regions needs to be watched closely, along with the fishing activities of all other polar fishing aspirants too.

At the present, there is indeed some preliminary evidence to suggest that as it goes about unfurling its wings across all the world’s oceans, Beijing seems willing to play by crucial regional rule sets, such as CCAMLR. Nevertheless, this case should be monitored extensively to see if Beijing has really internalized the obvious imperative to protect the global environment, including through the adoption of genuinely sustainable fisheries practices.