What Does China Want in Djibouti? 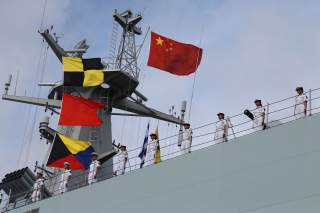 China’s base in Djibouti continues to make headlines. In late November, the People’s Liberation Army (PLA) garrison there conducted its second live-fire exercise, the first having been conducted in September. This second exercise also coincided with Djiboutian President Ismail Omar Guelleh’s three-day visit to Beijing, where he and Chinese President Xi Jinping reportedly discussed both China’s military facilities in the country while also reaching an agreement to provide Djibouti with additional loans for further infrastructure construction. Meanwhile, plans for a pier at the base housing the garrison, which would allow it to support PLA Navy ships independent of the adjacent Doraleh Multipurpose Port, as well as construction of a 400 meter helipad, continue to move forward.

While the evolution of China’s base in Djibouti continues to receive significant attention, very little has been written about the officer responsible for overseeing this process on the ground: PLA Navy Senior Captain Liang Yang. Aside from a few brief quotes from the senior captain following China’s live-fire exercises in the country, he has largely stayed out of the Western press.

Who is Senior Captain Liang Yang? Why was he chosen for this position? What can his background and career experience tell us about how China views the challenges of operating in Djibouti and the PLA Navy’s role in facing those challenges? As China’s presence in Djibouti continues to evolve, it will likely turn to its military, particularly its navy, to play multiple roles. Operationally, China’s navy will need to execute its primary responsibilities: carrying out China’s “far seas protection” operations, including maintaining access to sea lines of communication for trade and energy imports; protecting China’s assets and personnel abroad; supporting counter-piracy operations; and preparing to conduct humanitarian assistance and disaster relief efforts should the need arise.

Yet operating in Djibouti creates a whole new set of diplomatic challenges as well, as China’s military contingent will have to manage issues that arise when introducing another military actor into an already crowded space while at the same time assuaging growing concerns about Chinese intentions in the region. In many ways, these challenges in Djibouti mirror the larger issues that China faces as the PLA becomes increasingly active abroad. First and foremost, it remains tasked with protecting China’s national security interests. Diplomatically, however, it must also manage the sensitivities that will inevitably arise between China and regional actors, or risk undermining its broader national interests.

To achieve these two objectives, the PLA Navy will need to identify and promote naval officers that have a mix of both operational and diplomatic experience—individuals such as Senior Captain Liang. With this in mind, it may be worth examining in some detail the military career of China’s first-ever overseas base commander, in order to gain some insight into the qualities the Chinese navy is seeking for its officers as it manages these challenges.

As articulated in the 2015 national defense white paper, China’s new naval strategy of “Near Seas Defense, Far Seas Protection” fundamentally consists of two components. Closer to home, the Chinese navy remains tasked with protecting Chinese sovereignty and territorial claims, maintaining credible strategic and conventional military deterrence, and conducting joint operations in the maritime domain. Further abroad, China has, over the past decade, experienced a tremendous growth in assets and personnel in places such as Africa and the Middle East. Moreover, China remains reliant on maritime trade routes to conduct foreign trade and obtain energy imports. As a result, the PLA Navy has been tasked with protecting these interests through the execution of “far seas protection” operations, and just as Djibouti’s location along the Bab-el Mandab strait makes it well positioned to support China’s “far seas protection” operations, Liang Yang’s experience appears to make him well-suited to leading that effort.

First, Senior Captain Liang has a wealth of operational experience. From 2006–2010, he served as a deputy commander aboard the PLA Navy guided missile destroyer Hefei. In March 2010, he was named commanding officer (CO) of the PLAN Frigate Changzhou, which a PRC Ministry of National Defense spokesperson referred to at the time as “China’s most advanced frigate.” Most recently, Liang came to Djibouti after having served as one of four deputy directors of the PLA Navy Headquarters’ Operations Department in Beijing.

Liang has operational experience within the region as well. In 2012 during his tour as CO of the Changzhou, he commanded the ship as part of China’s twelfth counter piracy escort flotilla in the Gulf of Aden. During that tour, his ship was involved in the rescue of twenty-six Taiwanese fishermen who had been held hostage in the region for over a year. As a result, he was named one of China’s 2012 “Maritime Men of the Year” recipients. Given that China’s Ministry of Foreign Affairs has already stated that the base will be used to support China’s anti-piracy operations and humanitarian assistance missions in the region, Senior Captain Liang’s operational experience within the region makes him well-suited to carrying out these tasks.

Of growing importance however, will be the need for diplomatic skills that will allow China’s new base commander to successfully engage with the myriad of other foreign militaries operating in Djibouti, as well as the Djiboutian host government and regional militaries. Bustling with military activity, Djibouti is rapidly becoming a modern day Casablanca. In addition to the PRC, Djibouti plays host to militaries from six other countries, including the United States, France, Germany, Italy, Japan and Spain. Saudi Arabia is also finalizing an agreement allowing it to establish a military presence in the country, bringing the total number of foreign militaries to eight. A country the size of New Jersey, Djibouti has multiple foreign military installations all operating at close quarters. China’s new base near the Dorelah Multipurpose Port is only a few miles from Camp Lemonnier, home to U.S. Africa Command’s Joint Task Force for the Horn of Africa and France’s Chabelley airfield, which holds facilities used by the U.S. Air Force. With so many different militaries operating in such tight quarters, China’s new base commander will require the skills to manage issues that arise between them, such as the recent allegations that Chinese personnel had used the French-run firing range range outside of their scheduled time.

Foreign militaries aside, China will also likely want to remain on good terms with its new host country. China has become Djibouti’s largest provider of capital for its ambitious infrastructure development program, providing roughly $1.34 billion to help finance roads, rails, ports, pipelines and real estate construction. While such dollar diplomacy has done much to develop relations, not all in China-Djibouti relations have gone smoothly. Previously, the cash strapped Djiboutian government was unable to come up with its share of the funding for the Djibouti-Ethiopia railroad ($58 million), and had to sell a 10 percent stake in the Djibouti-Ethiopia joint venture company that will oversee the railroad to the state-owned China Civil Engineering Construction Corporation. In October 2017 the Djiboutian government announced that it was retendering contracts that had previously been awarded to China Civil Engineering for the construction of two airports. Meanwhile, reports of illegal Chinese fishing in Djiboutian waters continue to surface.

To address these challenges, Senior Captain Liang will have to rely on a set of diplomatic skills he has developed through years of engaging with foreign militaries and working in public affairs. For example, prior to his posting in Djibouti, Senior Captain Liang was also dual-hatted in PLA Navy Headquarters in Beijing, working both as a deputy director of the Operations Department and as one of the PLA Navy’s first-ever spokesman. From 2004 to 2006, he was stationed in the region working in Liberia as one of China’s United Nations military observers, where he traveled through thirty-one different countries in the region during his two-year tour. He has worked closely with foreign naval personnel as well, having participated in China’s planning for both the China-Russia bilateral naval exercise Maritime Cooperation, as well as China’s participation in the U.S.-led Rim of the Pacific (RIMPAC) exercise in 2016. Both these exercises—which require being able to communicate, negotiate, and in the end, cooperate, with foreign navies—should serve him well as he begins to engage with the many and varied foreign military actors all operating in close quarters in Djibouti.

As China’s global military presence continues to expand, Djibouti won’t be the last place where China’s navy will be in need of senior officers that can both conduct military diplomacy and execute their operational responsibilities. Already, China has over 1,700 peacekeeping troops in Africa, many of which are located in nearby Sudan, and has recently made another 8,000 personnel available for future missions. In August of this year, the navy’s twenty-seventh escort task force set sail from the island of Hainan to continue conducting counter piracy operations in the Gulf of Aden, and with its base in Djibouti, the PLA now has a permanent foreign military installation through which it can rotate Chinese military officers and personnel to provide them experience operating abroad. Going forward, officers with backgrounds like Senior Captain Liang will likely be in high demand, as China’s military looks for personnel who can help address these dual operational and diplomatic challenges.