What Does the Manafort Plea Mean for Trump? 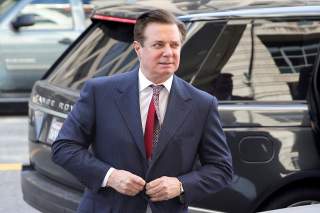 Alan Dershowitz is right. The guilty plea today by Paul Manafort is a “big win” for Robert Mueller that should alarm Donald Trump. Trump has said previously that he doesn’t like flippers, but Manafort has clearly flipped. His agreement is sweeping: “any and all matters as to what the Government deems the cooperation relevant.”

The key question will be what Manafort actually can tell Mueller and his associates. He was engaged in money laundering even as he was campaign chairman for Trump and for many years he was clearly involved in numerous activities in Ukraine, including the audacious gambit of trying to “put pressure” on what he apparently called “Obama jews”—Obama administration officials. To accomplish this goal, he hoped to spread the allegation of anti-Semitism against former Ukrainian prime minister Yulia Tymoshenko, a maneuver that was supposed to bolster the standing in Washington of Ukrainian president Viktor Yanukovych.

Writing in the Atlantic, Franklin Foer, who has dived deeply into Manafort’s past career, says that he never put much stock in the rumors swirling around the June 9, 2016, Trump Tower meeting with Russian lawyer Natalia Veselnitskaya, but that Manafort may be able to shed light on the shadowy activities of figures such as Roger Stone: “Manafort’s friendship with Stone traces back to the 1970s, when Manafort managed Stone’s campaign to run the Young Republicans group. During the eighties, they became business partners and created a legendary consulting firm together. If Mueller does intend to pursue a case against Stone, he suddenly has [his] oldest confidant as a cooperating witness.”

Another danger for Trump is that the Manafort deal will prompt others to sing to Mueller. Vanity Fair reports that former Trump lawyer Michael Cohen is talking to investigators: “he has bristled at the feeling that he has taken the fall for a man who has refused to take any responsibility or face any consequence himself. In conversations with Mueller’s team, he is making good on what he told ABC earlier this summer: that his loyalty to Trump is no longer his lodestar.” For now, Manafort has agreed to cough up close to $50 million to the feds in penalties, enough, incidentally, to pay for the Mueller investigation’s activities for several years. The only thing the agreement appears to lack is a pledge by Manafort to conduct the members of the prosecution team to his favorite tailors.

According to White House press secretary Sarah Huckabee Sanders, “This had absolutely nothing to do with the President or his victorious 2016 Presidential campaign. It is totally unrelated.” Trump himself has tried to downplay the role that Manafort played during his 2016 campaign. But as Newt Gingrich observed on August 19, 2016, on Fox News: “Nobody should underestimate how much Paul Manafort did to really help get this campaign to where it is right now.”

But Trump is not out of options. He could make a variety of moves. One is to do nothing. This would suggest that Trump truly means what he says: Manafort was a bit player who has nothing of significance to convey to Mueller. Given that Manafort and Trump have enjoyed an association, in one form or another, since the 1980s, it seems most improbable. But it cannot be ruled out. Another option would be to pardon Manafort immediately. In this scenario, Manafort, in vowing to cooperate with the prosecution, would be seeking to force Trump’s hand on the issue of a pardon. Or Trump could be to fire both Attorney General Jeff Sessions and Deputy Attorney General Rod Rosenstein, which would give him the ability to instruct the Justice Department to terminate the Mueller investigation immediately. A longer-term option would be to continue to explore the possibility of a self-pardon. Any move that Trump takes to go on the offensive will come with high political costs. But he may decide that the price of doing nothing is even higher than acting to protect himself and his family.

One thing is certain: the ugly tone in Washington is about to get a lot uglier. Democrats are targeting Supreme Justice nominee Brett Kavanaugh with rape allegations dating to high school. The New York Times has just had to apologize for an idiotic piece about UN ambassador Nikki Haley that suggested she was spending a fortune on curtains for her residence when, in fact, the decision to purchase them was made during the Obama administration in 2016. All of this is a sideshow, however, to the fireworks that may erupt after the November midterm elections, when Democrats may well be in control of both the House and Senate, and in a position to launch a battery of investigations about Trump administration malfeasance.

For the neocons who have been displaced by the Trump takeover of the GOP, hope is springing eternal. They’re plotting to return from the wilderness. Thus neocon thinker Bill Kristol is seeking to form a guerrilla movement that would try to take on Donald Trump in the 2020 Republican primary. The aspiration is to be ready to move if Trump is ousted from the presidency.

Whether any of this will be enough to topple Trump, who has repeatedly flirted with disaster, only to stage a rousing comeback, is an open question. But the battle-lines aren’t simply being drawn in Washington. The war over the future of the Trump administration is already being waged.