What Donald Trump Can Learn from Dunkirk 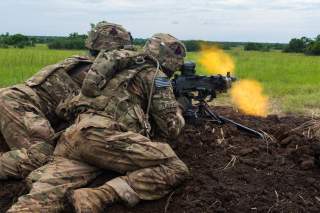 President Trump understands that American society is above all the idea it forms of itself. Trump’s grasp of this truth explains his determination to nurture America’s competitive national spirit, and expunge the self-loathing of the last decade. However, restoring American military power will take more than expressions of confidence in America’s military. President Trump must make important strategic choices and make them soon.

Christopher Nolan’s stunning new movie, Dunkirk, is a cautionary tale. The movie’s theme is one of hope and courage, but the more important meaning of Britain’s strategic defeat in 1940 is lost: The British waited too long to make the hard strategic choices.

In the months leading up to Britain’s disastrous defeat in May 1940, the British public was deluged with reports from their leaders and the press of the invincible power of the British Armed Forces. In the words of B. H. Liddell Hart, “Never did so many boast about so little.”

Two weeks and two days after the German offensive began more than 350,000 British and French troops (not all fighting men) had abandoned their equipment and waited for evacuation to England. In London, the myth that the British Expeditionary Force’s (BEF) defeat on the continent was due to Germany’s superiority of numbers spread quickly. It was a lie.

Germany’s victory was achieved by the rapid and deep penetration of at most 8 percent of the German Army: ten armored divisions, or roughly 150,000 troops. In addition, in all but a few isolated actions, the German soldier routinely out-fought his British, French, Belgian and Dutch opponents.

How and why did this debacle occur?

From 1920 until 1938, the British government and its senior military leaders could not agree on the British Army’s strategic purpose. A future British victory against an existential military threat from Germany or the Soviet Union was always hostage to the defense of Britain’s Empire in Asia, Africa and the Middle East. Until 1938 no one in London was prepared to make that choice. Worse, none of the army’s civilian ministers (secretaries of the army) had the stomach for a confrontation with the army’s conservative leadership, the generals that in Prime Minister Neville Chamberlain’s words clung tenaciously to “obsolete methods.”

When informed in January 1940 that the Germans had ten armored divisions poised for attack in the west, General Gort, the British Expeditionary Force’s commander-in-chief, said, “In that case, we haven’t an earthly chance.” Gort was right.

The Fifth Division BEF was an infantry-centric force with one armored division that, in 1939, “was still more of an aspiration than a reality.” When the Germans attacked, the most that the BEF’s infantry divisions could do was to fall back or be crushed by an aggressive, daring and mobile armored German enemy.

A coherent national military strategy that included preparations for British Army ground forces to fight against existential threats to Britain in Europe could have make all the difference, but it did not emerge until the German and Soviet Armies conquered and occupied Poland. When London finally acknowledged what was strategically vital—victory on the European continent—from what was marginally important—defending the Empire against weak, insurgent enemies without armies, air forces or naval power—it was too late.

Like the British Army during most of the interwar period, U.S. Army modernization is now constrained by the deployment of two hundred thousand soldiers to forty countries across Asia, Africa, the Middle East and Europe. The force is overstretched and worn out.

The army leadership’s answer is a modernization program that simply re-equips the Cold War Army’s World War II formations with upgraded versions of old tanks, artillery and infantry fighting vehicles inside the old brigade organizations. It’s tantamount to expecting that a refurbished Ford from 1975 with a GPS attached to the rear view mirror will perform like a Tesla.

Twenty years ago, when the railgun was only ten years away from fielding, the army’s leadership insisted that army tactics, doctrine and organization could not change until railguns arrived. The generals’ ploy worked. Nothing changed. Today, the army’s senior leadership is employing the same tactic.

For anything to change for the better inside the army, President Trump must do what the British did not do. He must decide what’s most important: the piece-meal commitment of tens of thousands of soldiers around the world or the reform and modernization of the U.S. Army.

No amount of British air or naval power could have rescued the British Army in France from defeat. The same holds true for today’s U.S. Army, a force that has not fought a capable nation-state opponent for more than two decades.

The U.S. Army cannot do everything, but it must modernize and prepare for a different future. President Trump, it’s time for strategic choices.

Col. (ret) Douglas Macgregor is a decorated combat veteran, a PhD and the author of five books. His most recent book is Margin of Victory.