What to Expect From India’s G20 Presidency 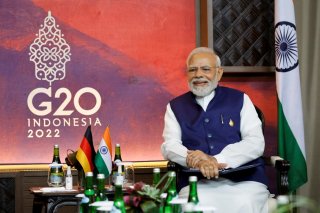 As the clock winds down on Indonesia’s 2022 G20 Presidency, the seventeenth overall, a transition is taking place as India assumes the role for 2023. Indian Prime Minister Narendra Modi’s government has already unveiled the theme for its presidency, “Vasudhaiva Kutumbakam” or “One Earth One Family One Future,” indicative of an environmentally-conscious approach. India’s approach will revolve around several key thematic areas, including sustainable growth, digital infrastructure, climate finance, food security, green energy, and combating transnational crime. Some of these thematic areas will prove consequential in New Delhi’s ability to make a mark at the world stage, but they will also pose unique challenges.

India's G20 presidency looks to focus on issues such as green development, lifestyle for environment (LiFE), digital transformation, inclusive growth, the need for reformed twenty-first-century institutions, and more importantly, a greater voice for the Global South in issues of international economic cooperation On all these concerns, the incoming G20 Troika comprising Indonesia, Brazil, and India seem to be apt partners.

During its presidency, India is likely to focus on issues that can provide opportunities for capacity building and leadership, including food and energy security. India’s emphasis on the urgent need to achieve peace in Ukraine is intrinsically tied to its global vision as well as its energy needs. During the COVID-19 pandemic, India proved its capability to provide food grains and medicine to the world. At the institutional level, it will look to the G20 to seek greater inclusivity, while still seeking support from other members of the G20 on external factors such as the resilience of supply chains for sustaining the usefulness of its capacity in crises.

Another focus area of its G20 leadership year will be digital technology. Domestically, it seeks to increase the use, reach, and productivity of digital technology in health, citizen participation, and government outreach in services. Externally, the use of digital technology could boost India’s global governance architecture, expand exports, and extend capacities like medical diplomacy to continents like Africa and Latin America.

At the heart of India’s G20 strategy lies reforming multilateral institutions, to which its leadership of the G20 provides a stepping stone. All G4 members are also part of the G20 through which they will be looking at expanding the scope of reformed multilateralism. India has a chance to push the envelope during its leadership by building a firmer Global South consensus. Here again, the role of the incoming Troika could prove critical.

India has already taken a few steps to sync its objectives as the G20 president with purposeful leadership. Modi’s launch of the LiFE initiative, along with the United Nations (UN) head in Kevadia,Gujrat this October was a step to support India’s climate leadership and national green goals. Despite these steps, India’s climate change leadership will be as much of a test as it will be an opportunity. The most recent UN Intergovernmental Panel on Climate Change (IPCC) report warned that India will likely face climate-related disasters over the course of the next two decades. A report earlier this year presented a bleak picture: India is reportedly at risk of 35 million people being affected by annual coastal flooding, and 40 percent of the population living with chronic water scarcity by 2050. India must corral the world’s wealthiest nations to reduce greenhouse gasses dramatically before 2030 or it will force India and developing nations to turn immediately to disaster and climate adaptation strategies rather than mitigation and prevention ones.

The problem for India is its habit of sending mixed messages. At COP26 in Scotland last year, Modi announced that India would attempt to zero carbon emissions by 2070. At first glance that was surprising and welcomed by many. But later, as India submitted its nationally-determined contributions  (NDCs) to the United Nations, disappointment set in. While there are two targets for 2030, which include reducing emissions per unit of GDP by 45 percent and increasing solar, wind, nuclear, and hydropower to half of India’s capacity, rapidly growing economies like India’s, can both reduce emissions per share of GDP and still increase overall emissions.

A 2021 study showed that of G20 states, just India and Indonesia have a “fair share” (of emission reduction) range that is higher in 2030 than their 2010 emissions, while India has a range higher than its present level. The problem is that to reach the 1.5-degree threshold set by the Paris Agreement, global emissions will need to be well below the 2010 levels. With so many G20 states increasing emissions over the 2010 levels, the pressure is on India to push G20 countries back to the Paris-negotiated mark. While India has been praised for being the only G20 country to achieve climate mitigation targets without external help, it will need to push developed countries to assist developing countries to advance financing and mitigation efforts, while becoming a model for developing economies to follow.

Food security presents another challenge for India. Food security is a grave concern for the world considering advancing climate change-related threats, aggravated by the near-term challenges posed by the ongoing war in Ukraine. Although India has demonstrated how it moved from a “food-deficit” country to a “food-surplus” country, it is conscious that external challenges could threaten or undo this transition very rapidly. While India is food sufficient, the World Food Programme notes that India has large numbers of its population living in abject poverty and being extremely food insecure, with more than 21 percent living on less than $1.90 per day. As such, India’s insistence at the Bali Summit this year on talking about food security in the same breath as fertilizer security is understandable. As Modi said at this year’s G20, today’s fertilizer crisis is tomorrow’s food crisis.

The more immediate challenge for India, however, will be to prevent the G20—fundamentally a geo-economic body—from becoming a geopolitical one. Its leadership comes at an inflection point of the country’s rise, as the fifth-largest economy in the world earlier this year, is poised to become the fourth-largest by 2025-26. These challenges in unison will present India with an array of critical challenges and unique opportunities as it begins its G20 Presidency starting December 1.

Mark S. Cogan is Associate Professor of Peace and Conflict Studies at Kansai Gaidai University in Osaka, Japan. He is a former communications specialist with the United Nations in Southeast Asia, Sub-Saharan Africa, and the Middle East.

Vivek Mishra is a Fellow with ORF’s Strategic Studies Programme. His research interests include America in the Indian Ocean and Indo-Pacific and Asia-Pacific regions, particularly the role of the US in security in South Asia, Indo-US defense relations, and the Indian defense sector.