What Explains the Ferocity of the Attack Against Donald Trump 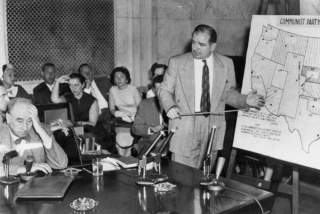 Just days after Alsop’s third installment appeared, McCarthy stepped into the breach with his now-famous inflammatory speech at Wheeling, West Virginia, in which he decried the existence of 205 or 57 communists (his precise stated number was later disputed) in the State Department. That unleashed the McCarthy era, characterized by, first, a frenzy to root out communists from government (and later from other walks of life); and, second, by a progressive erosion in the standards of proof that previously had been viewed as necessary for the kinds of allegations that McCarthy tossed around so promiscuously.

That erosion in standards of proof lay at the heart of McCarthyism. When an ex-communist-turned-red-hunter named Louis Budenz testified before the McCarthyite McCarran subcommittee of the Senate Judiciary Committee and identified China hand John Carter Vincent as a onetime member of the Communist Party, Alsop perked up. Budenz had testified earlier without issuing such an accusation against Vincent. More significantly, Alsop had been involved when Vincent, traveling through China with Vice President Henry Wallace during World War II, had helped Wallace draft a memo to Franklin Roosevelt recommending the dismissal of America’s top military man in China, Joseph Stilwell.

Stilwell hated Chiang Kai-shek and couldn’t get along with him at all. In his naivete, he considered Mao’s communists just the ticket for China’s stability and modernity, and he worked to undermine Chiang at every turn while bolstering Mao for the internal struggle sure to emerge between the two men at war’s end. Thus Stilwell, though not a communist, was serving the Communist cause. And Vincent, now in McCarthy’s crosshairs, had worked to get Stilwell fired, hardly the actions of a Communist Party member.

Alsop asked to testify before the McCarran subcommittee on the matter and got Wallace to do the same. This was a dangerous endeavor for both men, given that the committee surely would seek to ensnare them in perjury traps. It was particularly dangerous for Wallace, a muddle-headed liberal who harbored sympathetic views toward the Soviet Union. But they got through their testimony and managed to nullify the Budenz accusation.

In the end, that gave Vincent merely a temporary reprieve from the pressures of McCarthyism, and he was forced out of the State Department two years later. With impressive agility, Budenz and others altered their story: the real point, they now said, wasn’t whether the communists liked Stilwell but rather their position on his removal. The Kremlin had had advance notice of his likely recall, the new story went, and hence official instructions to party sympathizers were to acquiesce in that policy.

WAS VINCENT a communist? The question was never answered definitively, in part because of the difficulty in proving a negative. But the key matter was standards of proof. The erosion in that hallmark of evenhanded justice was what allowed McCarthy to spread his havoc over the next four years.

And standards of proof certainly went out the window in the Trump collusion frenzy. Not only the government figures noted above but many journalists and commentators, cable news talking heads, editors and writers for major publications, Democratic members of Congress: all assumed the worst and spread the nasty word with abandon, absent any serious proof. After Mueller dispelled the notion of Trump collusion, John Brennan stepped up and acknowledged that he had been operating perhaps on the basis of “bad information.” He added: “I am relieved that it’s been determined there was not a criminal conspiracy with the Russian government over our election.” But he certainly hadn’t refrained from his accusatory zeal pending that outcome, which translates into a view that Trump was guilty at the bar of public discourse until proven otherwise. And even after the Mueller report many other anti-Trump figures eschewed the Brennan approach and took the Budenz route, merely altering the story to keep the accusation stream flowing. It’s a case of plus ca change if there ever was one.