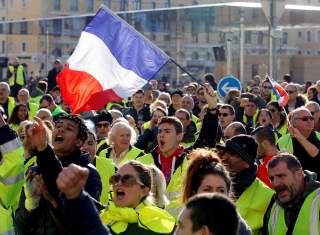 France is suffering from a round of public discontent in the form of the “Yellow Vests” (gilets jaunes), a spontaneous and generally leaderless wave of demonstrations and riots springing from the country’s rural areas and small-towns. Beginning in November, people showed up in large numbers to protest a green-friendly tax on gas and diesel fuels to discourage the use of automobiles and trucks. It was estimated by the Interior Ministry that on December 2nd close to 136,000 people took to the streets, up from the previous weekend’s showing of 105,000. Although the Macron government on December 3rd announced it was postponing the fuel tax rises for six months, the Yellow Vests are not done. Indeed, there are growing concerns that the movement can bring the economy to a halt, force political changes and factor in the European Union’s May 2019 European Union parliamentary elections.

The immediate cause of the Yellow Vest movement was increased taxes on diesel, which is widely used in France. Over the past twelve months the price of diesel has climbed by 23 percent to an average of $1.71 per liter, its highest point since the early 2000s. Although some of that rise can be attributed to rising international oil prices (which have recently gone back down), the Macron government increased its hydrocarbon tax in 2018 by 7.6 cents per liter on diesel and 3.9 cents on petrol. Most recently, the government announced plans to raise those taxes further starting on January 1, 2019. President Emmanuel Macron touted this as part of the country’s ecological transition.

The problem for President Macron is that the French public is already angry at what many perceive as poor governance; a distance between the political elite and citizens; a lack of transparency over government spending; and high taxes that fail to translate into good public services. There is also resentment over the scrapping of a wealth tax on the rich and tax breaks for business. Simply stated, part of France, generally speaking much of the lower middle and working classes, feel as though they are being left behind and are now standing up for their rights. The squeeze for many is that their incomes are too high to qualify for social benefits yet too low to make ends meet. As one demonstrator in Paris stated to the Financial Times (November 26, 2018) “There are too many increases: the CSG (social security charges) for the retirees, the gasoline increase. The president does not listen to the people. He takes money from small workers and retirees and distributes it to the rich.”

The Macron government has sought to restructure state finances, which the previous Hollande government (2012-2017) had left in poor shape. While many French have become dependent on the state for social programs, it has left France with one of the highest levels of general government spending to GDP among advanced economies, which according to the Organization for Economic Cooperation and Development (OECD) was 56.6 percent of GDP. Only Finland has a higher level of state spending at 57.1 percent. In Germany, government spending to GDP is 43.8 percent, in Italy 50.2 percent, Japan 39.2 percent and the United States 37.4 percent. While the spending is not sustainable and contributes to France’s heavy debt load (equal to over 125 percent of GDP according to the OECD), cutting it is not easy and resented.

Once people began reaching for the Yellow Vests, which they are mandated by law to have in their cars in case of a breakdown, the movement rapidly snowballed into a broader protest movement.  The Yellow Vests are blocking access to a major fuel depot in the port of Fos-sur-Mer, near Marseille (one of the country’s largest ports) and petrol stations across the country are beginning to become short on fuel. Restrictions were also implemented in Brittany on the amount of gasoline motorists are allowed to buy. In the French overseas department of Reunion (located in the Indian Ocean) protests over fuel tax increases led to looting and rioting in November, forcing the deployment of troops to restore calm. And anyone driving through France on a major highway is likely to find themselves caught by cars or trucks moving at a slow pace or having to pass through groups of protesters at toll booths. As one observer noted, “They are ordinary people, like your mom or dad, manning the lines.”

The government’s response was to initially hold firm in the face of the nationwide demonstrations, while Macron addressed the country explaining the need of France to move away from fossil fuels and be more environmentally friendly (which did not go over terribly well). Macron also sought to pin the blame for the protests on ultra-right gangs and Marine Le Pen’s National Rally, formerly the National Front. However, Le Pen was very clear that the movement, in particular its more violent manifestations, were not called for by her organization.

What comes next? Macron has backtracked on the taxes and could try to adjust fiscal spending priorities, not an easy process considering the French president has sought to keep the fiscal deficit below 3.0 percent of GDP (a target agreed upon by all EU members). At the same time, President Macron has been strongly opposed to Italy’s attempt to stimulate its economy by greater state spending (which would widen that country’s the fiscal deficit to 2.4 percent from 1.8 percent in 2018).

If President Macron gives ground on France’s fiscal deficit, then Macron’s high ground against Italy’s populist government’s stimulus plan looks hypocritical, something that would factor into the May 2019 elections, which are shaping up to be a battle between pro-European Union parties, led by Macron and others, against populist-nationalists, led by Hungary’s prime minister Viktor Orban and Italy’s interior minister and head of the Lega, Matteo Salvini.

The problem for the government is that just postponing the fuel taxes is not going to be enough to halt a movement that has spread out past the initial fuel tax issue to encompass a more complicated tangle of socio-economic problems.  As one Yellow Vest stated after rejecting talks with the Macron government, “The French are not sparrows. We do not like crumbs. We want a baguette.”

What options does Macron have? If pressed further he could, under the constitution, change the government, firing Prime Minister Édouard Philippe and replacing him with someone more amenable to the public. And if conditions deteriorated further, the president could declare a state of emergency. However, Macron is keenly aware that what triggered the nationwide explosion that rocked France in 1968 started out as student protests, but expanded after the government responded heavy-handedly with force, thus gaining the sympathy of a broader base of the population. The declaration of a state of emergency would be a drastic step and no doubt provoke even greater public protests.

According to a poll conducted by Harris Interactive, 72 percent of the French support the Yellow Vests, though over 85 percent indicated they did not favor the use of violence.  For their part, the police have been very cautious in approaching the problem and a number of those injured in the melees have been security forces. Thus far only three people have died and hundreds have been injured; a real crackdown by the government would certainly raise those numbers.

Macron was supposed to represent a new wave of French politics, a departure from the traditional parties of the left and right. In 2017, the electorate gave him the presidency and a comfortable majority in the National Assembly, while savagely punishing the Socialists and moderate right. Sadly, Macron failed to capitalize on his political dominance; instead he has shown himself to be a distant, almost imperial figure, given to pondering over Europe’s future and the global liberal order while finding the process of reforming France difficult and less appealing. It was not lost on many French that while parts of Paris burned over the weekend, their leader was off in Buenos Aires at the G20 summit, rubbing elbows with the American president Donald Trump, his Chinese counterpart Xi Jinping, and Chancellor Angela Merkel.

With one eye to the Yellow Vests and the other on the rise of the far-right, President Macron is approaching the May 2019 European Union parliamentary vote as a “contest between progressives and nationalists.” His targets in this battle are Le Pen in France, but also those in other European countries who lead “the nationalist leprosy.” But that is part of President Macron’s problem—while he is out saving Europe from the threat of nationalism, he faces strong domestic discontent rooted in a tough economic times at home. How he handles the Yellow Vests will also determine the outcome of the May 2019 European Parliament vote in France as well. No one has said that France is easy to govern and the Yellow Vests are proving just that.