What Is Going on in Malaysia—and Why Does It Matter to the United States? 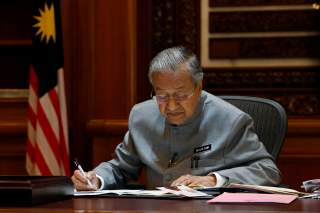 IN THE 1960s, Southeast Asia was the very epicenter of a U.S. security strategy that culminated in the Indochina wars. Over the subsequent decades, the region became an economic success story while it virtually disappeared from the security map. America had other, seemingly more pressing, concerns in Europe as the Cold War waxed and waned and in the Middle East with its endemic instability and the rise of a global jihadist threat. Yet during this same period, China was emerging as an authentic peer competitor of the United States, economically and militarily, with increasingly evident ambitions to dominate East Asia—putting Beijing on a potential collision course with Washington. Ever since World War II, America has maintained a robust military presence in the maritime reaches of the Western Pacific including the South China Sea. However, China has become unambiguous in its assertion that the South China Sea is, in fact, sovereign Chinese territory and the U.S. Navy has no right to be there. As China fortifies its outposts and the U.S. Navy extends its “Freedom of Navigation Operations” (FONOPS) it does not take much imagination to see serious danger ahead.

It is in this context that we should view U.S. relations with the countries of Southeast Asia—especially those that border on the South China Sea. As the military balance of power on the Asian maritime littoral shifts in China’s favor, the American strategic position will increasingly depend on support (or lack thereof) from Southeast Asian governments. That support has become less certain as relations with the two U.S. treaty allies in the region, Thailand and the Philippines, have come under strain. Another key actor, Indonesia, remains deeply ambivalent about how to cope with Chinese ambitions and possible U.S. reactions. Vietnam has a much clearer strategic vision but remains forever constrained by the dangers of antagonizing neighboring China beyond some threshold.

This leaves Malaysia as somewhat of a puzzle. The Federation, as it is also known, has obvious intrinsic importance. It is at the geographic center of Southeast Asia and the one country in the region that bridges its peninsular and archipelagic divide. It is also a “third world” success story on multiple dimensions: economic development, political democracy and multiethnic cooperation. The Federation constitutes perhaps the best example of a predominantly Muslim country achieving successful, multi-faceted modernization. Yet Malaysia has been a perennial stepchild in terms of U.S.-Asia policy.

The reasons are rooted in history. In Southeast Asia, the Philippines was an American colonial possession, but Malaya, Singapore and the territories of northern Borneo were British. They returned to British control after World War II. British armed forces with extensive local support fought and defeated a communist postwar insurgency on the peninsula. When London granted independence to a new Malayan (1957) and subsequent Malaysian Federation (1963–5), it did so to a British-educated, Anglophile elite. Britain made good on defense commitments to its former colonies by helping Malaysia defeat an Indonesian military effort to dismember the new Federation.

AS THE Cold War became more lethal in Southeast Asia, America focused on Indochina—culminating in the Vietnam War. With that bloody conflict over, Washington in the 1980s and 1990s turned its attention to the epochal events surrounding the conclusion of the Cold War in Europe, the demise of the Soviet Union and war in the Persian Gulf. There was no reason to expect that Malaysia would receive any attention aside from its attractiveness to foreign investors as an economic success story. In fact, it received unexpected, and entirely negative, attention due to repeated public statements from its long-serving and politically dominant prime minister, Mahathir bin Mohamad. As a political personality, Mahathir was reminiscent of the anti-Western/anti-U.S. firebrands of the early 1950s and 1960s—men like Kwame Nkrumah, Sukarno, V. K. Krishna Menon and Fidel Castro. His harsh criticism of Israeli policy toward the Palestinians plus gratuitous comments about Jews dominating international finance earned him a reputation in the Western media as anti-Semitic. But much of this involved rhetorical pyrotechnics and personal proclivities rather than policy substance. When it came to issues involving national security (defense, counterterrorism, intelligence) and the economy (trade, investment, education) Mahathir fostered close ties with U.S. counterparts. While American diplomats were having a terrible time in Malaysia, the U.S. Pacific Command and Lockheed Martin were getting along just fine.

Above all else, Mahathir is a modernizer and a Malaysian nationalist. He’s also extremely intelligent. In 2003, Mahathir did something that autocrats (even elected autocrats) rarely do: at the height of his political power, he resigned and turned over authority to his elected deputy. However, Mahathir did not slip into quiet retirement; he became a vocal critic of his successor and effectively forced his resignation in favor of a new prime minister, Najib Razak, scion of one of Malaysia’s most prominent political families. Like Mahathir, Razak was a modernizer with a strategic view of Malaysia’s future. Like Mahathir, he understood that Malaysia’s system of government sanctioned communal preferences (i.e., systematic affirmative action favoring Malays) was unhealthy economically, socially and politically for Malaysia. And like Mahathir, he chose not to take on all the powerful vested interests that supported those preferences. But Najib differed from Mahathir in one crucial respect: he proved to be personally corrupt on a spectacular scale.

THE U.S. Department of Justice has been formally investigating allegations that billions of dollars have gone missing from the national sovereign wealth fund and hundreds of millions have gone into the personal accounts of Najib and his wife. The Malaysian government went to extreme lengths to stifle any domestic negative backlash from these events. The attorney general and head of the government’s anti-corruption agency were replaced. The new attorney general announced that there was nothing to investigate because nothing was missing. Traditional media outlets, under tight government control, censored stories about 1Malaysia Development Berhad (1MDB), Malaysia’s state development fund. The leader of the political opposition had been jailed on charges of moral turpitude (sodomy) and electoral districts were heavily gerrymandered to favor the ruling party—the United Malays National Organisation (UMNO). UMNO has been in power since Malaysia’s founding (over sixty years). These measures plus the liberal use of government money to buy electoral support led Najib to call national elections in May; he was fully confident that UMNO would win again.

But these expectations were upended by two developments. First, for many Malaysians, social media had become their preferred news source and vehicle for political mobilization—and social media had largely escaped the more draconian government efforts at media control. Civil society organizations mounted determined and relentless campaigns in support of clean government using these platforms. Second, Mahathir, now in his nineties but newly reinvigorated by successful cardiac surgery, offered to lead a fractured and dispirited opposition in the scheduled elections. His battle cry was saving the country from corrupt leaders. He also pledged that if elected he would seek an immediate pardon for Anwar Ibrahim (a man he had jailed in an earlier time) and would pledge to turn power over to him as the rightful leader of the opposition. In the meantime, Anwar’s wife would stand in for him during the campaign and in the formation of a new government.

It was riveting theater, but almost no one thought it would actually work. However, Mahathir’s reemergence had a galvanizing effect. Suddenly, a dispirited, fractured and leaderless opposition was coherent, purposeful and credible. When the votes were tallied, the opposition had won so convincingly that the results overwhelmed the many extralegal firebreaks and stratagems the government had put in place to insure an UMNO victory. Mahathir immediately demanded that the king play his constitutional role and mandate him to form a new government. After hours of silence and delay, the king complied.

It is reasonable to suspect that had the vote been closer or the opposition led by a less formidable figure, Najib and the UMNO leadership would have tried to enlist the king to annul the election results. But that did not happen, and Mahathir immediately made good on his pledge to seek a full pardon for Anwar that would both affect his release and allow him to reenter politics. Anwar is now a free man and has been re-elected to a seat in parliament. He is now eligible to resume his old position as deputy prime minister. However, he has repeatedly stated that he does not intend to pressure Mahathir. How soon Mahathir will actually relinquish power remains to be seen. Meanwhile, Najib has been arrested and charged with grand larceny and his passport (and that of his wife) has been seized. If that were not enough, the new government has formally reopened a decades-old murder inquiry that may implicate Najib personally. A veteran parliamentarian has also called for Najib to be investigated in relation to at least two more recent politically-related murders. Malaysians were transfixed as police carried out one raid after another in full public view, seizing vast quantities of personal luxury goods from the couple’s various properties. It is a drama replete with characters that Shakespeare would love.