What Happened to 'America First'? 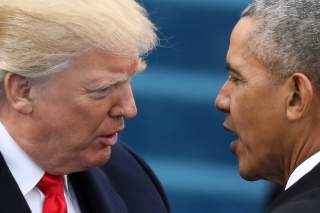 Millions of Americans voted for Donald Trump because he promised a new national military strategy that would diverge sharply from the ideologically driven interventionism of the past twenty years. “We went from mistakes in Iraq to Egypt to Libya,” Trump told voters. “It all began with a dangerous idea that we could make Western democracies out of countries that had no experience or interest in becoming a Western democracy.”

Barely six months into the president’s first term, Trump supporters are seeing familiar trends—a threatening Turkish military buildup on the border with Syria, the American shoot down of a Syrian Jet and rising tensions with Russia, Iran and North Korea. They sense that a true “America First” strategy is not going to happen with the president’s current national security team. They want to know why.

Part of the answer is that changing the Washington status quo is never easy, especially for a president whose life has revolved around business, not politics. The rest is easier to understand: personnel is policy.

Imagine for a moment that you are a highly successful businessman with a global reputation. Fate makes you the director of surgery at a major metropolitan hospital. You know little about medicine and nothing about surgery, but you are a prudent person. You consult with the surgeons on the staff and with the hospital’s board of trustees. You select those surgeons that you are told are “the best and the brightest.” Problem solved, right? Wrong.

What if it turns out that the doctors you appointed to run the Department of Surgery have never performed complex surgeries? What if their experience is limited to treating cuts, bruises and performing the occasional appendectomy? What if the few truly major surgeries they performed resulted in fatalities and even led to malpractice lawsuits?

In that case you’d be mistaken to rely on the error-prone experts. And the same is true when it comes to assembling a foreign policy team. Rather than risk repeating mistakes, you’d reach down past the retreads and choose a new leadership team that is divorced from previous foreign policy misadventures. After all, that’s what President Trump promised.

Yet when it came to selecting people to advise the president on national defense and military strategy, the Trump team picked men for jobs in the Department of Defense and the White House on the basis of high-media profiles, medals and uniforms—as well as advice from former secretaries of defense and four-star generals who were leading figures in the three trillion dollar debacles of Iraq and Afghanistan.

That’s why no one should be surprised that the “best military advice” President Trump’s senior national security leaders can offer is to reinforce the strategic disaster in Afghanistan and expand the slow, ponderous fight against ISIS in Raqqa into a broader American military intervention into the regional snake pit called the Syrian Civil War. People do what they know.

Like their predecessors in the last two administrations, the current national security team is not pursuing a coherent national military strategy tied to concrete strategic interests. On the contrary, they are committed to open-ended military operations without any expectation of conflict termination.

The problem confronting the president is serious. Today’s international system is radically different from the world of 2001. The United States no longer has an overwhelming monopoly on key military capabilities. Great-power war is no longer a remote possibility.

In his book Currency Wars, James Rickards offers the example of a forest fire that is analogous to the outbreak of a major war. Whether a fire destroys a single tree or a million acres, the destruction begins with a single bolt of lightning. The same bolt of lightning can strike a thousand times with little or no effect, or it can cause a catastrophic fire. Wars between great powers or alliances of regional powers are similar. Major wars are the massive forest fires no one expects, but given enough sparks, they inevitably occur.

Mr. President, you said, “It’s time to shake the rust off America’s foreign policy. It’s time to invite new voices and new visions into the fold.” You were right. If the Trump Presidency is to succeed, we’ll need a new national security team with an “America First” mind-set.

The country needs a team with an acute sensitivity to the vulnerability of U.S. military power far from American shores and an appreciation for the importance of conflict avoidance. Events in the Middle East, Asia and eastern Europe suggest there is no time to lose.

Col. (ret) Douglas Macgregor, U.S. Army, is a decorated combat veteran, a PhD and the author of five books. His most recent book is Margin of Victory: Five Battles that Changed the Face of Modern War (Naval Institute Press, 2016).