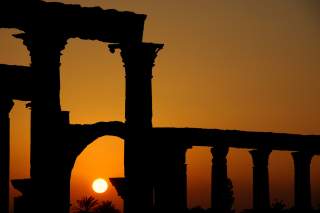 One could be forgiven for taking a look at the battlefield in Syria and assuming that the United States and its coalition partners are only a few weeks away from obliterating the Islamic State from the face of the earth. The Trump administration, for all its faults, has used its first seven weeks in office to pursue ISIS with renewed vigor—delegating more tactical authority to the commanders running the war, cutting down on the bureaucratic malaise that military officials argued hampered military operations during the Obama administration, and signing off on the deployment of a Marine artillery unit north of Raqqa to provide covering fire for the Syrian Democratic Forces inching towards the city.

Indeed, from the picture that the Pentagon is painting, ISIS is on its last legs. Some of its mid-level bureaucrats are fleeing Raqqa and their lives and it’s only a matter of when—not if—the caliphate capital will be fully liberated.

On this point, the Pentagon is certainty correct. Raqqa will be retaken one way or the other. While it’s true that Washington, DC still needs to prepare a plan for how the city will be retaken (as Ambassador Frederic Hof has written, relying on Kurdish forces to do the heavy lifting could severely hurt U.S.-Turkish relations), it’s practically a guarantee that ISIS will lose given the power imbalance.

What is less clear is what U.S. policy will be after Raqqa is free from ISIS dominance and how Washington’s overall stance on Syria will evolve once the caliphate is destroyed. Simply put, we don’t know what the policy is going to be or whether the Trump administration is even prepared for the aftermath. The White House has said little, if anything, about the day after; the national security establishment on both sides of the Potomac appear to be focused almost exclusively on tactical questions like how close U.S. special operations forces should be to the front and when the offensive should launch.

Unless there is a secret post-Raqqa plan that the American people don’t know about, it’s well past time for officials in the state and defense departments to come together and establish an interagency working group that addresses the questions that will determine whether ISIS stays defeated or whether another version of the terrorist group is able to take advantage of a vacuum in governance.

The question of who will rule Raqqa once ISIS is defeated hasn't been answered sufficiently by the administration or by its partners in the coalition. Washington has largely accepted the working assumption that governance, policing and post-conflict reconstruction will be handled by some kind of local governing council indigenous to the area. Manbij is seen as a positive model in this regard: ISIS is removed, and the liberating force quickly sets up a body that is put in charge of getting the city’s residents back to their homes, providing them with humanitarian assistance and affording them a semblance of public order. Ironically, this formula is very similar to the “government-in-a-box” mantra that Gen. Stanley McChrystal used during his tenure as the commander of U.S. forces in Afghanistan—that is, quickly ensure that the local population doesn’t succumb to lawlessness once the insurgent force is removed.

Establishing a local governing council in Raqqa, however, will require a lot of preparation to make it a success. While there’s a widely-held presumption that any post-ISIS political authority in a majority Arab city will have a majority Arab composition, it's difficult to believe that the Kurdish component of the Syrian Democratic Forces will agree to simply walk away from Raqqa without any rewards after such enormous sacrifices over the past two and a half years. Although Kurdish officials have insisted in the past that they have no interest in staying in Raqqa—“It makes no sense for us to stay there,” a Kurdish commander told Voice of America last November—that calculus could very well change if the Arab components of the Syrian Democratic Forces are bogged down in vicious fighting and need their more experienced Kurdish counterparts to step into the breach. The United States must be prepared for this eventuality.

A far more fundamental question is what happens to Syria as a whole. To date, the Trump administration has been relatively muted on the subject of Bashar al-Assad and his regime. Official U.S. policy in Syria continues to endorse a Syrian-led and Syrian-owned political negotiation process whereby a mutually acceptable transitional government with full executive powers is hammered out between the regime and the opposition. The political roadmap embedded in UN Security Council Resolution 2254 is still seen in Washington as the only game in town. And Michael Ratney, a holdover from the Obama administration, continues to liaise with Special Envoy for Syria Staffan de Mistura to make the Geneva process a success. Yet President Trump himself doesn’t seem to be particularly interested in the UN-mediated negotiations, let alone insisting on Assad’s removal.

After the Raqqa operation, the Trump administration has a choice to make. Does it become a more assertive guarantor of the Geneva talks along the lines of the previous administration, insisting upon Assad’s resignation at the end of a transitional government? Will it lean on the HNC to become more realistic based on realities on the ground, including the politically and morally painful concession of dropping the demand for Assad’s immediate removal? Or will the White House leave the entire endeavor to the UN, the Russians and the Turks and wash its hands of the whole enterprise after a year of rather fruitless and unproductive talks? How important, in other words, is Syria’s political future to the United States?

The sooner that Washington begins working on these subjects, the better U.S. policy will be. Taking Raqqa will be the easy part; keeping Raqqa out of ISIS’s hands will be a lot more complicated.