What Happens When America First Collides with the Chinese Dream? 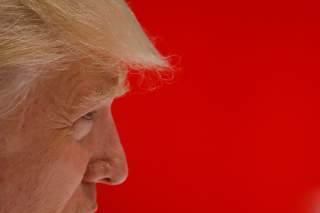 This document highlights China’s intent to more actively participate in global maritime governance, including in maritime safety and environmental protection. It alludes to China’s vision of reshaping the international maritime order to one that is “fairer, more just and reasonable.” The document also puts forward a “maritime security concept” that is aligned with Xi Jinping’s broader “Asian security concept.” Such a vision is explicitly linked with China’s responsibility as a great power and its desire to increase its “maritime soft power.”

Normative Competition Between China and the United States

Prominent international-relations scholars, such as Hedley Bull and Iver Neumann, have suggested that both material resources and moral standing are crucial in a country’s quest for great-power status. Historically, for example, Napoleonic France and Nazi Germany had extensive military powers, but insufficient soft power. On the other hand, Poland in the interbellum period had moral standing, but did not possess significant material resources. None of these countries could be considered as great powers.

China is aware of the importance of international moral standing. Its leaders have repeatedly emphasized the need to bolster China’s soft power in order to fulfill “the great rejuvenation of the Chinese nation.”

The question is whether China will bolster its soft power through working within the existing international world order, or increasingly develop its own set of rules as it continues to rise. John Ikenberry has famously argued that rising powers such as China will not challenge the “Western-oriented world order,” because the existing world order is “historically unique . . . more liberal than imperial—and so unusually accessible, legitimate, and durable” . . . Nonetheless, despite the beliefs of liberal scholars like Ikenberry, China has vehemently disagreed with the United States over international norms and what constitutes as “moral” and “legitimate” behavior. China perceives the status quo as American hegemony that stands in the way of its “Chinese Dream.” Two areas stand out in this regard.

The first is cybersecurity: China and the United States disagree on the interpretation of internet freedom, internet surveillance and whether the state or other stakeholders should play the leading role in defining the rules. China perceives Western media as being unfairly critical of China, and has emphasized that the “freedom of opinion and expression” cannot pose a threat to internal law and order. The issue of internet freedom, therefore, becomes a competition for global influence. The failure of the group of government experts (GGE) at the United Nations to even issue a consensus report following its June 2017 session shows Beijing is increasingly confident about working with other like-minded nations in challenging U.S. efforts to develop and entrench cyberspace norms in international institutions.

Second, China and the United States have in recent years intensified their debates on what freedom of navigation and freedom of overflight means under international law. This includes whether the freedom of navigation for military vessels should be distinguished from that for commercial ones, and the circumstances under which prior notification and authorization are required. The United States’ freedom-of-navigation operations, in particular, have become a major bone of contention between the two countries. This competition between China and the United States could also extend to other areas such as norms development in the outer space.

Recent reforms to the People’s Liberation Army (PLA) look poised to increasingly challenge the United States’ moves in the maritime, cyber and information domains. Over the past two years, the PLA has embarked on a series of reforms to improve its joint and multidimensional capabilities at the national and theater levels. These reforms are the latest iteration of the PLA’s modernization process since the 1970s. What separates the latest modernization effort from previous ones is the improvement of the PLA’s toolkit that will allow China to compete with the United States in a more multidimensional manner.

Much attention is often paid to the improvements in the PLA Navy’s force-projection capabilities in the form of aircraft carriers, major surface combatants and amphibious assault craft. These capabilities are indeed crucial for China to realize its ambitions of becoming a maritime great power. What remains relatively hidden, however, is the increasing centrality of the information domain, particularly cyberpower, in the PLA’s capability development.

China’s growing information warfare capabilities have also extended beyond that of the PLA to include civilian government agencies and nongovernmental entities. This “civil-military fusion” allows China to draw from the commercial sector and academia to support the PLA’s military missions. Such missions can include the control of information flows, disruption of an opponent and shaping of perceptions in social media and cyberspace. The integration of China’s civil-military information warfare expertise on a national scale is distinct from the United States’ approach, which tends to draw clearer boundaries.

The improvement of the PLA’s capabilities in the maritime, cyber and information domains provides the muscular tools for China to better challenge the United States in the shaping of norms, and to deny the U.S. efforts to reinforce nascent norms that China perceives as against its interest.

Implications on ASEAN and the Way Forward

In recent years, Southeast Asia has become fertile ground for China and the United States to compete and play out their differences. Since the failure of the Association of Southeast Asian Nations to issue a joint communiqué following the ASEAN Ministerial Meeting held in Phnom Penh in 2012, much has also been said about how ASEAN has been caught up in the strategic and economic rivalry between China and the United States, threatening ASEAN’s unity and credibility.

Differing strategic and economic interests aside, ASEAN countries also disagree on various aspects of norms and international law. For example, countries like Indonesia, Malaysia, the Philippines, Vietnam and Thailand share China’s interpretation that the United Nations Convention on the Law of the Sea impose restrictions to the freedom of navigation for military vessels. Other ASEAN countries have adopted the U.S. view that the exclusive economic zones (EEZs) and high seas could be used for military purposes. These differences within ASEAN have thus far been kept under control. They could, however, exacerbate should ASEAN member-states take sides in the intensifying normative competition between China and the United States for short-term political gains.

The preferences of China and the United States could shift over time. China is a rising great power with expanding global interests, and its existing interpretation concerning freedom of navigation under the United Nations Convention on the Law of the Sea would limit the PLAN’s activities in the EEZs of other states. China’s heavy reliance on internet censorship may also be unsustainable as more Chinese regions become inextricably linked with the global community through China’s ambitious Belt and Road Initiative.

In the meantime, however, ASEAN needs to enhance cooperation and agree to a common set of norms and behavior, independent of the U.S.-China dynamics. ASEAN has achieved some success thus far. For example, in the cyber domain, Singapore’s minister for communications and information and the minister-in-charge of cybersecurity, Dr. Yaacob Ibrahim, said during the inaugural ASEAN Ministerial Conference on Cybersecurity held last year that while staying engaged in global conversations on cybersecurity, ASEAN must ensure that “norms and behaviors are kept relevant and applicable to [ASEAN’s] unique context and culture.” ASEAN member-states have also agreed on the importance of developing “a set of practical cybersecurity norms of behavior in ASEAN.”

It remains to be seen whether ASEAN countries could work with the United States and China to manage differences and find common ground, including in the normative realm. To do so, ASEAN countries would have to clearly define and agree upon what constitutes ASEAN’s “unique context and culture,” as well as what is in the interest of ASEAN as a whole. This would in turn provide a more solid foundation for ASEAN to engage and negotiate with the great powers through ASEAN-led platforms such as the ASEAN Defence Ministers’ Meeting Plus and ASEAN Regional Forum. Track Two networks in ASEAN, United States and China could also play a constructive role in this regard.

Angela Poh is a PhD Candidate at the S. Rajaratnam School of International Studies, Nanyang Technological University. Ong Weichong is assistant professor at the school.