What Happens When China Excludes Taiwan from the World Stage 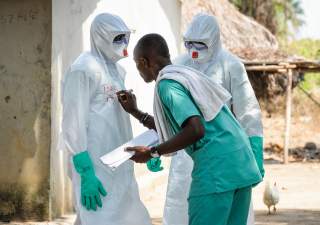 Taiwan, after participating for eight straight years in the annual World Health Assembly (WHA) in Geneva, has suddenly been left out this year with no invitation to attend. The reason is glaringly obvious: Beijing is playing politics in order to marginalize Taiwan through limiting its international space. China has used its clout as a PermFive member of the UN Security Council to isolate Taipei from a whole array of international organizations.

The World Health Organization, which organizes the assembly, the main policy-formulating body for global health issues, is headed by Director-General Margaret Chan, a former director of health in Hong Kong. This is a possible indication of why World Health Assembly has suddenly given the cold shoulder to Taiwan.

Beijing has assumed an overbearing manner in attempting to curb Taiwan’s participation with international organizations following the election of Tsai Ing-wen as Taiwan’s president last year. At the International Civil Aviation Organization (ICAO)’s thirty-ninth assembly in Montreal in the fall of 2016, for example, Taiwan was excluded from any participation at Beijing’s insistence. Taiwan had participated as a “guest” at the invitation of the ICAO council president at the last assembly held in 2013.

The latest, crude example of Beijing’s blatant interference occurred at the recent opening ceremony of the Kimberley Process conference in Perth, Australia, on curtailing the trade in conflict diamonds. A rude and unruly Chinese delegation seized the microphone and loudly protested the presence in the room of a delegation from Taiwan. Time magazine reported that while Australia protested to the Chinese ambassador the uncouth behavior of the Chinese delegation, with one official reportedly referring to it as “disgusting,” the Taiwan delegation was still forced to leave the conference.

It took a health crisis involving a major pandemic in the first place to win Taiwan a seat at the table to interact in a timely manner with its international health-care professional colleagues. The 2003 outbreak of Severe Acute Respiratory Syndrome—which hit East Asia hard and left a death toll of thirty-seven dead in Taiwan, 299 in Hong Kong and 349 on the Chinese mainland—exposed the folly of isolating Taiwan from the international health-care network at a time when a fatal disease was on the loose with no limit to national boundaries. The roadblocks that WHO threw up on information-sharing with Taiwan during the SARS outbreak caused the U.S. Congress to spring into action in Taiwan’s defense.

American Institute in Taiwan Chairman James Moriarty reaffirmed this U.S. policy in Taipei on April 25 when he said that “in particular, the U.S. has welcomed Taiwan’s participation as an observer at the last eight WHA meetings. We look forward to Taiwan’s continuous participation at this important event.”

Ronald Reagan, in criticizing the cynical politicization of the issue of international food assistance, once famously said that “a hungry child knows no politics.” In discussing the recent attempts to block Taiwan from securing observer status at the upcoming World Health Assembly (May 22–31) Taiwan’s President Tsai Ing-wen sent out a tweet on May 7 pointing to Taiwan’s extensive contributions to the global health system. She also shared a YouTube story about a girl from a developing country who had received a liver transplant as a thirteen-month-old baby in Taiwan. President Tsai’s message was loud and clear: a sick child knows no politics and global health issues know no national boundaries.

The Ebola pandemic of 2014 most recently demonstrated that an international health crisis can suddenly arise with little warning. It is quite apparent, therefore, that the health concerns of not only the people of Taiwan but of the entire global population require that Taiwan’s expertise and resources be fully linked with the global health-care network as embodied in the assembly. Taiwan worked closely with the U.S. Centers for Disease Control and Prevention and west African governments during the Ebola outbreak and donated $1 million in December 2014 to the agency’s Ebola response effort. Taiwan was there on a vital health issue when the international community needed its assistance. The United States and like-minded countries, therefore, should similarly be there for Taiwan to assure that its voice is heard in Geneva on the vital health-care issues of today. With WHO now declaring a new outbreak of the Ebola epidemic in Africa, Taiwan's cooperation and assistance are more critical than ever.

Dennis P. Halpin, a former adviser on Asian issues to the House Foreign Affairs Committee, is a visiting scholar at the U.S.-Korea Institute (SAIS).