What If the 9/11 Attacks Never Happened? 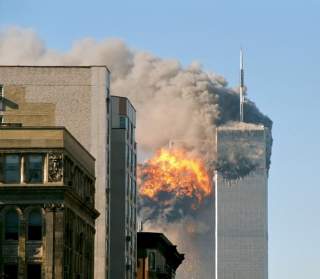 If the September 11, 2001, attacks never happened, Americans would be marking some later date as the anniversary of the most devastating terrorist strike on the homeland in modern history.

The high water mark of terrorist attacks against Americans remains the late 1980s. Fueled by Kremlin funding, most of the attacks came on foreign soil: Europe, the Middle East and Latin America. Congressional hearings on terrorism became as numerous as new Taylor Swift boyfriends are now.

When the Soviet Union collapsed and the checks stopped coming, transnational terrorism threats quickly trended down.

In the ‘90s, transnational terrorism made only occasional headlines. Among them were the first World Trade Center bombing (Feb. 26, 1993), which killed six and Ahmed Ressam, the inept “millennium bomber” arrested trying to enter the U.S. on Dec. 14, 1999.

Rather than raise red flags, these attacks evoked images of the Keystone Kops. If that was the best the terrorists could muster, most Americans thought, then we had little to worry about.

In 1999, Congress received the Hart-Rudman report declaring: “Americans will likely die on American soil, possibly in large numbers” from a terrorist attack. Few paid attention to the dire warning. The commission’s call for establishing a Department of Homeland Security was all but ignored.

While America slept and the pace of terrorism waned, the plotting against us went largely unnoticed. Even the Hart-Rudman commission largely missed the building threat.

Hart-Rudman was concerned less about a global wave of transnational terrorism than the risk of a handful of terrorists obtaining chemical, biological, or nuclear weapons—weapons of mass destruction. Their model was not al Qaeda but Aum Shinrikyo, a wacky Japanese death cult that released poison gas in a Tokyo subway in 1995.

Yet the storm of transnational terrorism was gathering. At its center, arguably, was the shadowy Haqqani network, a terrorist-criminal-extremist group in Pakistan. It was the Haqqanis who first organized efforts to bring in “foreign fighters” to help kick the Soviets out of Afghanistan. The Haqqanis backed the Taliban and convinced them to let Osama bin Laden set up training camps in Afghanistan. It was the Haqqanis who nourished the vision of transforming the Islamist agenda into a global insurgency.

This is not to portray Osama bin Laden as simply a Haqqani puppet. He was not. Rather, he was a terrorist entrepreneur of extraordinary ambition. Bin Laden shared the old Soviet idea of using terrorism as tool to undermine America’s global influence, but he dared something that even the Kremlin left undreamed—taking the fight directly to America on a large scale.

Bin Laden laid out his rationale for this new strategy in a fatwa and repeated it in public interviews. As he told ABC’s John Miller in 1998:

After God honored us with victory in Afghanistan…, Muslim minds no longer believed in the myth of superpowers. The youth no longer saw America as a superpower.

After a few blows, they forgot about being the world leader and the leader of the new world order. They left, dragging their corpses and their shameful defeat, and stopped using such titles. They learned in America that this name [i.e., God] is larger than them.

Bin Laden reasoned that punishing attacks on the United States, would eventually lead the U.S. to withdraw from the world, leaving space for an Islamist movement to reestablish the historical Caliphate.

The rise of bin Laden and America’s half-hearted effort to stop him in the 1990s are well-documented in the 9/11 commission report. It makes for grim reading—like an inevitable unfolding of a Greek tragedy.

The point is that, if the second World Trade Center bombing had failed, al Qaeda would have tried again and again until American streets ran red. Al Qaeda, ISIS and their affiliates will continue their campaign until it’s clear once and for all their narrative is false, that America will not falter, that the Caliphate cannot stand.

When their narrative is disproved, when the Islamist movement lies dishonored and abandoned, this wave of transnational terrorism will fade away.