What Iranians Are Saying about the Nuke Deal 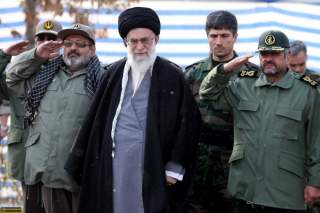 Iran’s foreign minister, Javad Zarif, was on his way back to Tehran from Lausanne as accolades began to pile up. At the airport, he received a rapturous reception, as if the Team Melli, Iran’s national soccer team, had beat Germany.

But not everyone was praising Zarif. Fars News, a hardline outlet, called some of Iran’s nuclear compromises a “disaster.” Hardline Iranian officials are questioning what exactly Zarif surrendered during the talks. The next few days and weeks, as the negotiators look to fine-tune the agreement, will reveal more, but the first reactions are nonetheless telling.

Iran’s Supreme Leader, Ayatollah Ali Khamenei, has yet to tweet anything on the nuclear agreement, but the earliest of signs suggest that he is still backing the talks and the agreement. One of the conspicuous signs was the decision by Islamic Republic of Iran Broadcasting (IRIB) to provide live transmission of President Obama’s post-deal press conference in Washington.

This was the first time in the history of the Islamic Republic that the speech of an American president was broadcast live on Iranian television. The head of the IRIB is a direct appointment by Khamenei, and such a bold move by the broadcaster surely could not have been made without first securing a green light from the Office of the Supreme Leader.

However, much stronger evidence of Khamenei’s acquiescence came the day after the deal was announced. The Friday Prayer leader in Tehran, Ayatollah Mohammad Kashani, who is also hand-picked to deliver the most important weekly sermon, congratulated Zarif and his team and called them “winners.”

These public signals carry the highest seals of approval, but are also a not-so-subtle reminder to those hardliners who are preparing to unleash on Zarif. The Office of the Supreme Leader had evidently transmitted the talking points to all Friday Prayer leaders across the country, as the message of support for Zarif was unanimous.

Ali Akbar Salehi, who is Zarif’s predecessor and remains a top figure in the Islamic Republic as head of Atomic Energy Organization of Iran, called Zarif’s presence in the foreign ministry a “divine blessing.” Salehi is a technocrat who served under Mahmoud Ahmadinejad, but is above all a Khamenei loyalist and has been Zarif’s doppelganger during the latest rounds of talks. Salehi invoking divine support for Zarif also suggests the cue came from Khamenei’s office.

True to form, however, Ayatollah Khamenei never puts all his eggs in one basket. Hossein Shariatmadari, the editor of the hardline Kayhan newspaper—also appointed by Khamenei—was quick to quip that “We [Iran] should say in a word that we gave a saddled horse and received a torn bridle” in the deal. But Shariatmadari’s perpetual cynicism is only meant to give Ayatollah Khamenei a way out if the final rounds of talks in the next three months somehow crumble.

President Rouhani and his foreign minister Zarif have all along acted and spoken in a way that puts Ayatollah Khamenei in the driver’s seat in the nuclear talks. Zarif, often accused by the hardliners to be a sell-out, was again quick to point to the Supreme Leader’s support for the latest deal as he landed in Tehran. “I would like to thank the Eminent Supreme Leader for his outstanding support and guidance to the negotiation team,” Zarif said. In other words, criticism of the deal is criticizing the Supreme Leader. This tactic no doubt has some utility, but it will not stop all the questions that the hardliners have for the returning nuclear negotiation team.

At the same time, as anti-Iran hawks in the U.S. Congress have grumbled about President Obama’s approach to the question of Iran and vowed to take a tougher line, the parliamentarians in Tehran have increasingly played the role of skeptics on their side.

The words of Ahmad Tavakkoli, another longtime political operative, are further evidence that these statements by Iranian parliamentarians are primarily designed to enhance Tehran’s negotiating hand. In an open letter to President Rouhani, Tavakkoli asks that Iran’s nuclear negotiators not fall for the “enemy's trick” and that any final deal should be internationally binding. He also made the point that Iran’s parliament should approve the final deal, which is to be signed by June. This was, of course, a reminder to Washington that if Congress can play the role of spoilers, then so can the Iranian parliament.

It is too early to have a thorough assessment of the reactions inside Iran to the deal reached in Switzerland, but the earliest signs clearly suggest that the Supreme Leader Ayatollah Khamenei is still very much onboard. The noisy criticism made in Tehran in the first hours after the deal does not amount to much in the larger picture of the strategic course set by the Office of the Supreme Leader and pursued by the Rouhani-Zarif lineup.

Alex Vatanka is a Senior Fellow at the Middle East Institute in Washington D.C.