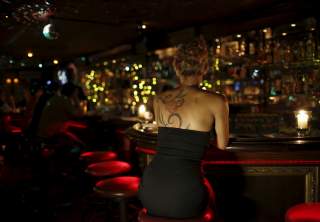 In Israel, a determined cadre of female lawmakers and advocates are on the brink of achieving a long-fought-for victory. For over a decade they have campaigned tirelessly to reduce prostitution and sex trafficking. In August they achieved a major win when Israel’s Ministerial Committee for Legislation approved a bill which, if passed, will ban the purchase of prostitution. The legislation is based on the so-called “Nordic Model,” which has been praised for reducing sex trafficking and prostitution, without further victimizing sellers. Their success is a powerful testament to what female leaders can achieve together, at a moment when women are woefully underrepresented in political office and leadership positions.

Prostitution in the Promised Land

For nearly three decades Israeli women have led the charge against the country’s booming sex industry—an industry that few people realize the extent and misery of. Throughout the 1990s and early 2000s an estimated 3,000 women a year were smuggled into Israel and sold into prostitution. Many had been promised work as au pairs or waitresses, but were stripped of their passports and imprisoned in brothels when they arrived.

For years Israeli human rights and women’s organizations lobbied their government to crack down on sex trafficking, but their entreaties fell on deaf ears. Fed up, they took their campaign global. In 2002 Sigal Rozen, the then-director of the Hotline for Refugees and Migrants, and Nomi Levenkron, a lawyer with the Hotline, brought the issue before the United Nations and a U.S. Congressional Committee. In response, former Justice Minister Meir Shitrit accused them of airing Israel’s dirty laundry on the international stage and “collaborating with the enemy.” Nevertheless, they persisted. And eventually, their efforts paid off. Israel passed a comprehensive anti-trafficking bill, created a police unit dedicated to combating trafficking, and established shelters for victims.

Yet, the government failed to acknowledge that the demand for sex trafficking and prostitution are one and the same, when it stopped short of banning the purchase of prostitution services. In Israel, prostitution exists in a legal gray area—while pimping, owning a brothel, and advertising are illegal; purchasing prostitution is legal. Consequently, though thanks to government efforts, trafficking slowed to a trickle, the demand for prostitution continued unabated and pimps devised new ways to meet it. Their answer? Israeli women and girls from vulnerable communities.

Currently, Israel is home to approximately 13,000 prostituted people, mostly women and girls. Most tend to be first or second-generation immigrants. Many are victims of childhood sexual abuse and lack families they can depend on for love and support. A recent government survey found that the majority enter into prostitution due to economic hardship, though 70 percent of respondents reported that working in prostitution had failed to solve their financial difficulties.

As Israel’s sex industry shifted away from trafficking and toward prostitution, activists refocused their efforts, expanded their coalition, and rallied lawmakers to champion their cause.

Women teamed up to establish new organizations, such as Turning the Tables, an NGO that prepares women in prostitution for a career in fashion through counseling and courses. The organization was established in 2012 by Lilach Tzur Ben-Moshe, a former fashion writer and editor, and Iris Stern Levi, a volunteer coordinator with the Tel Aviv Rape Crisis Center. The studio is a testament to beauty and optimism—though it is located mere blocks from the brothels that border Tel Aviv’s Central Bus Station, it is filled with light, reams of brightly colored fabric, and students who are eager to learn.

To shift public perception about prostitution, organizations have implemented creative campaigns and led protests against strip clubs that serve as brothels and the sex cards that blanket the streets in Tel Aviv. Feminist journalists have complemented these actions by penning a steady stream of articles that expose the seedy realities of prostitution. These sustained efforts have led many Israelis, particularly young women, to conclude that legalized prostitution is incompatible with gender equality. In 2015, 600 outraged protesters converged outside a Tel Aviv brothel. They carried signs that read, “As long as a woman’s body can be bought, no woman is protected.” Days before, a woman who worked there hanged herself in the room where she lived and served between twenty and thirty customers a day. A mere three hours after her death, the brothel was open for business.

Finally, advocates have spent over a decade carefully constructing a coalition of legislators committed to advancing the Nordic Model. Their champions are a group of female lawmakers that span the political spectrum. Some such as Shelly Yachimovich (Zionist) and Aliza Lavie (Yesh Atid) frame their support for the Nordic Model in feminist terms, whereas others, such as Shuli Moalem-Refaeli (Jewish Home), hail it as “Jewish, humane and moral.” Advocates were lucky, in that their cause had early and strong supporters, such as Zehava Galon (Meretz). For years, Galon worked in hand-in-hand with activists to develop and introduce multiple bills based on the Nordic Model. However, advocates also cultivated relationships with lawmakers who opposed the legislation, including Ayelet Shaked, Israel's minister of justice and member of the Jewish Home party. Shaked initially opposed the Nordic Model, viewing it as unnecessary government regulation. However, her opinion changed after meeting with a group of teenagers who had been forced into prostitution. Though Shaked is a recent convert, her support has been invaluable.

“We are Finally at a Tipping Point”

On August 5th Shaked took the unusual step of convening the Ministerial Committee for Legislation during recess to consider legislation that would fine sex buyers and expand health and rehabilitation services for people engaged in prostitution. The committee unanimously approved the proposed bill, which will go before parliament when it reconvenes in October. If passed, Israel will join the ranks of nations that have adopted the Nordic Model, which include Sweden, Canada, Iceland, and Norway.

The path to this point has been difficult. In an op-ed written for the Times of Israel, Lavie noted that of all the issues she has dealt with throughout her career, “none have sparked such resistance and heated responses” as this. Yet, advocates and legislators alike are confident that the government-sponsored bill will pass. “The work in the field was fearless and there has been a real change in parliament’s perception of this issue,” Tzur Ben-Moshe explained. “We are finally at a tipping point.”

Over the course of decades, this determined coalition of Israeli women did exactly what research shows women do when they have the opportunity to lead—they found common ground, fought to promote equality and the welfare of their society, and persisted despite adversity. In addition to bringing Israel one step closer to eradicating prostitution, these women have powerfully reminded us all of the need for women leaders.