What Is Jill Stein Trying to Prove? 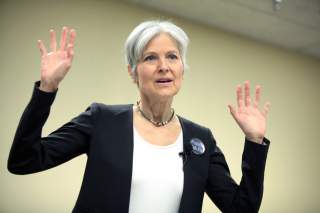 Another day, another Jill Stein recount request. The 2016 Green Party nominee has already initiated the process of recounting ballots in Wisconsin. She is now moving on to Michigan after Pennsylvania told her she missed the deadline.

What does Stein hope to gain through this quixotic quest? The three states mentioned pierced Hillary Clinton’s blue wall and put Donald Trump in the White House. In Michigan and Wisconsin, the results were unexpected based on the public polling. (Clinton was leading in Pennsylvania but within the margin of error—Trump’s win there was consistent with the pre-election data, analyzed correctly.)

It stands to reason that Clinton, who lost all three states narrowly, might want to take a second, closer look. But Stein obviously cannot win. And all three states would have to flip to overturn Trump’s Electoral College majority. So even if the recounts changed things in two states, it wouldn’t cut it.

The odds are even longer than that. Typically, a losing candidate might recoup a few hundred votes. That’s one of the reasons Al Gore contested Florida in 2000, where George W. Bush won by just 537 votes out of over 6 million cast. Trump’s margins in Wisconsin and Michigan are narrow, nowhere near that close—he received 22,177 more votes than Clinton in the former and 10,704 more votes in the latter.

Even many Democrats are inclined to throw in the towel on 2016. Clinton’s team has indicated it will be part of the process where Stein succeeds in getting recounts, but doesn’t appear to expect anything to come of it. After all, they are the only campaign that could benefit from the recounts and they didn’t push for them.

Leaving aside the fact that tilting at windmills is precisely what perennial Green Party candidates do, there are a few reasons this move makes sense for Stein. First, forget about the Greens and think of the green: Stein has raised more than twice as much money for the recount effort as she did for her presidential campaign.

It’s true that Stein technically can’t use this money for purposes other than the recount. But she can do a lot to promote herself and the Green Party without crossing the legal line. Perhaps more importantly, this expands her donor lists for the future. It’s a tactic employed by scam super PACs authorized by the dreaded Citizens United decision.

The fundraising haul is one of many signs that there is a lot of anger and disbelief on the left about this election. Not only do they loathe and fear Trump, they were supposed to beat him. The polls indicated that Clinton was going to win and Trump was going to lose, possibly quite badly.

While this was to some extent a misreading of the polls—as in Pennsylvania, national polling averages had Clinton the favorite but showed Trump having a mathematically realistic chance of pulling off the upset—it is true that few people expected the Republicans to prevail in the presidential contest.

Combine the shock factor with WikiLeaks-inspired talk about Russian involvement in the elections and generic conspiracy theories about voting machines that seem to become prevalent among votes of losing parties every four years, and there is a demand to scrutinize these results.

The fact that Clinton herself just rolled over and conceded confirms everything progressives feared about centrist Democrats. If Clinton really won, her surrender to Trump constitutes a massive betrayal and capitulation. If she really lost, well, this lack of fighting spirit is why. Stein is positioning herself and the Greens as the brave leftists in this scenario.

Liberal mistrust of the Clintons and anger at their third way political triangulation, stoked by Bernie Sanders in the Democratic primaries, helped Stein cross the 1 million vote threshold in November. That’s a lot fewer votes than Libertarian Gary Johnson received but also the Greens’ best showing since Ralph Nader in 2000.

Did I mention Nader in 2000? The consumer advocate became the Democrats’ scapegoat for losing that year, when Bush lost the popular vote but won in the Electoral College under disputed circumstances. Both Nader and the Green Party saw their standing on the left decline as a result.

Stein won more votes in Wisconsin and Michigan than Trump’s margin over Clinton. It is harder to blame her for Trump than Nader for Bush, but not impossible to make the case that her candidacy was at least on balance unhelpful to the Democrats.

Maybe becoming identified with the recounts will make it harder for Democrats to turn Stein into the new Nader?

The idealism of Stein and her supporters is undeniable. But even idealists can be opportunists sometimes.