What Kind of Arab World Does Trump Want to See? 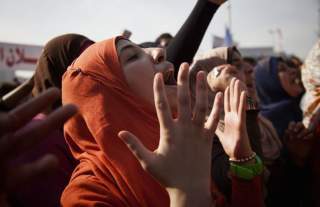 Since September 11, American foreign policy has approached the Arab world in three different ways. The first, under the George W. Bush administration, set out to name, shame and confront an “axis of evil.” The second, under President Obama, eschewed confrontation with Islamist forces in favor of an attempting to engage them politically.

Though the specifics of President Trump’s strategy may yet be in a state of flux, there is a sense that it combines a degree of pragmatism with a willingness to confront enemies, prod allies and, periodically, throw all parties to a given conflict off balance. He clearly identifies “radical Islam” as the enemy. He clearly sees the major terrorist threat to America as emanating from failed Arab states in the throes of civil war. These are valid and legitimate concerns. But they need to be unpacked, and developed into a more granular appraisal of a spectrum of Islamist movements and threats, some of which pose far greater danger than others. To do so is not to succumb to obscurantism—or “analysis paralysis,” as some critics of the Obama White House referred to the latter’s policies. On the contrary, it is a means of sharpening the national-security strategy which the president wants to pursue.

Islamism—the range of modern-day political ideologues informed by ideas about Islam—has many faces. One of them—what can be called “Salafi jihadism”—is indeed a kind of hybrid of religion and fascism. Its fiercest opponents are Arab liberals, who oppose both of these aspects: they want a transcendent civic ethos without religious imposition on people’s lives, and they want a pluralistic system of governance, not a neofascist state.

During the inaptly named “Arab Spring,” the region saw other trends in Islamism that also posed threats to the region. Some condemned terrorism but shared its extremist foundations, indirectly advancing Salafi jihadists’ goals by waging a political war against the same universalist principles that both detested. These “political Islamist’” strategies and their outcomes differed from one country to the next. In Egypt, the government of Muslim Brotherhood stalwart Mohammed Morsi ended in bloodshed. In Jordan, where the Muslim Brotherhood had played a political role for decades, the parliament in which they dominated was peacefully but decisively dissolved. In Tunisia, the Islamist “Ennahda” movement, which won a plurality of votes in the country’s first democratic parliamentary elections, was effectively checked by resilient institutions of civil society in the country—notably, organized labor. In Morocco, where the Islamist Justice and Development Party (PJD) won the right to govern in landmark elections, it was nonetheless checked by the king in key realms—foreign affairs and social policy—as well as Moroccan civil institutions that thwarted the PJD’s aspirations.

The contrasts among these four outcomes show why it is a mistake to view the Arab world or its problems as monolithic. Nor is this simply a matter of debating how to look at recent years in hindsight; one also needs to tailor the approach toward each country’s future.

In Egypt, the Muslim Brotherhood’s birthplace, the movement has been active for nearly a century, survived waves of repression and built a network of charitable associations that won it enduring popular support—if not for its extremist ideas, then for its practical value. This social reality poses a challenge to any attempt to eradicate the movement by force. Now Egypt teeters on the edge of bankruptcy. Inflation exceeds 100 percent. Foreign exchange reserves are at their lowest in over a generation. Unemployment has reached new highs. And popular discontent—a function of the economic crash—promises to destabilize the political landscape through Islamist irredentism and indeed terrorism.

Jordan is not much better off. The Hashemite kingdom is also in the economic doldrums, while surrounded by civil war and jihadism, which in turn have frozen the tourist industry. In a country in which most citizens are of Palestinian descent, the character of Islamist action has always fed on the festering Palestinian-Israeli conflict, and stiffened Palestinian Islamists’ resolve to block any initiative for a settlement. Thus frustration-fueled Islamist action in Jordan—also prone to take a toll in violence—both damages the country and reinforces regressive forces beyond its borders.

Add Tunisia to the list of countries with a large Islamist footprint that are deeply troubled economically. While non-Islamist civil institutions helped protect the country from Islamist domination—Ennahda has lost control over the government, though it remains a power player in parliament—the country has other problems. Across its porous border with Libya flow the arms and jihadist actors that now fuel that country’s own civil war. Meanwhile, poverty has spiked and deficits are enormous. The state has suspended all hiring.

In Morocco, the situation is different, and more hopeful. Following the landmark 2011 constitution, allowing parliamentary elections to determine who heads the government, the Islamists now command only 20 percent of the vote. King Mohammed VI exercised his authority to resolve an electoral impasse when, following the October 7 elections, the designated Islamist head of government was unable to form a majority, despite five months of negotiation with the other factions. Now a new political figure from the Islamist PJD party will take the helm. This experience shows that where a popular monarch can both pave the way toward political participation and temper dangerous outcomes where necessary, his allies should do what they can to help him.

America’s role in these four pivotal Arab countries, and others, should take into account these contrasts. Washington should then formulate differing mixes of political and economic pressure and incentives on the one hand, and, where necessary, military engagement on the other.