What Kurdistan's Anti-ISIS Foreign Fighters Think of All the Attention 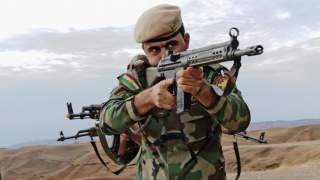 “BREAKING, 200 Iranian revolutionary guards and 150 Hezbollah have entered to the Syrian city of to [sic] Hasakah to help Assad’s regime against US backed Kurdish YPG, they killed many Kurdish civilians.” This message was posted to the Reece Harding News Agency Facebook page on August 19. Harding, an Australian, was killed in June of 2015 fighting against Islamic State in Syria alongside the People’s Protection Units (YPG), the mostly Kurdish group that controls portions of eastern Syria. He is one of hundreds of foreign volunteers who have gone to aid Kurds in Iraq and Syria since ISIS attacked their areas in August 2014.

Sitting in the command tent of General Bahram Arif Yassin last month, Jonathan Rieth, an American, explained his motivations. “You’re sitting watching this stuff unfold, hoping your government will do more. I have a specific skill I know is needed. . . . For me one of the tipping points was a graphic image of a Christian woman kidnapped by Daesh, raped thirty times a day, beaten, mutilated, that didn’t kill her, they took a crucifix and jammed it in her throat . . . that image is frozen in my mind.” Rieth decided that he had to do something, and relocated to the Kurdistan Regional Government in northern Iraq to try to help train the peshmerga to be combat medics. On August 14, his assistance played a role in the battle for Khazir when five thousand Kurds attacked ISIS and liberated twelve villages near Gwer, south of Mosul. He wrote on Facebook, “at one point during the day a car bomb went off injuring six peshmerga.” Along with two others, he was able to aid critically injured peshmerga.

The foreign fighters and medical aid volunteers have been the subject of a great deal of media interest, much of it hyperbolic and focusing on the local or national angle, such as reports from Canada or the UK emphasizing the role of one of their own in the war on ISIS. Other reports have focused on the heroic and the exotic; one described former Hollywood actor Michael Enright, who came in 2015, and there is a recent documentary titled “Basic Instinct: Meet the Westerners Hunting Down ISIS Jihadists in Syria.”

Details often seemed too ridiculous to be true, such as the December 9, 2014, claim that “Dutch biker gangs” were going to fight ISIS in Kobani. The Daily Mail doubled down on that, claiming that German biker gangs were joining the Dutch in this counter-jihad. Images showed them distributing aid to Yazidi refugees and shouldering weapons.

What motivated many foreign volunteers was the ISIS genocide against Yazidis that began in August of 2014. They were inspired by the Kurdish resistance in the siege of Kobani in Syria that began in September of that year. Brian Wilson, a divorced father who had served in the U.S. Army, was one of the first to arrive alongside the YPG. “These guys are not only fighting ISIS but, unlike other armed groups in the region, they also talk about democracy and human rights,” he told Vice News in October of 2014. He made it clear he was not just there for the Kurds but also for Christian minorities and Arabs in the region.

Jordan Matson, who was twenty-seven at the time, also went to fight alongside the YPG as Kobani came under siege in September. From Sturtevant, Wisconsin, he travelled through Turkey speaking no Kurdish but eager to join the fight. He had found the YPG through Facebook, he told a local Fox station in February 2016. “I was just done with it. Just done with watching these people die [in Syria and Iraq]. And nothing being done about.” He was one of the early handful, but by the spring of 2015 there were dozens more. Some went back multiple times. Levi Jonathan Shirley, an American, was killed in July after returning for the battle of Manbij. His mother Susan Shirley told CBS that “he had a very big heart. . . . He was so brave to go back the second time, knowing what he was in for. He just really cared about the underdog.”

Just as the Kurdish regions and dominant political groups are divided in Iraq and Syria, the foreign volunteers who have gone to Syria are divided between those who have served alongside the peshmerga and alongside the YPG, although some have served in both places. Often those who went to join the YPG have found themselves in a more structured environment that has welcomed foreign volunteers. The foreign unit among the YPG is known as Tabur (battalion) 223, and is roughly the size of a large platoon or small company. They pay homage to the international brigades who fought in the 1930s Spanish Civil War with a Facebook group called International Brigades of Rojava. As the YPG has advanced against ISIS, and more Arabs have joined its associated unit called the Syrian Democratic Forces, which was founded in October 2015, the foreign volunteers have expressed more interests in the multiethnic aspect of their conflict. “Let’s be clear,” writes one Freeman Stevenson, on August 10. “I’m here to fight for common decency and humanity, I didn’t come here to fight for the Kurds or for Kurdistan. I came here to fight for people. Some people who happen to be Kurds, Arabs, Turks, and Assyrians happen to espouse an ideology I am willing to die for.”

Those who have gone to fight against ISIS alongside the peshmerga, sometimes serving with Assyrian Christian units such as Dwekh Nawsha, or with Yazidis, have tended to have prior military experience. They also tend to be more openly pro-Kurdish and interested in defending the minority rights that ISIS persecuted. Louis Park told Radio Free Europe/Radio Liberty in February 2015 that he had joined “to kill Daesh.” He argued ISIS was a threat to America and had to be defeated. Brett Royales told the same interviewer that “I can’t sit home and watch what’s going on here—the atrocities, crucifixions, rapes, sex slaves. . . . It’s unacceptable to me.” Some who have volunteered, such as a Norwegian veteran of the Afghanistan war going by the name “Peshmerganor,” have sought to hide their identities.

In general, the KRG has eschewed foreigners in its peshmerga ranks, but some who came say they were welcomed with open arms. A handful of men have found their way to volunteer with the Patriotic Union of Kurdistan (PUK), one of the three largest political parties in the KRG, which also has its own peshmerga units. Kawa Prüfer grew up in Germany and his mother had been a Kurdish peshmerga, so he had family connections, but says he didn’t speak Kurdish when he went to fight. Along with several other volunteers, he traveled to Sulaymaniyah and then to Daquq, on the front line near Kirkuk. However, Prüfer says some of the volunteers he dealt with were liars, and in it for fake glory. One, he says, was a sex offender facing twenty-eight charges back home. When the Kurds found out, he was removed from the unit. He says that after those experiences he became reluctant to have foreigners in his unit. Allan Duncan, a former British army marksman, who has served with the peshmerga for a year, also feels some of the volunteers are more trouble than they are worth, involved in scams or bragging. The peshmerga have hundreds of thousands of local Kurds, and the foreign manpower isn’t needed. Duncan says he came to fight alongside Kurds “for humanity and people of all faiths. This is a fight against evil, nothing else.”

Foreign volunteers have found their way to serve alongside Yazidis, Christian Assyrian militias, the Democratic Party of Iranian Kurdistan (PDKI) and the Kurdistan Freedom Party (PAK), both of which are Iranian-exile Kurdish groups. The PAK has been fighting ISIS near Kirkuk and in Bashiqa, near Mosul.

Some of them can face legal troubles back home. Jamie Read, twenty-four, and James Hughes, twenty-six, were questioned on returning to Heathrow in December 2014. Ashley Dyball, an Australian volunteer, was questioned when he returned in December of 2015 but released without charge. Jitse Akse, a forty-six-year-old Dutch volunteer, was investigated upon returning in June, although prosecutors decided they didn’t have evidence to charge him with killing ISIS fighters. Dutch authorities noted that using “deadly force” abroad could result in prosecution, and they wanted to deter people joining the YPG and other groups abroad. Although most volunteers keep public Facebook pages, sometimes with fake names, some have gone to extraordinary lengths to hide their participation and identities to avoid repercussions from serving, or because they do not seek attention.

Since the beginning of 2016, some volunteers have faced troubles crossing back to the KRG from YPG-controlled areas of Syria, because the KRG has cold relations with the YPG since it is seen as closely aligned with the PKK. The KDP, the ruling party of the KRG, has difficult relations with the PKK. In April 2016, two UK citizens and one Irishman—Jac Holmes, Joe Akerman and Joshua Molloy—were briefly detained after crossing into the KRG from Syria. In other cases, families have had difficulty returning the bodies of those who have been killed in fighting. Since the battle of Manbij, which ended in mid-August, six more names have been added to a monument in Qamishli that commemorates foreign volunteers who have fallen. Around twenty have died in Syria, while it seems that only Mark Belford, an Australian man working for a foundation doing demining, was killed in Iraq, in May.