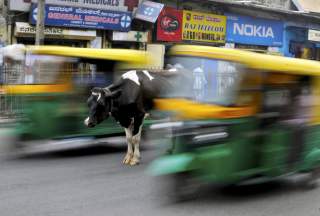 KILLING HUNDREDS of people in the name of “cow protection” would, at first glance, appear to be a headline drawn from a Monty Python skit. Instead, it is a political problem of the first order in India. Since the 2014 election of Narendra Modi and his Bharatiya Janata Party (BJP), hardly a week has gone by without some incident involving emboldened cow-protection vigilantes. All this is despite a fact that rarely gets attention in the bewildered international coverage: India is consistently among the world’s top exporters of beef, with a nearly 20 percent share of the world market in 2016.

How can it be that one of the world’s top exporters of beef is a country where people are subject to organized violence supported by a major political party and civil-society organizations in the name of cow protection? Is this really religious violence—and, if so, in what sense is it “religious”? Why do “religious” conflicts tend to generate high levels of symbolic and physical violence? And how do “religious” conflicts compare to other categories of conflict in general?

AT THE outset it is important to note that “religious violence” refers to a phenomenon much broader, deeper and more ancient than current usage implies. It can also refer to ritual violence in service of a relationship with some aspect of the supernatural. In this sense, “religious violence” is entirely apolitical, in that it serves what could be considered to be a narrow ritual purpose, binding a supplicant to a divine force or being, in the expectation that a satisfactory offering of blood will induce the reciprocal granting of wishes requested by the supplicant. This “contractual” religious function, offering that which is most precious (blood) in exchange for divine patronage, is entirely normal anthropologically speaking and is, presumably, the most ancient and pervasive form of religious violence. It is likely that in the very ancient past human sacrifice, as the bogs of northern Europe often reveal, was normal. Indeed, echoes of human sacrifice remained a part of Roman religion well into the historical era (for example, gladiatorial combat began as funeral games, in which the exercise of violence for a religious purpose was explicit, aside from its evident entertainment value). Other examples from the more recent past include the Aztecs’ well-known industrial-scale practice of blood sacrifice.

Much of what is properly termed “religious violence” is either entirely apolitical, as in the case of animal sacrifice, or, as in the case of human sacrifice, is at least not inherently political. The exercise of ritual violence in service of a narrow religious goal is an entirely normal part of religious history. This is type of religious violence is nonconflictual and is, for this reason, by definition apolitical. The question, therefore, that faces the modern world is not about “religious violence” per se, but instead about religious conflict that leads to violence. Or, in slightly less unwieldy terms, it is about violence that occurs at the intersection of religion and politics.

WAR, AS Clausewitz correctly observed, is a political process. It is an intensification of political violence to achieve some goal. War, as a concept, encompasses a limited (but critical) set of interactions that involve the addition of organized violence to the normal tools of political competition. War can be defined, therefore, as a social relationship in which violence is one of the mechanisms used to adjudicate outcomes. Consequently, to understand war is by definition to understand the social relationships in play.

Wars occur when at least one actor in a political relationship seeks to change the status quo. The operative word here is change: when attempts to change the status quo meet resistance and political actors deploy violence as an additional means of negotiation, war ensues. This raises the question of what precisely, in theoretical language, can change in a political relationship. Political conflicts can be either about the relative rank and status of the actors under stable institutional configurations (groups’ “balance-of-power hierarchy”) or about the rules that govern said rank and status (i.e., institutions themselves).

Conflicts over relative rank and status within an accepted hierarchical structure are a normal part of human history. These are conflicts between like units, concerning where each member of the group ranks among the others. The classic examples of these systems are ancient Greece, Europe between the Wars of Religion and the French Revolution, and then Europe again in the long nineteenth century. In a system of like units, conflict will be about the rankings of those units. It is very rare in balance-of-power systems for units to disappear entirely. For that to happen, some other logic of conflict has to be in operation. In ancient Greece, for example, while Sparta and Athens fought the bitterly long Peloponnesian War, the conflict did not end with the disappearance of Athens—only with a change in its internal governing institutions (i.e., oligarchy versus democracy) to make it less threatening to Sparta. Similarly, during the classical period of balance of power from 1648 to 1789, the only polity to wholly disappear was the Kingdom of Poland. In both of these examples (as well as the long nineteenth century) conflicts could lead to changes in the boundaries of polities, but almost never to their actual disappearance. Indeed, it was the breakdown of this logic of political conflict after 1789 that made the French Revolutionary and Napoleonic Wars so terribly violent and shocking to those, such as Clausewitz, who experienced them. Nothing like these conflicts had been experienced before in Europe (although elsewhere wars between Europeans and non-Europeans, in which losing parties saw the disappearance of their polities, were the norm).

Social systems—including societies of states—that use violence as a mechanism to determine relative rank and status will generate violence that is frequent, but limited in scale and scope. The reason has to do with the nature of domination in balance-of-power systems. Dominant entities seek maximum gains for minimum expenditure of resources, and violence is an inherently risky undertaking. If actors can achieve dominance and high status without the risks and expenditures associated with violence, then they will: violence only becomes a necessity if there is some dispute over the ranking system, and if violence is accepted as a legitimate mechanism to resolve disputes of this nature.

Conflict that seeks to maximize domination for minimal cost requires, by definition, a basic acceptance of the rules of the game by those engaged in the conflict. Therefore, such conflicts can only occur between individuals (or groups) that are fundamentally equal. This basic equality implies a level of trust that the players will accept the outcomes of violent competition as legitimate, and will not seek to use illegitimate forms of competition to advance their interests, because to do so would make the benefits of victory and the consequences of defeat uncertain and insecure. Put differently, this kind of conflict can only occur under stable institutional conditions where all concerned share limited goals and agree that a particular form of violence is a legitimate mechanism for conflict resolution. The entire structure of international relations since 1945 has sought to reserve conflict for legitimate units (states recognized by other states), using specific forms of conflict resolution to establish their relative rank and status. Predictably, we have seen few, if any, legitimate polities disappear due to conquest.

INSTITUTIONS CAN be understood as society’s sources of legitimate power configuration: they incentivize human behavior by providing templates of behavior to be followed, and by constraining and channeling behavior through enforcement mechanisms. Institutions’ power lies in their ability to affect individual behavior and associated outcomes. Changing institutional configurations requires overcoming the resistance of those who have vested interests in the status quo. A conflict over some aspect of the rules of a society is more than a conflict involving the specific individuals in a ranking system; it is about the nature of the ranking system itself. These conflicts involve the very nature of social order and therefore can, in some sense, be understood as “constitutional” in nature. This is precisely why the French Revolutionary Wars were so horribly violent: the French state demanded the elimination of the entire system of dynastic politics that then prevailed in Europe. There was, in effect, nothing to negotiate about.

Conflicts that involve an attempt to change some aspect of the institutional structure of society will meet with greater resistance, because what is at stake involves more vested interests. Why this should be the case has, again, to do with the nature of institutions. Institutions do not exist in isolation from one another, but instead in an entangling web with others. When challenges to the status quo are sufficiently threatening, the stakes are raised, as are the levels of mobilization and its consequent expression in resistance and violence. This implies that unlike limited conflict over rank and status, conflicts that involve the institutional structure of society by definition involve actors who reject their opponents’ fundamental equality.

Unlike limited conflicts over rank and status, conflicts over institutional arrangements can be set along a continuum defined by the strength of a given challenge to the existing social order. Conflicts about religion tend to be at the more intense end of the continuum; those involving rulers and representative bodies more towards the middle; and those involving the precise configuration of property rights more towards the lower end. What all these conflicts have in common is that they tend to be harder to resolve, result in greater degrees of mobilization, and are characterized by more symbolic and physical violence.