What Makes a Good American? 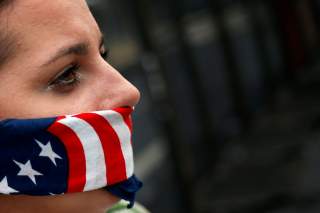 Age-old debates about patriotism and what constitutes a good American have taken on a new significance in the Trump Era. Trump often draws heavily on respect for the nation and its symbolic expressions, such as the flag and the national anthem. He points to taking a knee by athletes as an act of disloyalty and proudly defines himself as a nationalist.

Many Democrats, especially in the left wing of the party, view the very concept of “nationalist” as being associated with white supremacy and xenophobia. In a seminal essay in the New York Times titled “Patriotism: An American Puzzle,” Trip Gabriel describes how the Democrats’ view of patriotism is different from that of the GOP. Gabriel finds that Democrats consider dissent not as unpatriotic—but as the essence of patriotism. During his Senate campaign, Rep. Beto O’Rourke, former Democratic Senate candidate for Texas, declared that “I can think of nothing more American” than protesting. James Baldwin is quoted as saying “I love America more than any other country in the world and, exactly for this reason, I insist on the right to criticize her perpetually.”

The right to differ—to disagree—is indeed very American. However, when it is regarded as the essence of patriotism, one overlooks that the foremost meaning of patriotism is love of country. There is a world of difference between showing appreciation for the nation while seeking to cure its flaws and—-finding the nation deeply flawed. Thus, to view America as a racist society, dominated by white supremacists is not to dissent, but to question the very nature of the American enterprise—its basic goodness. It is a rather different perspective from one that holds that America is a “shining city upon a hill” that has developed some serious difficulties which urgently need to be remedied.

A telling example is the attitude towards the military. To argue that the military must be subject to civilian control, that the president should not go to war (or more precisely, continue to fight) without authority from Congress, and that the military should not discriminate against people based on sexual orientation can be readily reconciled with patriotism if one acknowledges that one is proud of millions of young men and women who are risking their lives to keep us safe. However, if one views the military with suspicion and refuses to collaborate with it, and considers working on security issues as unpatriotic (as many of the employees of high-tech firms do), then one crosses a line.

One can cherish the right to dissent, including the notion that burning the flag is a constitutionally protected expression of free speech. However, one must also note that if people seek to dissent while acknowledging their basic loyalty to the country, then they must recognize that there are some symbols that express such loyalty. They must therefore draw on numerous other ways to protest instead of assaulting the already-weakened expressions of national unity.

A similar distinction arises when one finds that many Democrats view pluralism and diversity as a major element of patriotism. Gabriel quotes a Democrat who gives voice to this viewpoint when she says, “I feel very patriotic that I want this country to get back to . . . a place of being who we truly are, which is a very diverse, very eclectic, beautiful mix of all kinds of people.”

While it is true that this is a nation of immigrants and that diversity makes us better in many ways, the essence of the American society has always been that diversity must be contained within a framework of unity. Thus, it is fine for Americans to express special concerns for the countries from which they, or their parents, immigrated from—as long as their primary loyalty is to United States. And it is fine for Americans to seek more equality for people of different ethnic and racial backgrounds, incomes, and sexual orientations, but not to deny the significant progress America has made, on all these fronts, one generation after the other.

In short, just as the GOP version of patriotism is truncated because it tends to view dissent as unpatriotic and diversity as undermining unity, the version of patriotism championed by many Democrats—especially in the left wing of the party—is flawed. It views the nation as basically defective, a nation that needs to transformed rather than reformed. Oddly, combining the two visions may provide a sound concept of patriotism: love of country with tolerance for a critical but loyal opposition; diversity bounded by a core of shared values and a sense of community.

Amitai Etzioni is a University Professor and professor of international relations at The George Washington University. He is the author of The Spirit of Community among other books.