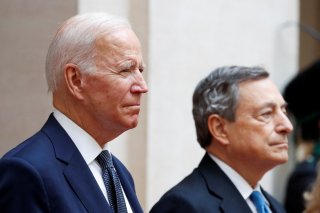 Italian prime minister Mario Draghi’s visit last week to Washington, DC, the first of a Western leader since the start of the Russian war of aggression in Ukraine on February 24, reaffirmed the absolute convergence of views existing between Italy and the United States. Draghi and the American president, Joseph Biden, speak the same diplomatic language: the centrality of multilateralism; a deep awareness that the rise of China, despite the focus of these weeks, still represents the actual systemic challenge for liberal democracies; and a strong emphasis on the mutual desire for a stable and robust transatlantic partnership. Indeed, the momentum for the transatlantic relationship is exceptionally favorable these days. For many years, the relationship between Europe and the United States has not been as cohesive as it has been over the past weeks.

Such cohesion is not completely surprising. Yet, at the same time, it could not have been considered automatic before the Russians launched the war. This is also the case for Italy: historically, Rome has been one of the European Union countries least hostile to Russia. Italy’s substantial dependence on Russia’s oil and gas obviously represented a problem. More generally, the fear of losing a lucrative market for some of its luxury exports raised concerns that Italy would have tried to safeguard its parochial interests, as the country comes out of two years of economic crisis, rather than rising to the challenge and aligning with its historical allies.

However, nothing like this happened. Like many other European countries, Italy was a bit slow initially in reacting to the inputs coming from the United States regarding the Russian military buildup and the imminence of the invasion. However, when the attack started, Italy immediately aligned with the United States and its European partners. Draghi kept Italy firmly in the transatlantic consensus as the war broke out despite the inevitable and significant costs. Moreover, with his long-time friend, the current Treasury Secretary Jennet Yellen, Draghi was the principal architect of one of the most sophisticated and effective sanctions implemented so far against Russia: the freezing of a large part of Moscow’s $643bn of foreign currency reserves.

Draghi managed to do so despite several attempts by members of his coalition to distance themselves, notably the leader of the League, Matteo Salvini, and the leader of the Five Star Movement (5S) Giuseppe Conte, who is also Draghi’s predecessor. As Italy is approaching its next general elections, scheduled by mid-2023, Salvini and Conte are becoming more and more vocal in trying to intercept that significant part of the public opinion that wants Italy to keep some sort of neutrality, Ukraine to surrender, and who think that Russia was provoked by NATO. For Salvini, this war serves “someone on the other side of the world wants to achieve their geopolitical objectives.” Salvini insisted that Italy should have not sent weapons to the Ukrainians and that sending even more weapons does not help the search for peace. He even said that when he “hears talking about weapons,” he is “never happy”—a somehow astonishing position considering that, just as recently as three years ago, the League wanted to ease the requirements for the purchase of self-defense weapons in Italy.

Moreover, Salvini also said that he is against Finland and Sweden joining NATO, a position surprisingly supported by the League’s heavyweight in the government as well, Giancarlo Giorgetti, who is usually considered the leader of the “atlanticist bloc“ inside the League. However, these positions not only contradict the government the two supports—which is firmly in favor of Helsinki and Stockholm joining the alliance—but also its own party, as two days before Salvini’s words, Lorenzo Fontana, the man in charge of the party’s foreign affairs portfolio, openly said the League supported Finland and Sweden joining. Giuseppe Conte, although in a slightly more confusing and erratic way, has more or less supported the same positions. In the early stages of the conflict, he was more outspoken in favor of Ukraine, justifying sending weapons to a population that is “exercising its right to self-defense.” However, he later started shifting his positions. He recently said that the 5S is now against the provision of heavy, lethal, offensive weapons to Ukraine, and he criticized the government’s decision to increase military expenditure and blamed Italy for “going to the tow of NATO.” Salvini and Conte, for different political, ideological, and—in the case of Conte also personal reasons—want to create problems for Draghi. Yet, neither of them has even tried to push these differences to create a government crisis.

They are trying to ride the wave of a public opinion and a media environment that has, in large part, taken pro-Russia and anti-American positions. Even the meeting between Draghi and Biden was seen, and analyzed, through this lens. For instance, in Washington, the perception of a total and unquestionable convergence was evident; but in Italy, some observers saw this meeting and its outcomes differently. They stressed that Draghi was eager to distance himself from the United States. For instance, by announcing his willingness to work for a ceasefire or by emphasizing that it is “Ukraine that must decide what the victory is, not us” alluding thus to the alleged existence of a different American agenda regarding the war that the Ukrainians are fighting against Russia. This approach reflects how many Italian experts support the idea that the Americans and NATO are fighting a proxy war against Russia. This view, which in many cases is similar to that promoted by Moscow, is often nurtured by fake news. Whether this spreading of fake news is voluntarily and a part of a systematic attempt to pollute the debate or is merely the result of weak professionalism is debated. Often, this fake news is fueled by poor translations of foreign interviews and the attempts by journalists, particularly on TV, to use this to stir debate, as was the case with the fake news that was repeated for days of Volodymyr Zelenskyy suddenly being willing to give up on Crimea against NATO’s will.

However, none of these allegations were supported by facts. In the case of the ceasefire, Draghi’s words—probably consciously and deliberately, according to Washington’s rumors—paved the way for the release of a similar statement by the United States, which indeed came shortly after. Defense Secretary Lloyd Austin said on Twitter that he had spoken with Russian minister of defense Sergey Shoigu for the first time since February 18, calling for “an immediate ceasefire in Ukraine.” In the second case, Draghi used precisely the exact same words that the White House had used two days before the meeting. In a statement to the Washington Post, the administration had clearly said that “it is up to the Ukrainians to decide what is a success,” remarking that the support will take place as long as required, and desired, by Kyiv.

This meeting showed how the United States and Italy are on the same page on many issues. The absolute convergence of this last period suggests that the relationship between Washington and Rome has never been so strong.

Dario Cristiani is a Senior Resident Fellow at the German Marshall Fund of the United States and a Senior Fellow at Istituto Affari Internazionali.