What Matters Most for the Navy’s Fleet? 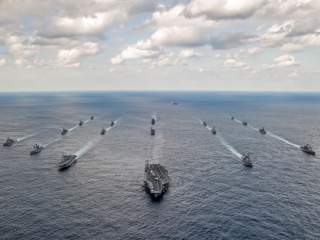 Earlier this month Secretary of Defense Ash Carter delivered a stinging public rebuke to Secretary of the Navy Ray Mabus, in the form of a memorandum directing Mabus to truncate acquisitions of littoral combat ships (LCS). Carter wants to cut LCS purchases from fifty-two to forty hulls. He ordered the navy to reallocate the savings to add firepower to the remaining forty, buy more carrier aircraft and guided missiles, and modify submarines to carry more cruise missiles.

Commentary on Carter’s directive was quick in coming, and it divided along very old lines: between partisans of quantity and quality, “presence” and “posture,” peacetime constabulary duty and wartime combat operations. At issue: LCS cutbacks will make it harder to build up to a 300-ship fleet. The fleet currently stands at 272 vessels, and the leadership is counting on sizable numbers of inexpensive hulls to make up the difference. Yet the LCS boasts little combat power in its current form. Better to add fewer ships with more punch, say backers of Carter’s plan, than more ships that do little to augment the fleet’s battle strength.

Just ask any navalist: more ships of all types is always better. But if you can’t afford all you want of all types, which do you favor? It depends on how you gauge the likelihood of war. If war appears probable, it makes sense to bulk up the fleet. If not, better to emphasize lower-end ships that can be built in large numbers on the cheap.

This debate reflects the division of labor within oceangoing navies. Think about it. Maritime strategy operates in peacetime and wartime alike. And vital national interests are at stake whether forces are exchanging fire or not. For the United States, peacetime strategy is about stewardship over the liberal system of seagoing trade and commerce. It’s about safeguarding freedom of the sea. Lightly armed surface combatants police the sea, fanning out to likely trouble spots to combat piracy, weapons proliferation, and trafficking in all manner of hazardous goods. More units equates to broader geographic coverage and safer seas for merchant traffic. That’s where LCS-like vessels excel.

Wartime strategy is about defeating foes and restoring free seas. Martial strife may break out in this age when oceans and seas are increasingly contested. War is far from unthinkable—meaning the U.S. Navy may well have to fight for control of the sea. You can’t exploit command of the sea, performing constabulary duty, unless you can win command of the sea—and unless you make prospective foes believers in your combat prowess. Preference, then, must go to high-end capability—to the capacity to deter or triumph—if you’re forced to choose.

What does this mean in hardware terms? The battle fleet needs formidable offensive and defensive armament, to be sure, but it also needs surplus numbers of men-of-war. Enemies will score hits, and put ships out of action. Accordingly, the fleet needs enough heavily armed—and thus pricey—combatants that it can take losses and fight on. It needs to be resilient amid increasingly menacing surroundings. The exigencies of wartime, then, demand quality and quantity.

Global navies like America’s, consequently, need both constabulary and battle fleets. But combat must come first. That should be the overarching precept for devising a mix between heavy and light combatants for stressful times.

Consult the sea-power canon for guidance. The goal of naval strategy for historian Julian S. Corbett is “permanent general control,” a.k.a. command, of the sea. Permanent control lets the fleet undertake amphibious operations, blockade hostile seaports, and assure the free flow of shipping along the sea lanes. To accomplish these good things, Corbett partitions a navy into the battle fleet, the heavy combatants that duel enemy fleets for nautical command; “cruisers,” meaning swarms of light combatants that control the sea lanes once the battle fleet renders embattled waters safe from enemy action; and the “flotilla” of small, unarmed or lightly armed ships that perform the mundane administrative chores coastal states must perform.

Corbett got in trouble with the Royal Navy old guard, his chief audience, by denying that the navy was a hierarchy with the battle fleet at its apex and the lowly cruisers and flotilla beneath. Instead he depicted the battle fleet as an enabler. Its “true function” was to act as protector for the cruisers and flotilla. Cruisers and flotilla craft outgunned nuisances such as pirates, to say nothing of merchantmen. They could police safe waters. What they couldn’t do—especially when alone on foreign station—was beat back enemy battleships or kindred heavy-hitters.

Accordingly, the battle fleet scoured the sea of hostile fleets so lighter craft could disperse, steaming off to do their “special work” unmolested. They, not capital ships, were the true executors of maritime command. So Corbett dethroned the battleship, and upended the old guard’s world. But if the battle fleet was insufficient, it remained necessary. No navy can exercise command before wresting command from its antagonists. Nor will prospective antagonists take it seriously—and thus be deterred—unless they see that the battle fleet boasts the ships, weaponry and tactical excellence to win should a sea fight ensue.

So count me with Team Carter on this one. Frigate-like combatants like the LCS, which fall into the cruiser or flotilla contingents under Corbett’s taxonomy, have their place in maritime strategy. In safe times they’re implements of choice. But these aren’t safe times. Low-end warships may not be enough to police important waterways in an age when great powers—not nonstate lawbreakers—pose the main threat to the maritime legal order. Rounding up Captain Jack Sparrow is one thing. Facing down the Chinese, Russian, or Iranian navy is quite another.

By all means, let’s station littoral combat ships or their ilk in, say, Singapore for constabulary and alliance-building duty. They’re fine for missions in permissive settings. But they do need a backstop in embattled settings, manifest in a vibrant, hard-hitting U.S. Navy battle force arrayed nearby. Without that backstop—without a fleet able to prevail in contested seas and skies—we’re trusting to China not to make trouble in places where it’s been doing precisely that. We’re assuming the United States, its allies, and its friends can enjoy the fruits of maritime command without defending it.