What the Mueller Probe Really Means 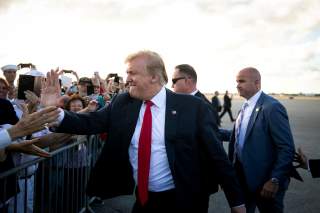 The Mueller Report, despite the best efforts of the chief author and his partisan investigative staff, is a bone-crushing defeat for the president’s enemies. There is not a whit of evidence that any American collaborated with any Russian to alter the results of the 2016 presidential election, and there is extensive evidence that the Trump campaign was the subject of enticements to collaborate and rebuffed all of them at all levels. The laborious bulk of Mueller’s minute description of completely inconsequential twists and turns in his investigation leaves the reader in no doubt of his thoroughness, and in no doubt of the complete absence of any case that could be made for collusion, let alone cooperation in an actual crime of attempting to influence the election illegally. As there is clearly no excuse for the special counsel to have been established, Mueller devotes the second half of his report to an effort to scratch together a virtual justification for it, by leading the reader through another maze to imply that there might be a conceivable case against the president for obstruction of justice. He acknowledges that he does not have a clear idea of the president’s motives, and so cannot judge if there was a corrupt motive, but cannot exonerate him either.

This is a reprehensibly unjust and shabby device. A special counsel is not in the exoneration business. If he thinks he has evidence of a crime by an incumbent president, that reaches the point of being beyond a reasonable doubt, he recommends impeachment. By this standard, nobody could ever be exonerated of anything—all you could say is that you don’t have enough, or in the case of collusion with Russia, any, evidence. Trump could, in theory, still be guilty of colluding with the Russians to rig the last election; there just is not a scintilla of evidence to support that conclusion. The criteria for obstruction are as enumerated by the attorney general in his summary of conclusions almost two weeks before the report was released: a corrupt act with corrupt intent in order to obstruct an actual or apprehended legal proceeding. There was no crime that Trump was attempting to withhold or shelter from just discovery and adjudication, no evidence of a corrupt intent, and no corrupt act. There is only, though Mueller did not have the elemental decency to put it so clearly, though the attorney general did, evidence that the president was frequently annoyed at being tormented and defamed as a suspect in the commission of a heinous offense, of which he was not only innocent, but which did not occur.

There was no excuse for the setting up of this special investigation. The previous special prosecutor legislation required a high confidence level that a crime had been committed. There was obviously no such thing in this case. If Attorney General Jeff Sessions had to recuse because of his presumably inadvertent, mistaken answers to questions in his confirmation hearings about speaking with the Russian ambassador, then he should have resigned. This would have allowed the president to name someone who could do the job through the difficulties that were clearly being fanned and seeded. The deputy attorney general, Rod Rosenstein, should not have buckled to Democratic pressure that was escalated by fired FBI director James Comey’s illegal leak to the New York Times designed to provoke the appointment of a special counsel. Having determined to do so anyway, Rosenstein should not have asked Mueller to perform that function, given Mueller’s entire identification with the FBI and close past association with Comey and Rosenstein, including in the Uranium One affair involving the Clintons. Rosenstein had recommended the dismissal of Comey and signed an application for renewal of a FISA warrant authorizing surveillance of Carter Page, a minor former advisor to the Trump campaign on a basis that he should have known was false-the Steele dossier. The official Comey-Rosenstein position was that that dossier was “salacious and unverified” but they had reason to know that it was defamatory campaign fiction commissioned and paid for by the Clinton campaign. Rosenstein had more reason to recuse than Sessions did, and Mueller had every reason to decline to take on the assignment.

Rosenstein should never have tolerated the assembly by Mueller of an investigative team that was so incandescently partisan and anti-Trump, and the acting FBI director, Andrew McCabe, was too conflicted, with his wife’s status as a Democratic state candidate in Virginia and protegee of the Clintons, and should never have had anything to do with any of it. All of these positions that should have been adopted but were not, should have been looked into by Mueller, instead of his wasting over a year in nonsense about obstruction, when it was obvious from the first day that there had been no crime to cover up or incite obstruction. He would have stayed closer to his assignment if he had chased up the Steele dossier and armed himself to report what the intelligence directors, John Brennan and James Clapper, and Comey and McCabe, and the third-ranking officer of the Justice Department, Bruce Ohr, were doing passing the Steele dossier to the media.  Instead, an echo chamber was created where the anti-Trump media and then the Clinton campaign, before and after the election, cited the fruit of their own leaks from a paid propaganda hit-job as ostensibly serious evidence of nearly treasonable wrongdoing by the man who, despite this unprecedented campaign of dirty tricks inflicted on him, was the rightful elected president of the United States.

Mueller failed at every stage except the reluctant and slightly conditionalized admission that there was no basis to the original subject of his investigation. What has been partially unearthed, with little thanks to Mueller, is that senior intelligence and FBI and Justice Department officials lied under oath to Congress, or lied to federal officials, and/or misled the Federal Intelligence Surveillance Court, all serious criminal offenses, (unlike any activity by the president), in order to influence the result, and then reverse the result, of a presidential election. In terms of subversion of the highest constitutional process, the selection of the president and vice president of the United States, this sort of activity, that Brennan, Clapper, Comey, McCabe, former attorney general Loretta Lynch and others appear to have engaged in, is the last stop before there are tanks on the White House lawn and military control of the media outlets. Mueller, having failed to do anything to address the real crisis that threatened the country, failed altogether, and compounded his failure by his sadistic entrapment of General Michael Flynn, and hounding of Paul Manafort and others, far beyond what was necessary or excusable, in an effort to extort a false inculpation of the president.

Even the most militant Democrats acknowledge the game of impeachment is up. Chairman Adam Schiff of the House Intelligence Committee doesn’t admit that there’s no ground to impeach, only that it can’t be done without any Republican collaboration. Speaker Nancy Pelosi comes to the same conclusion because “the president’s not worth it,” as if they had the ability to remove him but wouldn’t do it out of their high public responsibility and the president’s insignificance. The country is unlikely to have much patience with any more investigations of Trump. But it will be startled by the findings of the inspector general of the Justice Department, Mr. Michael E. Horowitz’s next report, and possibly by the mysterious special counsel John Huber (of Salt Lake City) looking into the Uranium and related activities of the Clinton Foundation for the last eighteen months, and by Attorney General William Barr and the Senate Judiciary Committee’s inquiries into how this destructive smear job was launched against the president in the first place. Some combination of those investigations is going to lay bare this entire sordid business, and some swollen and much-talking heads will roll.

Ideally, the final outcome of this complex of controversies will include a powerful disincentive to any future misuse of the intelligence services and Justice Department for partisan purposes; and a recognition of the dangers and undesirability as well as the ultimate illegality, of criminalizing policy differences. And the whole concept of special investigations will be confined to cases where there is clear prior evidence of a crime, and the investigation is defined in advance and does not wander, as the Clinton investigations did from speculation in Arkansas to the president’s peccadilloes in Washington. It is probably too much to hope that the media will be chastened by this debacle of their own professional credibility, which even Mueller condemned, and will try to win back some of the public confidence they have squandered.

Finally, all Americans should know that no one ever nominated to be president by any serious political party would ever have collaborated with a foreign power to rig an American election, or is ever likely to be tempted to try to do that. The whole concept was implausible from the beginning, and if Robert Mueller wasn’t capable of performing a serious public service with the immense mandate he was given, by exploring the misconduct of Trump’s accusers, he should have concluded eighteen months ago that the Russian collusion argument was bunk and closed shop. What follows now will be distinctly more interesting and germane than the ludicrous prelude.