What Must Change for Libya to Prosper? 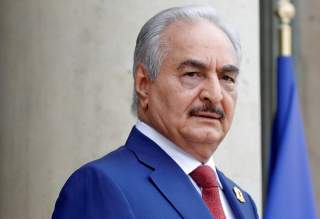 “They came, they didn't meet, they pronounced it a success.” This is the skeptical press line on the latest international bid to stabilize Libya—the Italian hosted “parley in Palermo” this month that was more fizzle than sizzle. After keeping the organizers in suspense, Libya’s most prominent figure, Marshal Khalifa Haftar, commander of the breakaway Libyan National Army in the east, showed up in Palermo, only to snub the hosts by holding side-meetings that excluded a number of Libyan rivals as well as Turkey and Qatar. The ballyhooed conference ended without an agreed statement, achieving only incremental progress in security and economic working groups.

The main accomplishment was trumpeting the upcoming ‘National Conference’—the ambitious vision of United Nations envoy Ghassan Salamé to give a vast cross-section of Libyans a voice in charting a path to stability for the troubled, terrorist-infested country. The grand National Conference would, in turn, serve as the catalyst for long-overdue elections.

Salamé’s shift in focus from top-level “leadership” to the citizen leader is laudable. The lesson of Palermo and its predecessor, the splashy summit of Libyan leaders in Paris last May organized by French president Emmanuel Macron, is that dragooning rival, senior Libyan figures into “agreement,” above all on elections, is futile. Too many of them benefit from the corrupt status quo and therefore have no incentive to move forward on reforms or elections.

Instead of fruitless top-level mediation, UN envoy Salamé and his colleagues have a chance to stabilize Libya from the bottom up. The challenge is to channel the energy, enthusiasm and wisdom of the Libyan participants into actionable steps that can stabilize the country. Unfortunately, the UN’s current aim is apparently to leverage the National Conference for pressure on the rival government in the east to approve a draft constitution and legislation required for elections.

If this is the stratagem, it, too, is likely to fail. Citizen participants may balk at going in this direction. Moreover, pointing the finger eastward only reinforces the sense of alienation from Tripoli in Tobruk, Bayda, Benghazi and other eastern towns that helped drive the wedge between rival governments in the first place. Ratcheting up the pressure on one side—when blame is abjectly shared—is no more likely to succeed in the National Conference than it did in Palermo or Paris.

A better approach is to craft a new international compact with the Libyan people that reflects their core demands for greater support for local institutions along with greater transparency from national ones. The truth is that the UN already knows in considerable detail—well in advance of the National Conference slated for January—the priorities of Libyan citizens and how they want to approach them. At the UN’s behest, the renowned Swiss-based Centre for Humanitarian Dialogue conducted a series of carefully-constructed consultations in-person, as well as exchanging online questionnaires. In all, the UN-sponsored effort reached an astounding 1.8 million Libyans, more than a quarter of the population.

The just-released report on these soundings shows that Libyan citizens, in sharp contrast to their polarized leaders, share a remarkable degree of common ground. Indeed, on the overarching question of power and resources—the main drivers of conflict in the country—the report found “unanimous agreement.” On these vital matters, Libyans wisely demand three things: effective decentralization, transparent management of sovereign economic institutions and national wealth, and equitable distribution of national resources. Finding ways of fulfilling each of these demands is the key to stabilizing Libya:

First, moving the country away from the intense concentration of power in Tripoli redolent of the Gaddafi era—one of the animating factors in the 2011 uprising, particularly in the country’s neglected east—is a sine qua non. As national level institutions have collapsed, particularly in the wake of the 2014 civil war, the only arm of government able to muster some services is at the local level. Rather than lead an all-out international effort to support local government, the UN has focused on the badly misnamed and mismanaged Government of National Accord (GNA) in Tripoli. Despite wholesale dependence on the UN for recognition, the GNA has been allowed to starve many Libyan municipalities. According to U.S. officials, the GNA prime minister, Fayez al-Sarraj, has openly relinquished any responsibility for providing financial support to municipalities. Instead, al-Sarraj’s Presidential Council has meddled on behalf of local cronies, recently passing rules allowing “party blocs” to dominate municipal councils, to the exclusion of minorities and rivals. In short, while the GNA drains the Libyan budget at the ineffectual national level, it undermines the fledgling work at the local level.

Second, with the largest oil reserves in Africa, and the ninth largest overall—matched against a population of only six and a half million people—Libyans should be living comfortably in a rentier state. Instead, the Libyan government has squandered much of its accumulated oil wealth through corruption, wages paid on a preposterously bloated and inefficient public employee payroll, and dubious payments to militias for “security.” The futility of paying “protection money” to armed groups burst into plain view in September when militias battled in Tripoli in part over access to lucrative, government-issued letters of credit (some of which conferred an instant 700 percent profit on the bearer through exchange rate manipulation.) At least 130 people died in the fighting, about a third of whom were women and children caught in the crossfire.

The UN negotiated a ceasefire in October and worked out reforms that effectively removed the profit from exchange rate manipulation—a significant achievement. But government disbursements to militias and other entities remain opaque and ripe for abuse. Palermo saw promises of training and modest steps toward creating a professional police force, following the appointment last month of a new interior minister. But there can be no sustainable progress on security in Libya—even through training and better leadership—as long as the state subsidizes armed groups over which it has negligible authority.

The capture of the state by these predatory groups, acknowledged by the UN and the World Bank, is a major obstacle to political progress. Marshal Haftar and his supporters are loath to put the Libyan National Army under command of a Tripoli-centric government that is dependent on unaccountable militias, with both criminal and extremist orientations. When Haftar retook key oil facilities in the east in June, he initially refused to place them under the recognized National Oil Corporation, justifying his decision on preventing “terrorists” from receiving salaries generated from oil revenues and paid out by the Central Bank.

No wonder that Libyans canvassed for the National Conference process insist that the country’s security institutions—all of them—are subject to the rule of law and to civilian and judicial oversight.

Third, as the source of 92 percent of government revenue, oil is Libya’s lifeline. Without sustained oil income, the World Bank warns that Libya may soon exhaust its foreign exchange reserves, forcing it to cut the spending on salaries and militia payments. Unfortunately, insecurity continues to plague Libya’s oil and gas infrastructure, which is subject to interruptions and enormously costly sabotage from armed groups and extremists. While Tripoli, through “its” militias, has access to a north-south line of oil and gas in the west that supplies Italy, Libya’s rich oil crescent lies in the eastern Sirte Basin, largely the province of Haftar. If it could ever be achieved, equitable distribution of oil revenue would curtail Libya’s political crisis and, in so doing, pave the way for investment and repairs that would boost production to full potential.

While full agreement on the distribution of oil revenue defies Libya’s leaders, the way forward is to insist on greater transparency of current distributions. The work in Palermo on economic issues, as well as the UN-mediated elimination of exchange rate exploitation, are proof that even self-dealing authorities can accept well-constructed international recommendations. In turn, greater transparency over oil revenue and government spending could lead to the political progress that the UN’s Salamé has been seeking.

The UN should be prepared to respond to these three, already revealed core demands by preparing a new strategy of bottom-up stabilization of Libya through municipalities, along with top-down transparency at the national level. The twin efforts will reinforce each other as empowered municipal leaders could be asked to break the political deadlock by drafting a legitimate, interim constitution as the basis for national elections.

Unlike national leaders who were either appointed or elected long ago or the Constitutional Drafting Assembly which was elected in 2014 and whose draft document has proven divisive, most municipal leaders enjoy a modicum of legitimacy. They have either been elected or will soon have to stand for elections. Already three municipalities have held elections this year without incident—a significant accomplishment in Libya given that the Islamic State in May targeted the National Election Commission in a highly symbolic attack. The process is underway for seventy more municipal elections to be held on various dates continuing through next year.

And unlike the fraught national elections, which would be held on a single date and which could revive regional and political tensions, low-key municipal elections are decentralized, held on staggered dates around the country. Local elections are more likely than national ones to be about services, not highly contentious matters like identity and zero-sum power contests between regions. Minorities are often able to gain election to municipal councils.