What the Navalny Affair Really Exposes 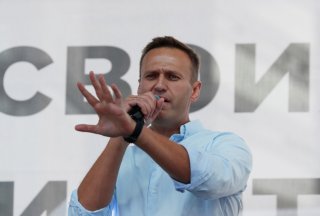 New details—and fresh questions—continue to emerge in the scandal over the poisoning of a high-profile Kremlin opponent.

Last week, CNN and investigative journalism group Bellingcat jointly published a report claiming that Russia’s Federal Security Service (FSB) had been tailing Russian opposition politician Aleksei Navalny since 2017. Through phone records, flight manifests, and leaked government databases, the report pieced together a timeline of how an “elite FSB unit” stalked Navalny throughout August and tried to poison him with a lethal substance. One of the report’s authors, CNN’s chief international correspondent Clarissa Ward, confronted a senior member of this FSB team—Oleg Tayakin—at his Moscow apartment. “Was it your team that poisoned Navalny?,” queried Ward as Tayakin slammed the door shut.

Navalny maintains that the Kremlin attempted to poison him with the deadly nerve agent Novichok, a claim widely accepted by Western states and institutions on both sides of the Atlantic. Russian President Vladimir Putin denied that there was an attempt on Navalny’s life at his annual major press conference late last week, but said that Navalny may have been monitored by the FSB as part of a counterintelligence investigation into his alleged ties with U.S. intelligence services. “There is actually nothing surprising about the fact that these implanted stories are taking place. They have always been and will always be,” said Putin at the conference.

Then came what appeared to be a new bombshell. Earlier this week, Navalny published what he claims to be incontrovertible evidence of a Kremlin-sponsored, FSB assassination plot against him: a conversation with one of the alleged assailants. Posing over the phone as an aide to Russia’s Security Council chief Nikolai Patrushev, Navalny says that he called one of the members of the elite toxins team involved in the alleged attempt on his life. The FSB agent, Konstantin Kudryavtsev, all but confessed to the murder attempt: “The flight is about three hours, this is a long flight… If you don’t land the plane the effect would’ve been different and the result would’ve been different. So I think the plane played the decisive part.” Kudryavtsev further confirmed that the FSB applied novichok through Navalny’s “underpants,” and later tried to destroy the evidence by applying special solutions to his clothes: “When we arrived, they gave them [the clothes] to us, the local Omsk guys brought [them] with the police.”

“I was amazed of course and couldn’t believe it,” said Navalny about the interview. “Simultaneously because of my luck and the way he so routinely says phrases like ‘the job was done well.’ He clearly does not consider himself a member of an assassination team, just an ordinary employee.”

But the report raises no shortage of questions: would an elite FSB assassin really confess to a murder attempt against a high-profile Kremlin opponent over an unsecured line, merely when prompted by an alleged superior who offered no proof of their identity? Given that Navalny did not mention using any tools to alter the sound of his voice, is it plausible for a team that stalked him—a public personality with an avalanche of readily accessible appearances—not to recognize the sound of his voice over the course of a forty-minute conversation?

With his published phone conversation, Navalny has staked out a unique position—a political adversary of the president of Russia who presents himself as a victim investigating alleged crimes against himself. This would raise a variety of procedural difficulties in any normal situation, but especially when considering that Navalny, as a Russian politician and opposition activist, stands to benefit from generating a certain image of Kremlin malfeasance. No one in the Western media seems to have acknowledged, let alone assessed, this novel situation.

If Navalny’s stance raises questions that have not been resolved, then the same must be said of the Kremlin. Its behavior and claims have been anything but persuasive. It never launched a state investigation, something it should have immediately carried out. After the revelation of the phone conversation, the FSB released a press statement accusing Navalny of promulgating “fake” information and collaborating With western intelligence services. “The so-called ‘investigation,’ published by A. Navalny in the Internet about the actions allegedly taken against him is a planned provocation, aimed at discrediting of the FSB and its employees, which would be impossible, without the organizational and technical support of foreign intelligence services,” the statement read. The FSB added that Navalny’s published phone conversation was a “fake,” before promising a thorough “assessment” and subsequent findings report: “The video with the phone call is a fake. The phone number spoofing is a well-known tool of foreign intelligence services, repeatedly utilized in anti-Russian actions, which rules out the possibility to determine the real sides of the conversation.”

The FSB statement is vague on certain key details. Precisely which aspect of Navalny’s phone conversation was fake? Is it the FSB’s position that Navalny falsified Kudryavtsev’s identity, or merely that Kudryavtsev was unethically manipulated into divulging classified information? Is the FSB prepared to offer conclusive proof to corroborate the Kremlin’s oft-repeated claims that Navalny is involved with “foreign intelligence services?”

Moscow went on to respond with targeted travel bans against European officials as a retaliatory measure against prior efforts by certain EU member states to implement sanctions on Russia over the Navalny affair. “We consider the adoption by the European Union at the behest of its leading Member States of illegitimate restrictive measures against some of our fellow citizens under the pretext of their alleged involvement in the incident with Russian citizen Alexey Navalny to be absolutely unacceptable,” announced Russia’s Foreign Ministry on Tuesday. “We reaffirm that any unfriendly action by Western countries will inevitably be met with an adequate response.”

Such truculent exchanges offer a reminder of the pattern that has developed around these episodes. One side offers opaque claims and allegations; the other, the Russian government, responds with obfuscatory language and outright prevarications. The result is that relations between Russia and the West also end up being further poisoned—and the antidote to mounting tensions seems further away than ever.